"Without the children, I would have killed myself." Kocher, a Yazidi mother from Iraq, survived two years in IS captivity. The atrocities she suffered left her full of rage. Three of her children are still missing.

Since her return, Kocher has been wearing black only. Time does not heal all wounds, not, when you have returned from hell. Since her liberation from the "Islamic State," (IS) Kocher, her husband Mahmood, and her five youngest daughters have been living on the barren plateau of Mount Sinjar in Northern Iraq.

They are refugees stranded inside their own country. Their recent torments are not spoken about in the family: "It's too late for me," says 40-year-old Kocher, only hinting at her pain.

The claws of the past

Her thoughts constantly return to her three older children — her two sons, Saadon, who is 22 now, and Firaz, who is 18, as well as her 15-year-old daughter Aveen. Their whereabouts remain unknown. Only the vague hope of a reunion keeps Kocher from succumbing to the clutches of the past.

During her many sleepless nights, she is tortured by the question of why she is among the survivors. Her five daughters, aged four to 13, are also terrified at night. For Kocher, there is no doubt that "without the children, I would have killed myself." 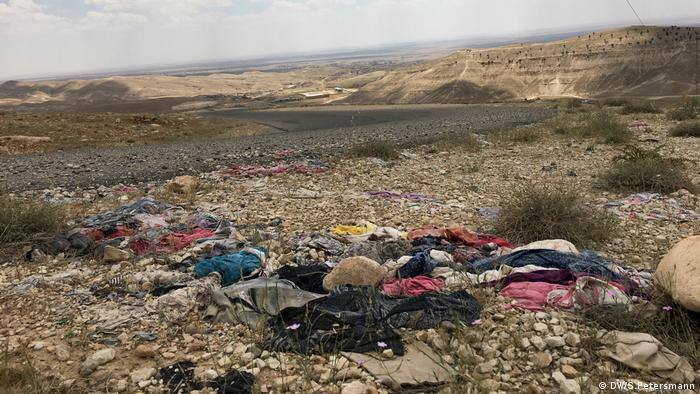 Kocher's nightmare began on August 3, 2014 when IS militia invaded the Sinjar region of Northern Iraq, which for centuries had been the heartland of the Yazidi minority. For the self-proclaimed jihadis of the "caliphate" Yazidis were "infidels" and "devil worshippers."

The invaders committed unimaginable atrocities, including mass executions, which the UN has classed as genocide. So far, however, no one has been held accountable.

In August 2014, some 50,000 terrified Yazidis headed up Mount Sinjar, the holy mountain of the Yazidi people, in a desperate bid to seek protection on the harsh and inaccessible terrain of a high plateau. Seeking refuge on their holy mountain seemed to be their only hope.

Together with other families from her neighborhood, Kocher and eight of her children braved the difficult serpentine road. Her husband Mahmood stayed behind to care for his elderly parents. 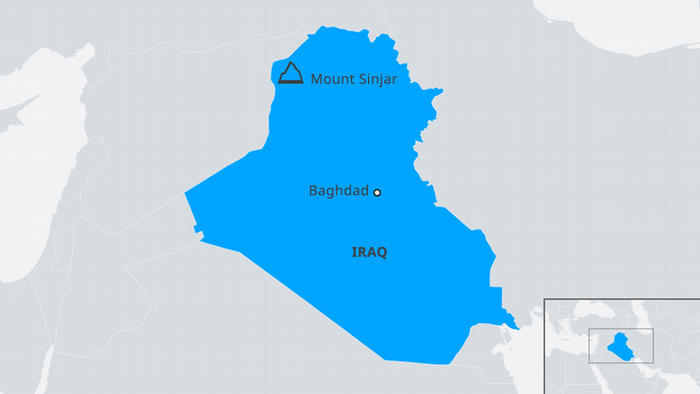 Kocher's group had made it half way up the mountain when they were intercepted by IS fighters and either killed or enslaved. Weathered clothes, torn underwear and faded shoes strewn along the roadside still document how Yazidis attempted to escape their fate.

"They also took older women than me and forced them to marry five or six men," says Kocher. Not once does she use the word rape. "They exchanged women for a cigarette and gave each other women as presents."

Time and again, Kocher and other mothers were separated from their children. She lost contact with her two older sons, her daughter Aveen was forcibly married to an IS fighter in Mosul. They only brought her back to see her mother once. The girl was dressed in black and fully veiled, with bridal make-up on her face.A further humiliation: "It is one of the great pleasures of a mother to put make-up on her daughter's face for her wedding." Since that day, there has been no further sign of life from Aveen.

The burden of liberation 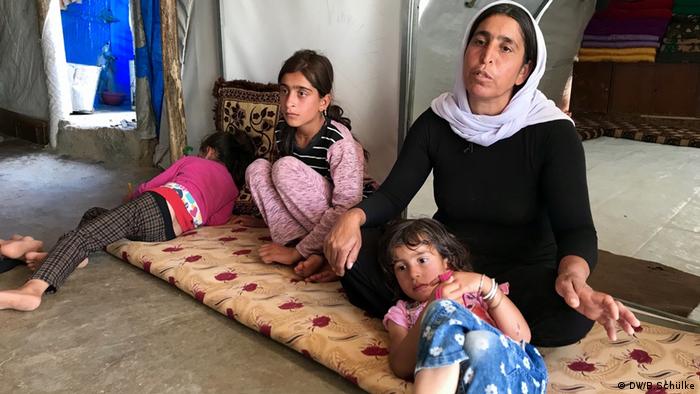 Kocher and her five youngest daughters "were sold like fruit from a pushcart," first within Iraq, then across the border into Syria. The last few months were spent with about 50 other women and children in a dark dungeon in Raqqa, constantly hungry and in fear of airstrikes.

Sometime in the summer of 2016, the group was freed — probably with the help of a ransom paid by the Kurdish regional government, but Kocher does not know the details of their release. She only remembers that they were put on buses and driven back to Iraq. 'IS' is believed to have enslaved some 7,000 Yazidi women and children. So far, only half of them have returned.

Kocher was reunited with her husband in the Kurdish region of northern Iraq. During their two-year separation he had joined Kurdish militias to fight 'IS' in Sinjar. The first time they saw him again, the youngest daughters Asma, aged four, and Basima, aged six, did not recognize their father.

"Sometimes, to find some relief, I cry like crazy,” says Kocher, "but never in front of the children."

"I'm not normal anymore, the doctors told me that no medicine can help. They say I think too much."

Since their reunification, the family has lived in a cluster of tents on Mount Sinjar. Up here, on the windy mountain plateau, an estimated 2,000 families — some 10,000 people in total — are still defying the elements. They are, quite simply, too scared to leave.

Nearly 70 mass graves have been discovered in the Sinjar region. On August 7, 2014 it was the plight of the desperate Yazidis on this mountain range that prompted then-US President Barack Obama to order airstrikes against IS in Iraq. Today, military victory over the so-called caliphate has been declared. But the world, it seems, has forgotten about the mountain and its people.

More than 200,000 Iraqi Yazidis have fled Sinjar, seeking shelter in the large refugee camps near the city of Dohuk in the autonomous Kurdish region, or setting off on the long journey to Europe. 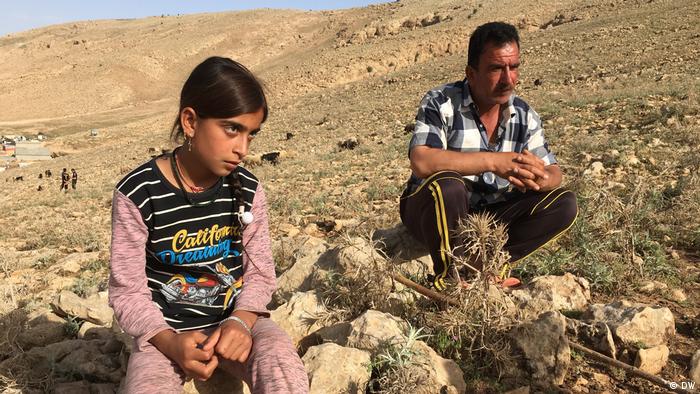 Mahmood and his daughter Zhiyan look after the family's sheep

Kocher and Mahmood have received 20 sheep from a Christian aid organization to help them make a living. For the girls, the animals are also playmates: they give them comfort and distraction. The family has enough to eat, and there is even a diesel generator and a TV. But their lives are haunted by the past.

After lunch, Kocher rolls up the left sleeve of her 10-year-old daughter Zhiyan's jumper and points to some rough letters scratched into her skin. "I tried to tattoo their names on their arms," Kocher recalls. "I did not want the children to forget what they were really called when they were taken away from us. They gave them new names after the forced conversion. But the man in charge found out and threatend to cut off her arm. I only managed to complete half of my daughter’s name."

Rambusi, the family's home village, lies below the southern flank of the mountain and can be reached in less than an hour by car. Before August 2014, the family owned a large house they had invested all their savings in.

Today the village is eerily quiet and desolate, there aren't even any stray dogs. Most houses have been destroyed — either blown up by 'IS' or hit by American air raids. Mahmood and Kocher sometimes go back to search for clothing and old pictures beneath the rubble.

Kocher says she does not care about the destruction. "The way they abducted small girls, just six or eight years old. How they gave them to groups of 10 or 12 men. A girl of 10 years who gets pregnant from IS, isn't that the most difficult thing?"

There is rage in Kocher's voice. Mahmood is silent. Both say that some of their former Muslim neighbors were among the perpetrators. Any reconciliation in their home village of Rambusi is, they say, inconceivable. 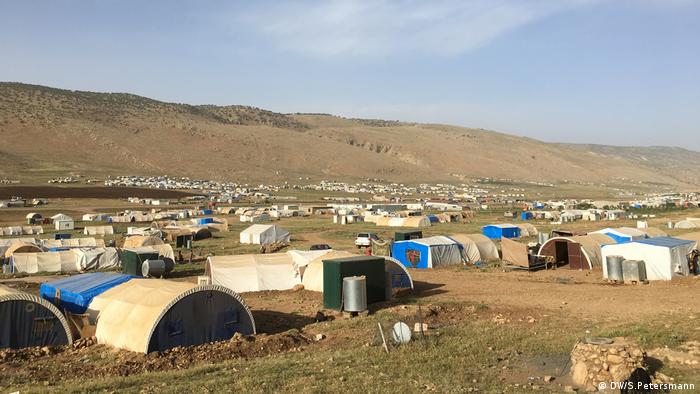 Uphill, in the refugee camp, Mahmood has his loaded Kalashnikov at hand. There's a deep, palpable fear that they will again come under attack, since after the genocide, who can the Yazidis trust?

There are weapons everywhere and Sinjar is caught between the Iraqi central government and the Kurdish regional government. There's also been infighting among the Kurds. There are many armed groups active in the area along the border with Syria, including Kurdish Peshmerga and Kurdish fighters of the PKK as well as the YPG, against which Turkey is fighting.

And then there's a new force making its presence felt, the Shiite Hashd al-Shaabi militia, which is supported by Iran. The Yazidis of Mount Sinjar — a tiny minority — are trapped in a myriad of conflicting interests.

Kocher, Mahmood and their children recently applied to an aid program that would allow them to migrate to faraway Australia. Of course, they don't want to leave their three missing children behind and there are those rare days when individual Yazidis return from enslavement, ransomed for more than $10,000 (€8,580) with the help of smugglers and human traffickers.

Mahmood has also contacted smugglers."If, with God's help, my children come back, we will leave Iraq immediately", Kocher says. "We are done with Iraq."

Germany will temporarily stop training Kurdish peshmerga forces in Iraq in the wake of the conflict between Baghdad and the Kurds. Germany has been a major partner of the peshmerga, providing them weapons and training. (18.10.2017)

No end to 'Islamic State' murders of Yazidis

"Islamic State" has been enslaving and murdering Yazidis in Iraq for two years. Advocates of the religious and ethnic minority say there's still no end in sight. (17.06.2016)