Angelina Jolie has said funding received by the UN refugee agency to help Syrian refugees has fallen sharply. The Hollywood star was visiting the Domiz Camp in Iraq, home to 33,000 refugees displaced by the Syrian war. 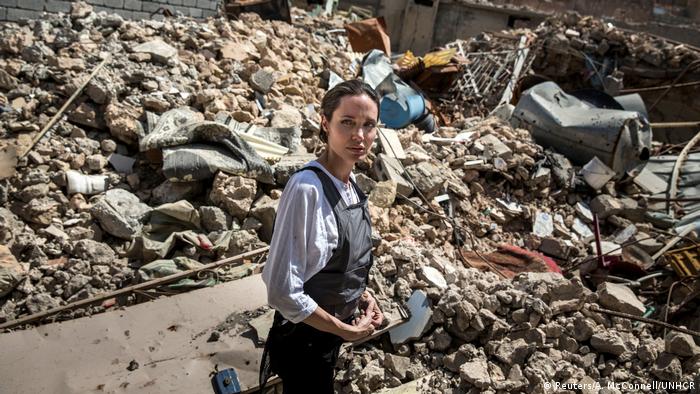 Syrian refugees are not getting the bare minimum of aid due to a shortage of funds, Hollywood actress Angelina Jolie said on Sunday.

Jolie, a UNHCR special envoy, said the world was failing to properly invest in the Syrian refugee crisis and relief for families.

The UNHCR Syria response was only 17 percent funded this year, a sharp drop from 2017 when the agency received only 50 percent of the funds it needed, Jolie told a news conference.

"There are terrible human consequences. When there is even not the bare minimum of aid, refugee families cannot receive adequate medical treatment," Jolie said. "Women and girls are left vulnerable to sexual violence, many children cannot go to school, and we squander the opportunity of being able to invest in refugees so that they can acquire new skills and support their families."

Jolie was visiting the Domiz Camp, in the semi-autonomous Kurdistan Region of Iraq, which is home to 33,000 Syrian refugees displaced by the Syrian conflict.

Jolie also stressed on focusing on conflict prevention rather than responding to its repercussions.

"I hope that we can find the strength to find a better way forward together: so that we move into a new era of preventing conflict and reducing instability, rather than simply struggling to deal with its consequences," she said.

She met families from western Mosul and walked through war-ravaged streets.

"This is the worst devastation I have seen in all my years working with UNHCR. People here have lost everything," Jolie said in a UN statement.

"They are destitute. They have no medicine for their children, and many have no running water or basic services," she said. "I hope there will be a continued commitment to rebuilding and stabilizing the whole of the city. And I call on the international community not to forget Mosul."

Jolie has been working for UNHCR since 2001. This was her fifth visit to Iraq, UNHCR said.

The small country of Lebanon has been home to Palestinian refugees since 1948. In recent years, it's also become a haven for people fleeing war in Syria and resources are now becoming scarce. DW's Diana Hodali reports. (14.05.2018)

Thousands of Syrian women are believed to be incarcerated in the Assad regime's prisons. Little is known about their fate, but those who manage to escape tell tales of horror. DW's Julia Hahn reports. (30.04.2018)

The EU has unlocked €3 billion ($3.7 billion) for projects to help Syrian refugees in Turkey in a second payment from the 2016 migration deal. More than a million refugees have already benefited from the funds. (14.03.2018)