Iraqi armed forces out for revenge in Mosul

The recapture of Mosul has brought with it the torture and mass execution of "Islamic State" fighters and their families. The government is looking the other way, and it seems the US-led anti-IS coalition is too. 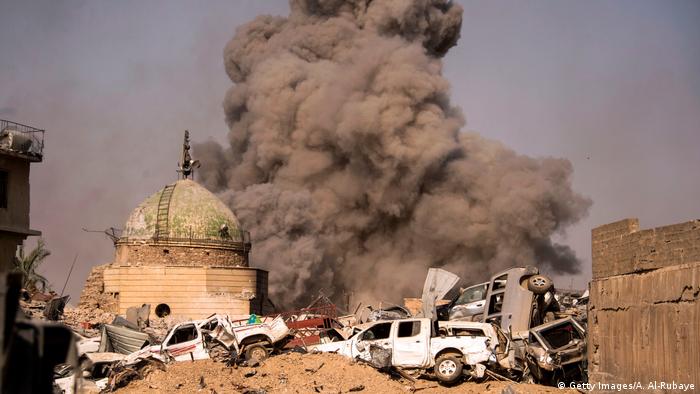 Iraq's anti-terror unit last week reportedly captured foreign "Islamic State" (IS) fighter Linda W., a 16-year-old from the eastern German town of Pulsnitz. Information thus far has been contradictory. One thing, however, is clear: If she was among those caught, she can consider herself lucky to be alive.

A number of women in the terrorist militia wore explosive belts and at least 2,000 people were killed by coalition bombs in Mosul, according to the nongovernmental organization (NGO) Airwars, which monitors civilian casualties resulting from international airstrikes in Syria, Libya and Iraq. Furthermore, Iraqi forces have been credibly said not only to be torturing and executing IS fighters, but also their families.

Bodies in the river

At least that is what independent activist outlet Mosul Eye stated on Twitter. The anonymous blogger reported from Mosul at great personal risk during IS' reign in the city. This week, Mosul Eye published a disturbing 38-tweet thread which accused Iraqi security forces of labeling every civilian they found in Mosul's old city as IS fighters and murdering them in mass executions.

One reason Mosul Eye gave: There had been no contingency plan for dealing with IS members' families. Videos shared on social media show the torture and execution of prisoners of war, and they suggest that not only were entire city blocks destroyed in the violent street fighting in Mosul's old city center, but that laws governing human rights and war were also ignored. Britain's Guardian newspaper had already reported on Saturday that corpses were floating down the Tigris river from Mosul.

Acts of revenge against suspected IS fighters and their families was also a topic of discussion a meeting this week of the United Nations Security Council in New York. Jan Kubis, the UN Special Representative for Iraq, expressed his concern over the "rising popular sentiment in favor of collective punishment of families perceived to be associated with Daesh (IS)."

Belkis Wille, from the NGO Human Rights Watch (HRW), confirmed that was the case in an email to DW. She described numerous detailed accounts of torture and executions carried out against suspected IS members. Wille said she was especially concerned with the dramatic shift in attitude on the ground: The Iraqi armed forces no longer feel the need to keep their deeds secret.

Wille went on to write that she has yet to meet a single politician in Baghdad that has spoken out in favor of a serious investigation into such cases of abuse. In a July 14 response to an HRW request, an advisor to Iraqi Prime Minister Haider al-Abadi told the human rights watchdog that the government would announce measures against the officers in question. But he added that those steps would be taken at a later date so as not to disturb "current congratulatory messages for the victory." 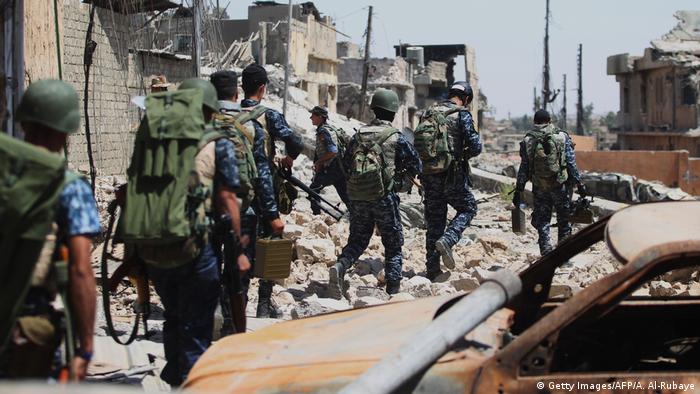 Wille said that she does not know of a single case of anyone from the Iraqi armed forces being held accountable for torture, murder or extrajudicial execution. She stressed the fact that the recapture of Mosul was a joint operation carried out by the Iraqi military and the US-led anti-IS coalition, and the coalition must therefore make sure the troops it is supporting are abiding by martial law. The coalition cannot provide air support for war criminals, Wille said.

A spokesperson for what has been dubbed "Operation Inherent Resolve" told DW that the coalition had no way of confirming the veracity of accounts of wrongdoing. HRW used satellite data from a video to pinpoint the exact site of an execution in which soldiers beat a man and then threw him off a cliff. Soldiers can also be seen shooting a different man who is lying on the ground.

The military spokesperson did, however, insist that any breach of martial law was unacceptable and must be fundamentally and transparently investigated. He also said that Prime Minister Al-Abadi recently announced a "zero tolerance policy towards transgressions within the Iraqi armed forces." Furthermore, a special commission has been convened to look into cases of military misconduct.

Renad Mansour, an Iraq expert for the British think tank Chatham House, is doubtful that the commission will have any effect, saying that there is a feeling of impunity within the armed forces. He told DW that the entire concept of the rule of law has made the situation even more nebulous.

"What we have is an extremely traumatized society with no solid legal institutions capable of producing truth and reconciliation," Mansour said, adding the soldiers feel that they are the only ones that can provide justice because the judiciary is so deficient.