UN experts believe it will take decades to clear the Iraqi city of Mosul from explosive hazards. But, a year after liberation from the "Islamic State" group, ever more refugees are returning. Sandra Petersmann reports. 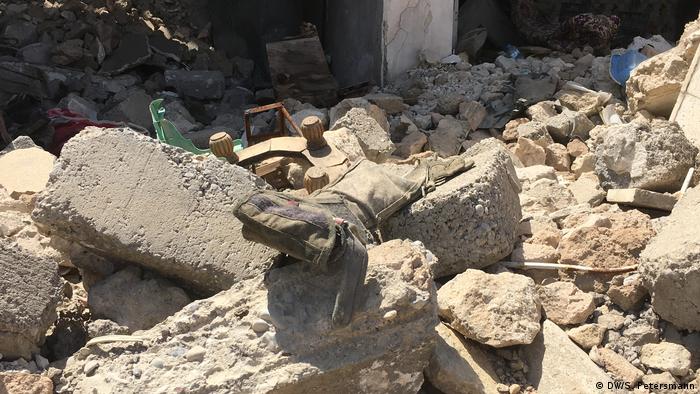 The chirping of the birds seems out of place in this unreal, man-made landscape of disemboweled homes and deep craters. Emerging from the rubble are rusted, crushed cars — turned into molten balls of scrap by the all-dissolving heat generated during the bombing raids of the final battle, which raged here a year ago.

The light breeze that blows through the Old Town in Mosul on this hot summer day only intensifies the stench of decay, which is hard to bear. It's still unclear just how many people were killed here in the fight for liberation from "Islamic State" (IS) rule. Current estimates vary between 10,000 and 40,000 victims. To this day, bodies are still being recovered from the rubble.

Zahra Abdul Qader, a 25-year-old mother of four, endured the IS occupation in Old Mosul almost until the last day of the final battle. She recalls constant hunger, relentless US bombing raids, house-to-house fighting and the hissing bullets of snipers piercing the walls.

It wasn't until the Iraqi army conquered Zahra's street that she and her family dared to venture across the Tigris River to seek safety in the already liberated eastern part of the city. Here, many areas look like as if the war had never happened. Now though, all their funds are used up, and their financial hardship has forced them to return to the apocalyptic ruins in the bombed out western part. The family is left with two ramshackle rooms from which to eke out a living. 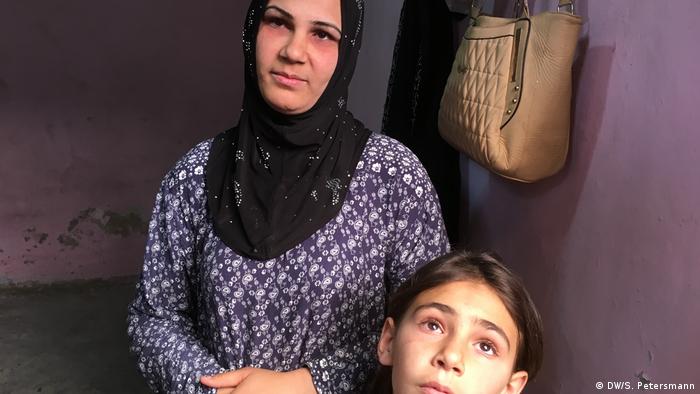 Returnee Zahra worries about her children

Zahra's husband, Ahmed, works as a vegetable seller, and he sets out with a handcart every morning. Against the odds, some stalls and improvised markets are once again selling goods in Old Mosul. Meanwhile, Zahra stays home and doesn't let her four young children out of her sight. "I follow them everywhere; I never let them out on the street alone. I'm very worried about them," she says.

Only a few days ago, members of the civil defense force discovered an unexploded mortar shell in the neighboring house. "I hope that everything will be the same again as before, that our houses and mosques will be rebuilt," says Zahra. "I just wish for a normal life in peace and quiet."

The Old Town on the western banks of the Tigris was the last IS stronghold in Mosul, Iraq's second-largest city. And it was from here that, in June 2014, IS leader Abu Bakr al-Baghdadi proclaimed his self-styled caliphate. Back then, Mosul had an estimated population of two million people. 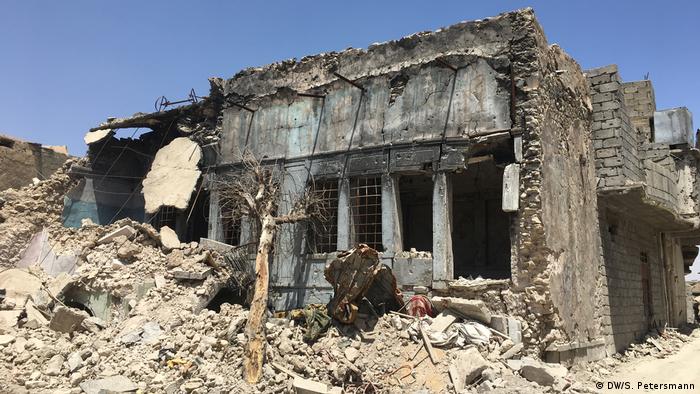 Most houses in Old Mosul have been destroyed

Today, no alley in the old walled city is unscathed. In front of a bombed-out house, next to a pile of stinking blankets and rusty tin cans, about a dozen mobile phone chargers and a car battery lie in the rubble. A few steps further on are small, dust-clogged walkie-talkies, one discarded on a vaulted windowsill. A little further to the left, a crumbled miniature version of the Quran. Then a tattered protective vest, barely visible on the surface of what once used to be tarmac.

It's quite possible that the remains of such vests contain explosives and metal ball bearings. And if such a vest were to explode, those ball bearings would be shot through the air, becoming deadly projectiles spraying the vicinity.

Mark Warburton is an operations manager with Optima, a private firm responsible for clearing unexploded bombs, mortars, rockets and booby traps on behalf of the United Nations Mine Action Service (UNMAS). "We have found everything here that can be commercially made, from hand grenades through to (American) 500-pound air-delivered bombs to everything that IS can improvise: improvised grenades, improvised mortars, improvised rockets, everything," he says. 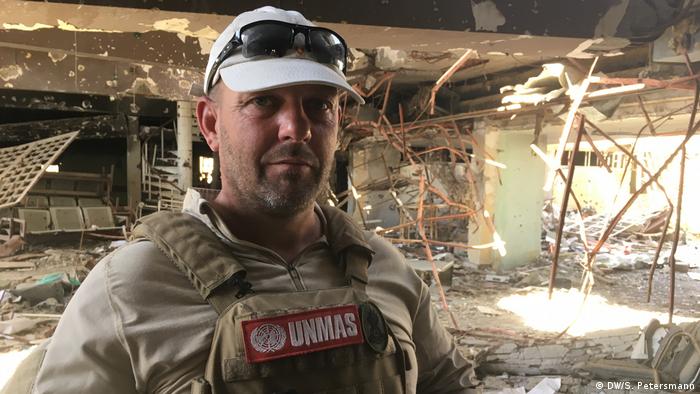 Mark Warburton has been amazed by the scale of production

The British ex-soldier and explosives expert has gained a lot of experience in war and crisis areas around the world. But what he finds in Mosul's Old Town surprises him.

"The improvised explosive devices are very well-built, like in other conflict regions, but here they were produced on a phenomenal industrial scale," Warburton says. "It wasn't just a few people building them here and there. This has been a real industry, to build them to this scale and this amount."

Between the beginning of December 2017 and the end of May 2018, Warburton and his men cleared about 33,500 explosive hazards in 790 operations in Mosul's Old Town, including 610 explosive belts.

"We had to remove about 300 of these belts from the bodies of fighters before we could defuse them," Warburton says. "This is not a pleasant job, but the bodies need to be removed and we need to make it as safe as possible for any follow-up teams."

Walking through the old walled city, Warburton and one of his teams pass 10 white body bags. After a few more steps, they find another suicide belt which appears to have recently been placed atop another pile of rubble.

Warburton shakes his head. "I walked this exact route this morning before you came, and we had eight improvised grenades handed in to us. And now there is this suicide belt. That's the sort of threat level that people are coming back to. They find things, and they just put them by the side of the road," he says.

The final battle to liberate the city lasted for nine months, from October 2016 to July 2017. According to some accounts, it was the heaviest urban battle since World War II. "It will take decades and decades to rid Mosul of explosive hazards," says Warburton. "We're still finding World War II bombs in our countries today," referring to the UK and Germany.

His gaze traces across the horrific landscape — an estimated 8 million tons of debris. Hidden among it all: Aerial bombs, mortar shells, car bombs, grenades, explosive belts, and even tempting teddy bears filled with explosives. In addition: trip wires, switches and detonators that are mounted on top of booby traps.

One step can be enough; also potentially just as deadly: Reaching out to pick a nondescript water bottle. "Any attractive item that somebody might pick up can connect the circuit and initiate the device," says Mark Warburton. 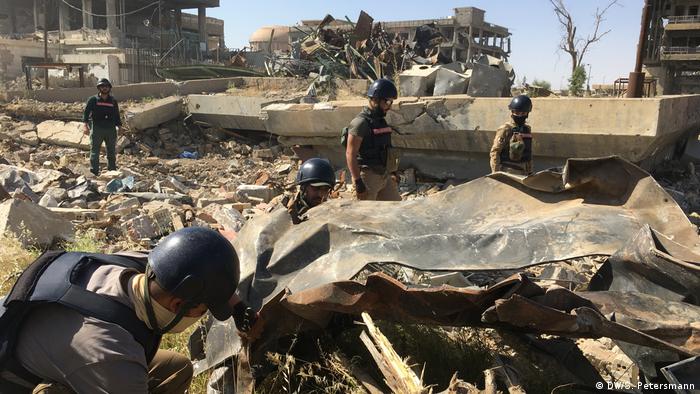 Searching for explosive hazards in Mosul

In Old Mosul, just four clearance teams are currently in action for UNMAS. The 60 men work under armed protection to prevent possible attacks by IS sleeper cells. Their focus is on mitigating explosive threats so that infrastructure can be restored — a potentially dangerous cycle.

"[We are clearing] schools, health centers, water treatment plants, electricity stations, so that the authorities can take care of immediate needs, and that in return invites people to come back," Warburton explains. Returnees like Zahra and her family who have nowhere else to go. "I'm glad that the war is over, it's much safer here now, but these empty ruins are also scaring us. And so are the dead bodies in the rubble," Zahra says.

In total, more than a million people are said to have fled Mosul, including 700,000 from the western part of the city. But UNMAS is not responsible for clearing the ruins of private homes. It does not have the capacity. There are just too many conflicts around the world, and financial resources are scarce.

"UNMAS Iraq are sort of the leading authority on this now. What we learn here will also help us in other missions, for example in Syria," operations manager Mark Warburton says matter-of-factly, before leaving to defuse the suicide belt.

Are the US and China tiptoeing towards an Indo-Pacific Cold War?

India: Why many medical students are taking their own lives