Where can Iraq's Yazidis live in the future? Their home, Sinjar, has been liberated, but the "Islamic State" genocide that began on August 3, 2014, has left an indelible mark on their city. Sandra Petersmann reports. 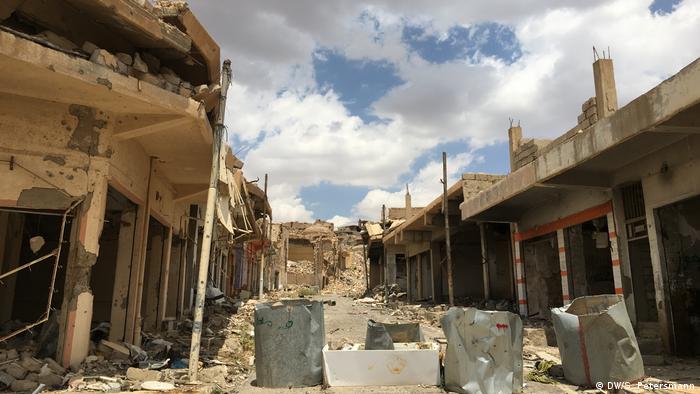 It's as if someone had taken a huge sledgehammer and beaten the hell out of it. Ruins and yet more ruins. Pulverized concrete and smashed bricks as far as the eye can see. There is hardly anything left of Sinjar, once the largest city in the Yazidi homeland in northern Iraq, which bears the same name.

With the backing of massive US airstrikes, Kurdish fighters managed to free Sinjar city from "Islamic State" (IS) tyranny in November 2015. It had been in IS hands for just over a year. But it was above all the US air raids that almost wiped out the unofficial capital of the Yazidi homeland. The fact that the liberation was followed by more Turkish airstrikes has only reinforced deep-rooted fear within the Yazidi community. There is a palpable sense of a lost homeland.

In Sinjar, time seems to have stood still. There is no trace of organized reconstruction in the town. Compare that to Mosul, only 120 kilometers (75 miles) to the west. Iraq's second city was freed from IS terror just a year ago, but a visible building effort is well underway. Sinjar by contrast was liberated almost three years ago. The main streets were cleared of rubble. But since then, little else has happened.

Most of the smaller settlements that surround the city are also destroyed and deserted. Herdan is one of those. On the access road to the village, four mass graves have been provisionally sealed off with flimsy green mesh fencing. Three hundred families once lived in Herdan, says village elder Hassan Khalaf. Today there are just 60. Khalaf has no idea about the whereabouts of two sons, a brother and four nephews. Are they among those buried in the mass graves? Khalaf doesn't know. He points to the junction a short distance beyond the graves that marks the end of the village. That, he says, is where IS fighters took Yazidi villagers to execute them: "They must have taken some 500 people from here." 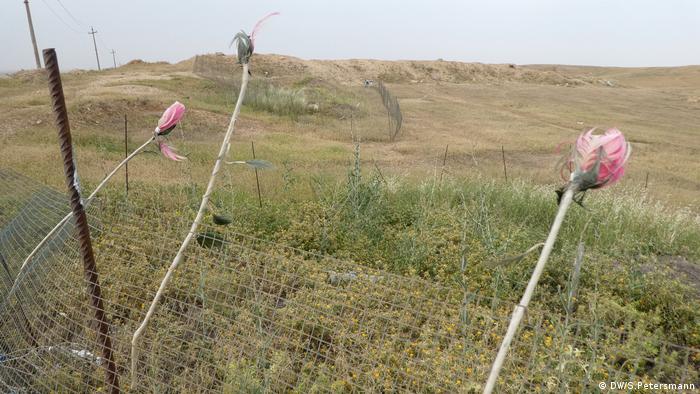 Why hasn't there been any help for the locals? Why is nobody answering their questions? "Because we Yazidis are only fourth- or fifth-class citizens of Iraq," says Fahad Hamid Omar, the acting mayor of Sinjar. "Because the people who used to be responsible for safety and security here were not interested in the people of Sinjar," he adds after a longer pause.

The stocky man with a crew cut and moustache stands on the flat roof of his official residence, his eyes gazing across the ruins. He is responsible for an estimated 3,500 families. Mayor Fahad has only been in office for a few months and is himself a Yazidi. He wears a simple uniform and repeatedly emphasizes that he himself fought against the jihadis. He often uses the inclusive "we" when he talks. We, the Yazidis of Sinjar.

Unlike his predecessor, Mahama Khalil, Fahad does not have close ties to the government of the Kurdish autonomous region in northern Iraq. Instead, he answers to the central government in Baghdad. "We want Sinjar to be managed directly from Baghdad and no longer by the Kurds," he says. That's how it has been for the past 15 years. The Yazidis were hostage to the developing power struggle between the powerful Kurdish clan of former President Masoud Barzani and the central government. Since the controversial referendum on Kurdish independence in September 2017, the fronts have only hardened still further. 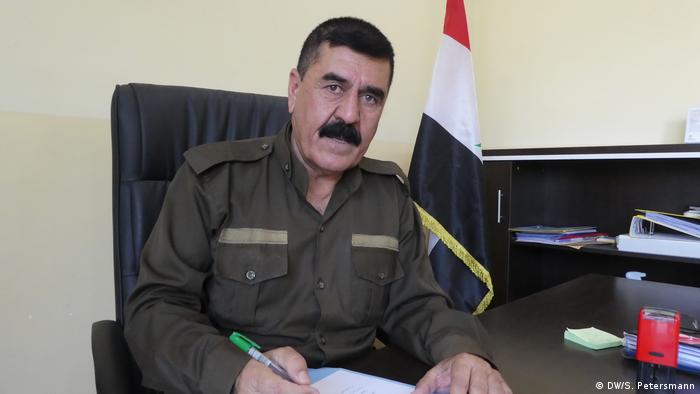 "If we had belonged to Baghdad from the beginning, this would never have happened to us," says Fahad. This? He's referring to the extermination campaign launched by IS against the small ethnic-religious Yazidi minority — a genocide recognized as such by the United Nations. There is contempt in his voice for the Kurdish autonomous government in Irbil and their peshmerga fighters. He accuses them of betrayal.

The day that changed everything

The first IS fighters reached Sinjar at dawn on August 3, 2014. The terror militia advanced in a convoy of armored US Humvees and other military vehicles previously captured from the Iraqi army. As recently as June of that year, the Sunni fundamentalists had conquered Mosul, the second-largest city in Iraq, and proclaimed their "caliphate" from there. Now they aimed to annihilate the Yazidi people — a denomination they branded as "unbelieving devil worshippers."

Sinjar was easy prey as it was disputed territory. On paper, the area was administered by Iraq's central government. In practice though, the only military presence consisted of Peshmerga fighters loyal to northern Iraq's Kurdish regional government. But when IS forces approached, they hastily withdrew without fighting. The Yazidis were left unprotected against the jihadis. So far, around 70 mass graves have been discovered in Sinjar.

No one knows exactly how many Yazidis were murdered, but Mayor Fahad says that at least 15,000 are dead or missing. Around 7,000 women and children were abducted and enslaved. More than half of them are still missing.

In historic terms, this was not the first attack on the minority in Iraq. But it was probably the most far-reaching. The global Yazidi organization Yazda estimates that in August 2014 about half a million Yazidis lived in Iraq. The Sinjar region had an estimated 250,000 inhabitants, its capital about 80,000. They were mostly Yazidis, but also Muslim Arabs, Kurds and Turkmens. 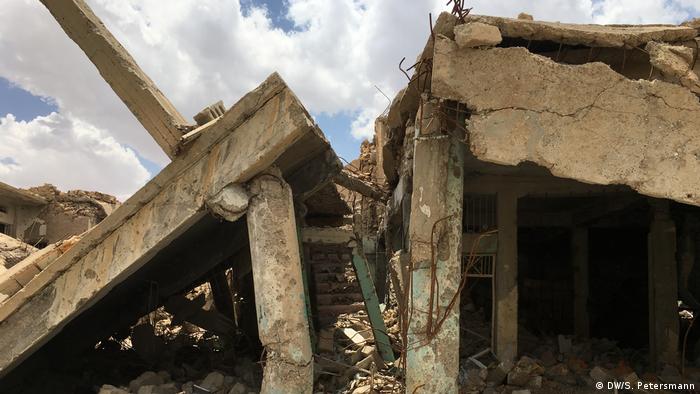 Today most Yazidis have fled Sinjar, seeking refuge in the large refugee camps around the northern Iraqi city of Dohuk. They have also fled to Kurdish areas in Syria and Turkey. A significant number managed to reach Europe, specifically Germany. Among the 31,379 Iraqis who applied for asylum in Germany in 2015, there were 15,256 Yazidis, Germany's Federal Office for Migration and Refugees told DW. In 2016, 97,162 Iraqis sought asylum, including 37,655 Yazidis. Last year, applications from Iraqis totaled 23,605, including 11,200 Yazidis.

Caught between all fronts

It was fighters of the banned Kurdistan Workers' Party (PKK) and Syrian Kurds of the YPG militia who managed to secure an escape corridor in August 2014. At that time 50,000 refugees were struggling to survive on the high plateau of Mount Sinjar, the holy mountain of the Yazidis. It was also leftist PKK and YPG forces that armed and trained Yazidi militiamen. The Syrian YPG is linked to the PKK group, which has its roots in Turkey and is listed as a terrorist organization by the US and the EU. 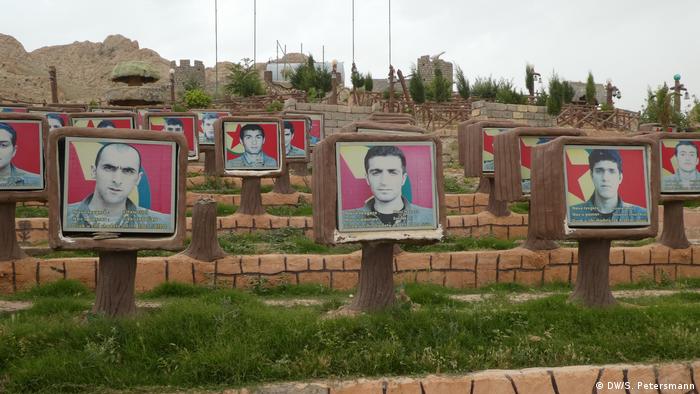 In Sinjar, countless graffiti celebrating imprisoned PKK leader Abdullah Ocalan serve as reminders of the "heroic fight" against IS. At a "martyrs' cemetery" on Mount Sinjar, where 10,000 Yazidis still live in tent settlements, flags with Ocalan's portrait flutter in the wind. Many of the fighters buried here lost their lives between August 2014 and November 2015.

PKK, YPG, the US Air Force and the Peshmerga fighters of the autonomous Kurdish region in Iraq were all involved in the liberation of Sinjar. The Peshmerga from Irbil returned after receiving weapons and military training from abroad, including from the German Bundeswehr. The rival Kurdish militias initially all remained in the region after the joint liberation, and soon rivalry led to skirmishes.

In October 2017, shortly after the controversial independence referendum, the Peshmerga from Irbil again withdrew as the Iraqi army and its allied Shiite people's militia Hashd al-Shaabi took command of Sinjar. The Shiite Hashd reportedly receives massive support from Iran. The main road through Shingal connects the former 'IS' strongholds of Mosul in Iraq and Raqqa in Syria. Weapons and fighters travel along this route. Iran is one of the major parties in Syria's war.

PKK and YPG forces also pulled back when Turkey openly threatened a military invasion like the one it had launched in Syria's Afrin region. Turkey is determined to prevent Syrian and Iraqi PKK forces from controlling a contiguous territory. As things stand, Sinjar is being crushed between national and international power struggles. 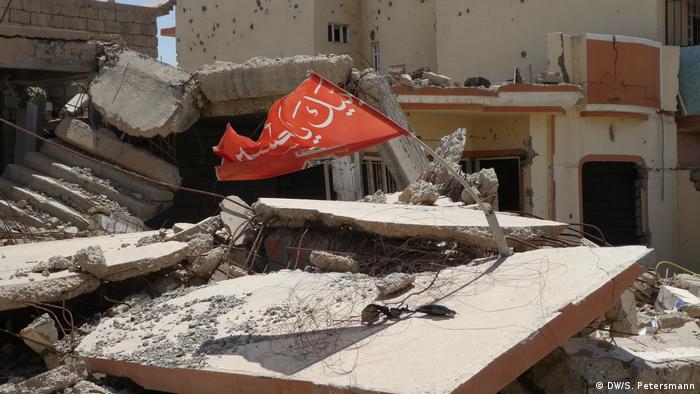 So who can the persecuted Yazidis trust after the genocide? "As long as there are thousands of competing political groups, people will not come back," says Stewan Elias as he cuts glass panes. The 24-year old used to be a teacher. That was when there were still schools in Sinjar. These days he ekes out an existence repairing windows. The problem is: there are virtually no funds for the reconstruction of the city. "People just don't believe it's safe in Sinjar," says Elias. Why then did he leave the Mount Sinjar refugee camp to live in the ruined city? "Because I only have this one home."

That sentiment is echoed by Baran Kharo. At first, the young woman with a red-haired ponytail does not want to answer any questions. Her uncle's family is still in the hands of IS, she whispers. She says life is no longer possible in Sinjar: "There is hardly any electricity here and the water is very bad and bitter." She is afraid of the blind shells and the booby traps that nobody removes. "There are rotting bodies and bones around here, too." Nearby, two young fighters of the Hashd militia are standing guard at an intersection. "We are very scared," says Kharo.

Officially, the presence of the Shiite militia units from southern Iraq does not worry Mayor Fahad. After all, he owes his appointment to them. It is not the central government in Baghdad, but mainly Hashd al-Shaabi militia fighters that are visible in Sinjar. "The IS has done great injustice, not only to the Yazidis but also to our Shiite brothers," he says. His main worry is the Sunni Arabs and Turkmen in the area. "Many Muslim neighbors have supported IS," he says.

Fahad Hamid Omar wants international protection and his own Yazidi army. He also has a message for the German government: "If the Germans want to help us, they should do it directly instead of sending weapons and military trainers to the Kurds."

Only a few days ago, the mayor would have quite happily shot at Sunni Arab farmers who herded their cattle onto a Yazidi mass grave. "These people who helped IS to murder us are now grazing their cattle on our bones," he complains bitterly. He's even calling for the construction of a "protective wall" to separate Muslims and Yazidis.

Sinjar, it appears, is just as torn as the rest of Iraq.