Iraq and German giant Siemens have signed a framework electricity agreement potentially worth billions of dollars. The Iraqi premier was in Berlin to meet with Chancellor Angela Merkel. 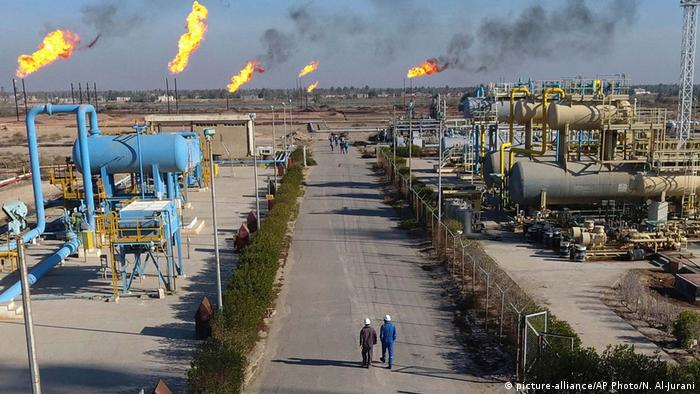 Iraq's government and German industrial conglomerate Siemens have signed a framework agreement to upgrade the electricity grid of the power-strapped country.

Siemens chief executive Joe Kaeser and Iraqi Electricity Minister Luay al-Khatteeb "signed an implementation agreement to kick off the actual execution of the roadmap" agreed to last year, the company said in a statement.

"This includes the addition of new and highly-efficient power generation capacity, rehabilitation and upgrade of existing plants and the expansion of transmission and distribution networks," Siemens said in a statement.

Under the first phase of the agreement, the two sides agreed to contracts worth €700 million ($785 million) for the construction of a 500 megawatt gas-fired power plant, the upgrade of 40 gas turbines and the installation of 13 substations and 34 transformers across Iraq.

The announcement came as Iraqi Prime Minister Adel Abdel-Mahdi and German Chancellor Angela Merkel were meeting in Berlin on Tuesday.

Abdel-Mahdi said Iraq planned to make around $14 billion in orders to upgrade electricity infrastructure, which has fallen into poor condition due to war, corruption and mismanagement.

Speaking after their meeting, Abdel-Mahdi gave his assessment of the strength of the IS group, whose leader issued a video statement this week. "IS has not completely disappeared but suffered painful blows," he said, adding that Abu Bakr al-Baghdadi appeared to be isolated, in an unknown location.

Merkel said the video was a sign that "we will remain occupied for some time to come with the question of how IS can finally be defeated."

Siemens is already active in Iraq and has a good chance of being awarded "a large part of these projects," he said.

US multinational General Electric is also competing for projects.

"Our claim is that we are a reliable and affordable power supplier to the people of Iraq and want to help them rebuild their country," said Kaeser.

Siemens may also help with financing the projects, which would create tens of thousands of jobs and lead to billions of dollars in fuel savings and revenue generation, the company said.

Siemens intends to increase electricity production in Iraq by around 50% through the building of new power plants, upgrading existing ones and modernizing the inefficient electricity grid.

Iraq suffers from major electricity shortages despite sitting on some of the world's largest oil and gas fields. Much of the country's gas is wasted through gas flares.

Summer electricity and water shortages in the oil-rich but impoverished south of the country have triggered near-yearly protests against the government.

Iraqi Prime Minister Haidir al-Abadi has sacked his electricity minister. Protesters had demanded his departure after weeks of demonstrations against corruption, poor services and power shortages. (29.07.2018)

Iraq is a wonderland for used car parts from the West. Cars that get written off after an accident get a second life there. It's a money machine, involving billions every year. Judit Neurink reports from Irbil. (21.04.2019)