As Baghdad is rocked by deadly explosions and political chaos, "drifting" is an increasingly popular way for young men in the Iraqi capital to let off steam, reports Florian Neuhof. 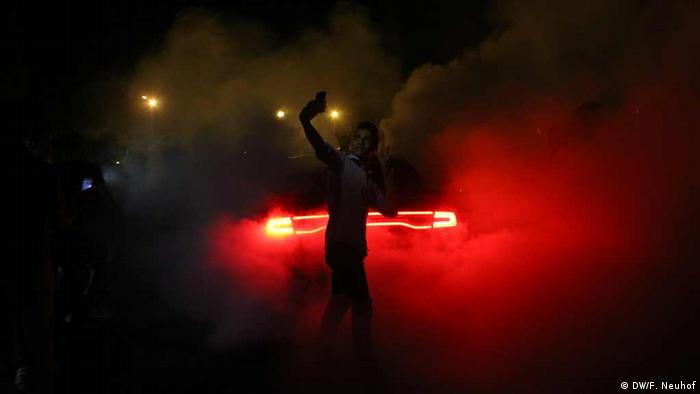 On a Friday night, the roar of engines carries across the Tigris as it bends around the sprawling campus of Baghdad University.

Souped-up race cars slowly position themselves around an unlit patch of tarmac in a leafy part of the campus, engines roaring and tires screeching as the drivers vie for the attention of the crowd.

Young men gather at their parked cars, smoking shisha pipes and chatting as they wait for the action to begin. A group of friends have placed a cake adorned with a BMW logo on a car hood, and take snaps on their mobiles as the birthday boy blows out the candles.

Several hundred have shown up to Baghdad's weekly drifting event to cheer drivers sliding their cars across the tarmac, creating thick clouds of smoke as they burn through their tires. The numbers are growing, organizers say.

The laddish pastime allows Iraqis to forget about the dismal realities of a city marked by bombings, protests and economic hardship. 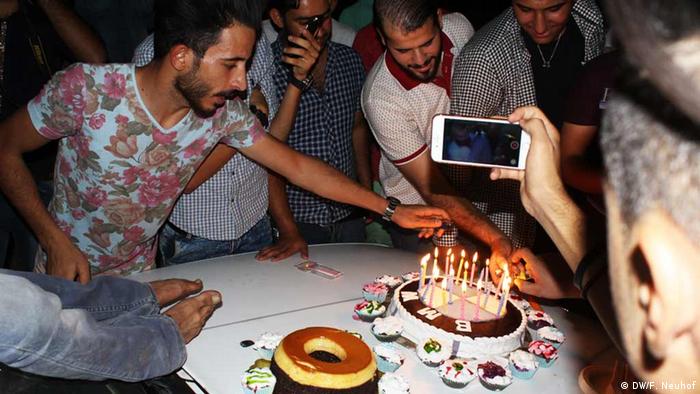 Once the flow of arrivals as ebbed, Theer Fedawi steps into the enclosure that has been haphazardly cordoned off with rope and beckons the first driver into the makeshift arena.

A battered old sports car duly rolls in, and the driver begins to rev his engine and turn his vehicle in tight circles around Fedawi. The headlights pierce a mix of dust, exhaust fumes and pulverized tire and illuminate rows of cheering spectators lining the fence.

Other vehicles take their turn, sometimes alone, sometimes in pairs or bigger groups. Wheels with shredded tires are proudly displayed before disappearing in the boot of a car.

"This is how the guys here express themselves and have fun," Fedawi tells DW during a quiet moment. The 23-year old has been organizing the event in the university campus since 2013, he says.

People first started gathering to watch drifting in Baghdad in 2010, and it has grown in popularity since.

"There are not many ways to have fun in Iraq, so we have fun with the drifting," says Ali, one of the spectators. The 30-year old, who bemoans the fact that big name soccer clubs like his favorite, Real Madrid, never visit Iraq, has been part of the drifting scene since its inception. 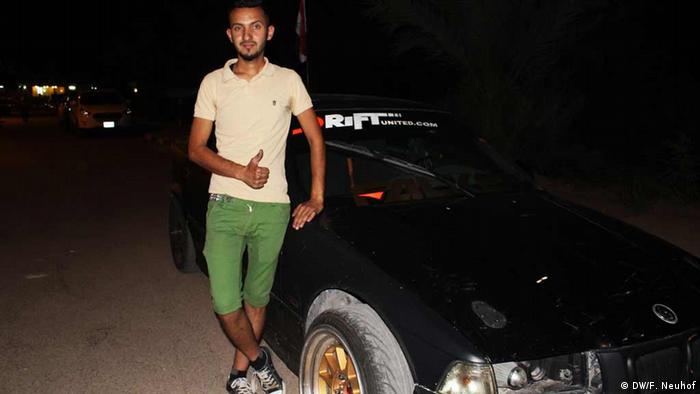 Dulaimi is one of Iraq's best drifters

"The whole week we wait for Friday so we can forget about what happens during the week, the explosions and the killings. We only have the Friday for us," says Harith Dulaimi.

Twenty-five year-old Dulaimi is one of the stars of the fledgling community, a drift driver regarded as one of Iraq's finest. The semi-professional, who also runs a spare car parts business, takes in around a $1,000 a month in prize money and sponsorships, money he invests into modifying his ageing BMW 3 Series.

Dulaimi feels that drifting is slowly gaining the recognition it deserves, helped by videos and pictures widely circulated on social media.

"Some think of it as 'kids shredding tires.' But once the videos came out and things became more professional, people began realizing that it was a sport," he says.

A little later, Dulaimi steers his black BMW into the enclosure and spins a few rounds to wave at the adoring crowd. A few daring fans slip through the fence and sit on the tarmac to act as human traffic cones. Others enter to take pictures from close up with expensive-looking cameras.

Dulaimi weaves past the seated men, the front wheels almost touching them as the rear of the car rotates around them, thick smoke rising from the burning tires.

'A different way of protesting'

The show ends with a parade of expensive US sports cars which noisily circle before lining up to shred their wheels and backfire their engines. Men now flood into the enclosure to snap selfies and take videos to the backdrop of white smoke and wailing motors.

Afterwards, the crowd begins to thin and cars file out of the university campus, leaving behind the smell of burned rubber. They drive back into a city where bombings claim lives almost daily, and where the combination of political chaos and a failing economy is fomenting civil unrest. 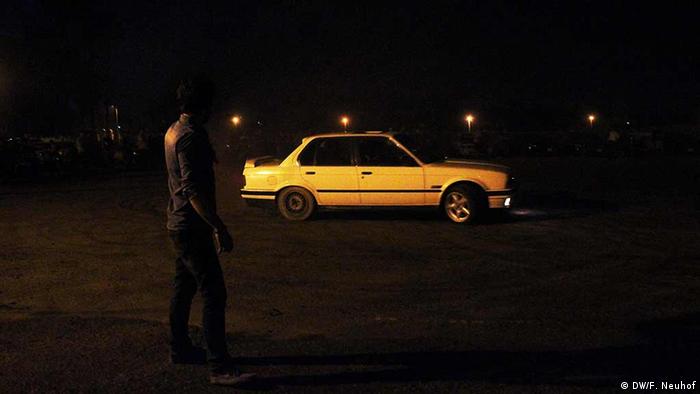 Some call drifting child's play, others a sport

Two years of war against the "Islamic State" have thrown Iraq and its capital into deep crisis. The terror group responded to an Iraqi army offensive on the IS-held city of Fallujah with a surge in bombings in Baghdad. On July 3, shortly after IS had been vanquished in Fallujah, its bombing campaign culminated in a horrific attack on civilians in the district of Karada. The death toll from the huge explosion has reached nearly 300.

The drifting enthusiasts never know if they will be back the following week. They could fall victim to the next terrorist bomb. Or they could be otherwise engaged. In recent months, regular Friday demonstrations have been held in front of Baghdad's Green Zone as people protest against government corruption and incompetence. When the protesters gather, the city goes into lockdown, and most of the drifters join in.

If there are no demonstrations, they will congregate at the campus again and leave behind their problems for a few hours.

"We have our own way of protesting," says Dulaimi.

Terror in Baghdad: 'They just want to spread fear'

Many Iraqis are in shock after a massive 'Islamic State' (IS) bomb attack in Baghdad on Sunday. DW journalist Abbas al-Kashali discusses what is driving the spiraling violence and possible approaches to countering it. (05.07.2016)

The "Islamic State" group has stepped up its suicide-bombing campaign on Baghdad. For many Iraqis it's become a common occurrence - but young people are trying to get on with their lives as Judit Neurink found out. (23.05.2016)