Iraq's parliament votes to give legal status to Shiite militias

Iraq's parliament has voted to fully legalize state-approved Shiite militia once accused of abuses against the country's Sunni minority. The move was rejected by Sunni lawmakers, who fear the status will be misused. 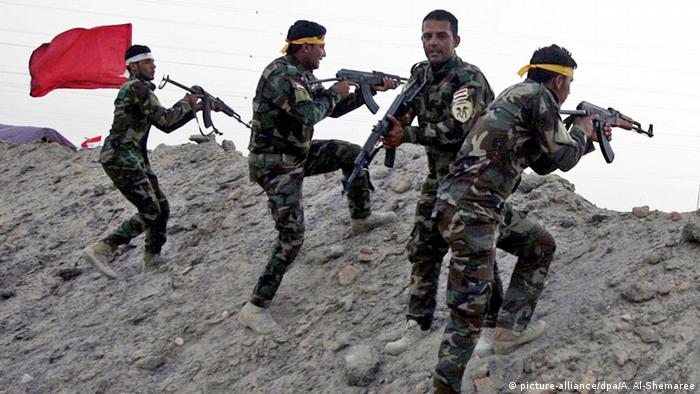 The Iraqi legislature has passed a law granting legal status to the militias, who have been a key force in fighting the "Islamic State" (IS) militant group.

The law was passed in a session boycotted by many Sunni parliamentarians. It guarantees militias from the Popular Mobilization Forces the right to keep their "identity and character as long as that does not threaten Iraqi national security."

The motion was passed by 208 of the chamber's 327 members, but the move was criticized by Sunni representatives.

"What was decided today damages ... the balance between the state's bodies, creates new bodies parallel to those of the state and weakens the Iraqi state," said Osama al-Nujaifi, one of Iraq's three vice presidents.

The militias, the most powerful of which are close to neighboring Iran - are given status in the new law as "an auxiliary and supporting force for the Iraqi security forces." That would entail carrying out security and military functions at the behest of the prime minister.

Popular Mobilization spokesman Ahmed al-Asadi thanked lawmakers for their support and sought to reassure opponents of the legislation.

"We will seek to dispel the fears of those who opposed the law," al-Asadi said.

The bill had the backing of Prime Minister Haider al-Abadi, who congratulated the militia groups.

The Popular Mobilization Forces were formed in mid-2014 when Shiite religious leader Ayatollah Ali al-Sistani called for volunteers to fight the "Islamic State," after it overran northern Iraq and threatened majority Shiite areas.

The forces are currently involved in the battle for Mosul, teaming up with Kurdish peshmerga fighters from the north and east.

Sunni Arabs, as well as rights groups, have long complained that the militia members have been involved in extrajudicial killings, abuse and the theft or destruction of property in Sunni districts. They also view the groups with distrust because of links with non-Arab, Shiite Iran, including a reliance on military advisers from that country.

Women from Mosul relieved after liberation

Haider al-Abadi: 'I cannot turn the country upside down in one day'

Iraqi Prime Minister Haider al-Abadi says Iraq is ready to retake the city of Mosul from "Islamic State" militants. He wants to fight terrorism, corruption and the Sunni-Shiite rift. But can he deliver on this promise? (17.02.2016)

Since last October's elections, Iraq has been without a government because politicians can't manage to form a coalition. That's not uncommon in democracies. But is it positive for Iraq, or will it become dangerous?

Two day's ahead of Iraq's Sunday vote, certain groups have already been called to cast their ballot. A low turnout is expected as anti-government activists call for a boycott.