Why the Bavarian election matters for Angela Merkel | Germany | News and in-depth reporting from Berlin and beyond | DW | 13.10.2018

Why the Bavarian election matters for Angela Merkel

Much is at stake for Angela Merkel in Bavaria's state election. A poor result for her conservative allies could lead to more government instability. But the election also signals bigger changes in German politics.

Whatever happens in Bavaria's election on Sunday, it promises to be a bellwether for German, or even European, politics for years to come.

At one level, the regional election will act as the next Angela Merkel litmus test, a series that has been going on for several years and is supposed to illustrate the relentless decline of the chancellor's popularity. This election happens to be the station between the loss of her chief whip in the Bundestag last month, another regional election in Hesse later this month, and her planned re-election as Christian Democratic Union (CDU) leader in December.

Though, of course, the immediate impact of Bavaria on Merkel's standing will be limited. Thanks to a quirk in the conservative section of Germany's political spectrum, the chancellor is not part of the Christian Social Union (CSU) which governs the affluent southern state, even though her CDU has been allied to the Bavarian conservatives since their foundation. Not only that, but she was summarily excluded from the CSU's election campaign, which will make it hard for her enemies to blame her if there's a disastrous result for the CSU.

But the CSU's exclusion of Merkel was not surprising, given that the party's two leading figures, Interior Minister and party leader Horst Seehofer and Bavarian State Premier Markus Söder, have both positioned themselves as Merkel-skeptics inside the governing coalition. The CSU's election strategy has been to shore up its right flank with populist anti-immigrant rhetoric in an attempt to halt the rise of the far-right Alternative for Germany (AfD). This has arguably been a modest success: The AfD is currently polling at around 10 percent in Bavaria — below its national average of 15 percent.

But playing regressive populists doesn't seem to have helped the CSU much in general. The party has been steadily sinking in the polls since the election campaign began. A Friday poll by public broadcaster ZDF put them at 34 percent, 2 points below September, 5 points below August, and a whole world away from the 48 percent they reached in the 2013 state election.

Such a result would create national ructions whose outcome would depend on coalition negotiations, but may actually help Merkel in the short term. The CSU's failure could lead to Seehofer's resignation from Merkel's government, and conceivably Söder's exit from the Bavarian state premiership, which would remove two of the chancellor's most outspoken critics from power, and give her room to govern in the calmer, crisis-free manner she is accustomed to.

On the other hand, a heavy loss and big resignations in the CSU might well push a desperate party in a more volatile, abrasive direction at the national level. That would further antagonize the SPD, the center-left junior partners in Merkel's coalition, themselves desperate for a new direction and already impatient with Seehofer's destabilizing antics, and precipitate a break-up of the age-old CDU/CSU alliance, and therefore a break-up of Merkel's grand coalition. In short: Anything could happen after Sunday, up to and including Merkel's fall. 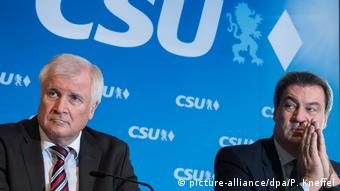 Read more: In Bavaria AfD and CSU bring voters to a crossroad

The demise of German centrism

The CSU's dominance in Bavaria was in the innocent days before the AfD had left an inerasable mark on Germany, and a shift in the whole political debate that has created a seemingly irreversible flattening out and broadening of the political landscape.

The untranslatable term "Volksparteien" (literally, "people's parties"), referring to the two big central parties, the CDU/CSU and SPD, once meant that the two parties enjoyed an appeal across various social classes, and reflected their status as the keepers of German stability.

But the latest opinion polls suggest the word is obsolete now, and its relevance has been crumbling for a while. In fact, you'd have to go back to Merkel's first election victory in 2005, when the CDU claimed 35 percent of the vote, and the SPD 34 percent, for the last time that the two major parties could still claim to represent a clear majority of the German population.

Stammtisch: Bavaria state election - The times they are a-changing

Nowhere is the decline of the Volksparteien more obvious than Bavaria, possibly the state that most embodies German power and tradition for international Germanophiles: This is the state of auto giants like BMW, of European football titans Bayern Munich, of splendors like King Ludwig's Wagner-inspired fairytale castle Neuschwanstein.

Since the end of WWII, it's been unthinkable that the CSU would fail to get an absolute majority in Bavaria. Though there have been dips in the party's state election results before (2008's 43 percent was a mighty shock after 2003's 60 percent), Sunday's fall could be a decisive shift.

Current polling suggests that only two parties are winning new voters in Bavaria — the Greens and the AfD. One AfD spokesman told DW this week that in five years' time, German politics could be suspended between two tent-poles: his far-right party at one end, and the liberal environmentalists at the other, each with around 25 percent of the nation's support, looking down on a clutch of three centrist parties (the CDU/CSU, the SPD, and the business-friendly Free Democrats) all hovering at between 10-15 percent in the middle. Meanwhile, the socialist Left party would end up hovering paralyzed and irrelevant beyond the Greens at the far-left, the AfD spokesman predicted.

That speculation, which is reflected in this week's Bavarian opinion polls, chimes with the new political frontlines that have developed across Europe, and arguably in the US, in the last couple of years: the confrontation between progressive identity politics that demands equality and inclusion for previously marginalized social groups, and regressive identity politics that is trying to protect the privilege of the old white Christian order. Sunday's election could be the moment when this new constellation finally becomes visible in parliament.

A combined low of 41 percent has emerged in a survey for Chancellor Angela Merkel's government. Her conservatives and coalition Social Democrats polled 26 and 15 percent respectively. Up to second place are the Greens. (11.10.2018)