In Bavaria AfD and CSU bring voters to an election crossroad | Germany | News and in-depth reporting from Berlin and beyond | DW | 12.10.2018

In Bavaria AfD and CSU bring voters to an election crossroad

As the polls open in Bavaria, voters are caught between tradition and change. For some the vote is a referendum on Angela Merkel's government, but for others it's a chance to protest the CSU. 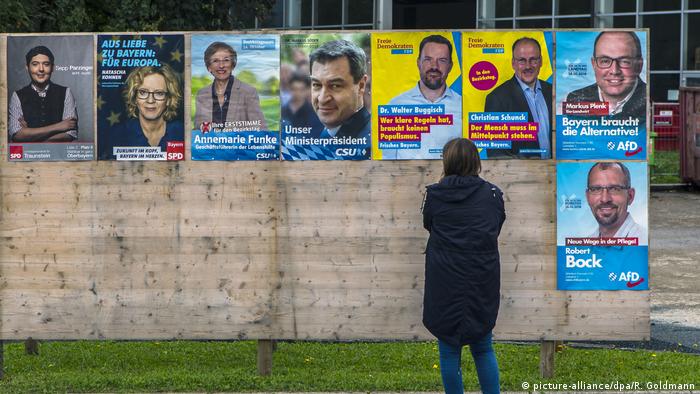 A small statue of Jesus hangs suspended between two antlers on the wall of a tavern outside the Bavarian town of Deggendorf. Below the rustic crucifix, supporters of the far-right Alternative for Germany (AfD) pass around a donation box plastered with anti-Angela Merkel stickers.

"The AfD is God's punishment for the CSU," says Katrin Ebner-Steiner, the AfD candidate for Deggendorf, to wild applause from the crowd.

The Christian Social Union (CSU), the Bavarian "sister party" to Chancellor Merkel's CDU, are fighting to keep conservative voters from switching to the right-wing populists, who have found a stronghold of support in Deggendorf. In the 2017 federal elections, the AfD won 18 percent of the town's support, compared to a Bavaria-wide result of 12.4 percent.

CSU: 'Part of the problem'

Unlike other AfD campaign events, there are no protesters outside the tavern — a fact cheerfully pointed out by the night's main speaker, Alice Weidel, the AfD's parliamentary party leader.

"The impact of the Bavarian state election is immense," Weidel tells the audience. "The harsher the lesson for the CSU and the stronger the presence of the AfD in Bavaria's state parliament, the faster the chancellorship of Angela Merkel will come to an end."

Like others in the tavern, Harald Fischer tells DW that he used to support the CSU but was deeply disappointed with the German government's response under Merkel to the mass arrival of refugees and asylum-seekers in 2015. He believes the CSU is also to blame.

"They're part of the problem, not the solution. And they'll have to face the consequences," he says. 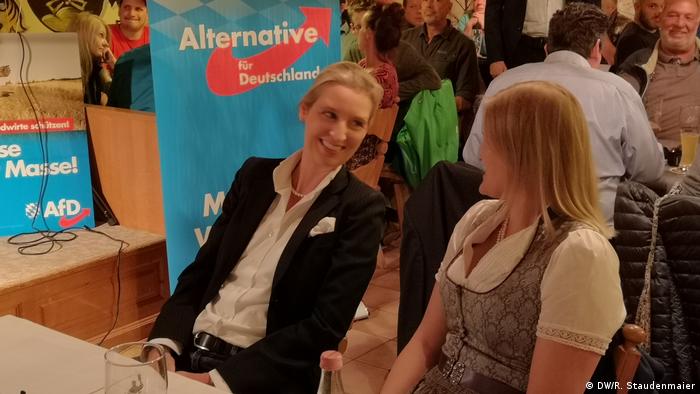 It's not just the AfD that are treating Bavaria's state election on October 14 as a referendum on support for Merkel's government. The CSU has also criticized Berlin politics to try and drum up support for the party as it faces  losing its historic absolute majority in the regional parliament. It is a fine line for the Bavarian party to tread, given that the CSU currently cogoverns the federal government with Merkel's conservatives and the junior Social Democrats (SPD).

A few days after the AfD campaign rally, the CSU held its own election event in Deggendorf.

The crowd of mostly older participants, some dressed in lederhosen and traditional dresses, munched on free pretzels and sipped local Bavarian beers as they waited for the Bavarian state premier, the CSU's Markus Söder, to arrive.

For CSU supporters, tradition is everything, and their voting patterns reflect this. When asked why they support the party, the most frequent answer is that they vote for the CSU because they've always voted for the CSU.

Yet the existence of widespread reservations among the party's typically stalwart supporters is clearly reflected in the CSU's current bleak polling figures.

"Politicians have to make more exact decisions. They're only thinking about federal politics," an 82-year-old CSU supporter told DW. He voiced frustration that the debate over migration policy has detracted from other issues, like improving education and pensions.

Although generally well-liked amongst CSU voters, Söder has seen his fair share of controversy in the few months he's served as premier, particularly for attempting to pander to the far right with hardline immigration policies, as well as for decreeing that crosses should be hung in state buildings. His recent announcement about founding a Bavarian space program raised eyebrows as well. 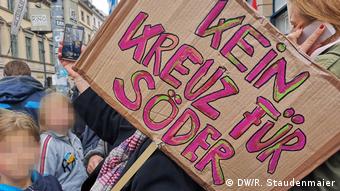 Bavarians protested Söder's push to afix crucifixes to the walls of public buildings with a sign reading, "No cross for Söder" — a play on words also indicating that the premier would not receive their check on the ballot

In contrast to earlier speeches, Söder appeared more toned down on the topic of migration at the rally in Deggendorf, making sure to emphasize the CSU's desire to keep Bavaria open.

"What is our mission? To remain globally open while not losing our goals or culture," Söder told the crowd. "We want to be modern, but remain Bavarian.

His comments contrast not only with the rhetoric of populist parties, but also with the CSU's own aggressive rhetoric over the past months.

Yet Söder's shift in tone may be too little, too late for younger voters in Bavaria, particularly in big cities like Munich.

Various protests against the CSU haven taken place in the Bavarian capital in the lead-up to the October vote. Most recently, on Germany Unity Day, thousands of people marched through the streets of Munich carrying banners lambasting the AfD and the CSU in equal measure. 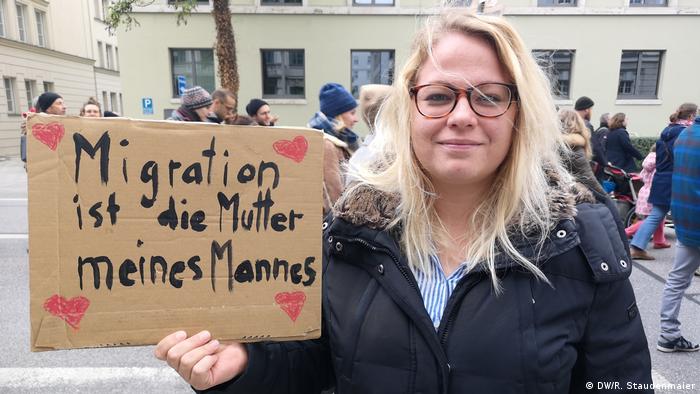 Wiedemann marched in Munich with a message for Horst Seehofer: "Migration is the mother of my husband"

Wiedemann told DW that the rise of sentiment against immigrants and refugees has negatively impacted her life with her husband, who fled Iran and has been studying and living in Germany.

Her message to Seehofer was: "I want him to see that migration is a chance, not a threat."

Others also took aim at Seehofer, whose refusal to budge on his hardline migration policy, with much of it focused on Bavaria's borders, nearly toppled Merkel's government this summer.

"I think Seehofer is the most dangerous politician of his time," said Benjamin Glauss, a 33-year-old SPD supporter living in Munich. He added that he believed Seehofer was even more dangerous than far-right politicians, since his remarks carry more weight with voters.

"He's from an established party, and people are still heavily influenced by his words," Glauss said.

Many hopes for left-leaning voters rest with the environmentally-friendly Greens, who are currently polling second in Bavaria at 18 percent. Such a result in the October 14th polls would be an electoral first for the state.

"It's important to show that there's people who are against xenophobia and far-right rhetoric," a 20-year-old woman told DW. She was supporting the Greens, and left-leaning parties generally. "I want something new," she said.

Bavarian State Premier Markus Söder has launched a war of words with Germany's far-right AfD. Bavaria's Christian Social Union is vying to win back voters ahead of October's state election. (12.05.2018)