Bavaria's decree about hanging crosses in public buildings has gone into effect. The rule, as well as the motives behind it, has left people and local authorities in the southern German state scratching their heads. 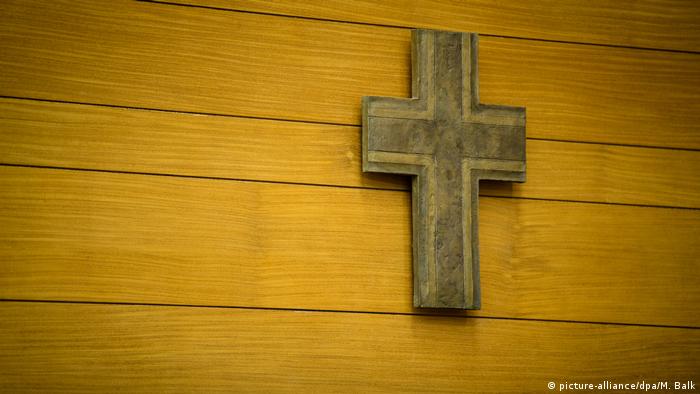 Starting on Friday, nearly all state authorities in Bavaria are required to have a cross hanging in their foyers — meaning that anyone turning in their taxes, reporting something to a police station, or entering an administrative court will be greeted by a cross in the southern German state.

"From then on, the obligation goes into effect — and we mean it absolutely seriously," Martin Scholtysik, a spokesman for the Bavarian state interior ministry told DW.

The spokesman did not elaborate on whether or not there would be penalties for authorities that refuse to hang up the crosses, but he did note that the ministry is expecting some pushback. 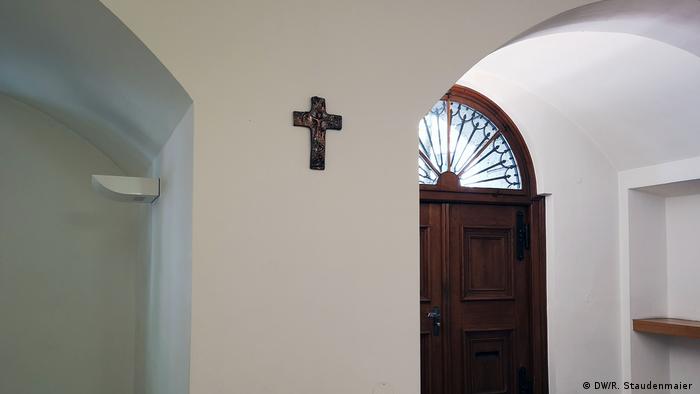 A metal crucifix hangs in the waiting room of Bavaria's Ministry for Education, Science and Art in Munich

The newly amended requirements for state buildings now reads: "A clearly visible cross must be placed in the entrance area of every service building to serve as a reminder of the historical and cultural influence of Bavaria."

Bavarian state premier Markus Söder unveiled the new regulation at the end of April — adding a dramatic touch to his announcement by hanging a cross in Bavaria's state chancellery, surrounded by the photographers' flashing lights.

The announcement sparked a heated debate in Germany and drew criticism from students as well from the heads of the Protestant church as well as the Catholic German Bishop's Conference, who warned the state government about misappropriating the cross.

Read more: Niebler: What's wrong with a cross on the wall?

Söder — one of Bavaria's few Protestant state premiers — won't be around to see the new cross rule go into effect. He'll be spending the day in Rome meeting with Pope Francis. 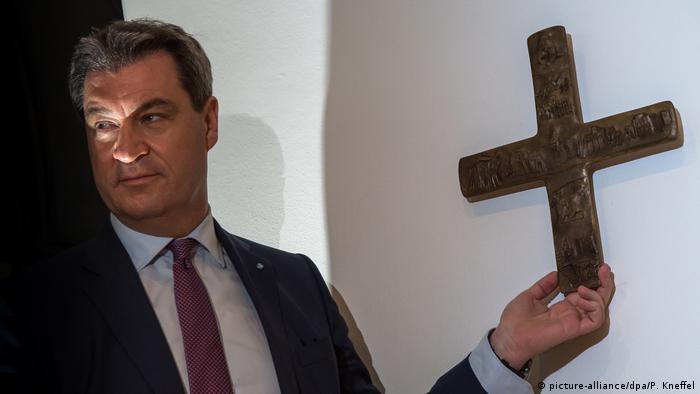 After starting with a bang, it appears that many of Bavaria's local authorities are hoping to let June 1 come and go as quietly as possible.

Some of the muted reaction likely stems from the lingering confusion around the new rule. The state Interior Ministry spokesman defended the lack of concrete instructions about cross size and placement for authorities, saying each local office should be free to decide for themselves.

This also technically means the crosses could be very small — as long as they're in the foyer and are visible.

The massive Bavarian State Library in Munich took a minimalist approach to following through on the new rule. Their slim, silver-colored cross hangs on a wall back behind the circulation desk.

Library spokesman Peter Schnitzlein defended the cross' placement — which is a good walk from the library's main entrance —  saying that many people still pass through the area. 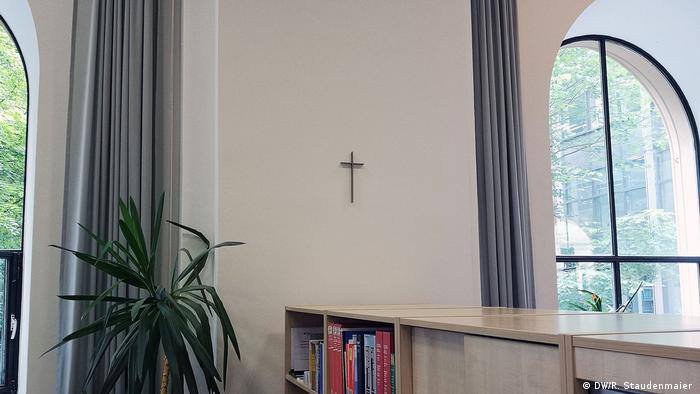 The term "service building," or "Dienstgebäude" in German, has also been problematic. It's a broad term that basically covers all buildings that house authorities and administrative offices that are under the control of the Bavarian state government.

Currently there aren't any crosses hanging at the headquarters or in the police stations in Munich, because they're still being made.

"We're still in the procurement process for the crosses," a Munich police spokeswoman told DW.

Since they're ordering them from workshops staffed by people with disabilities, they're still trying to determine whether they have the capacity to create the 50 crosses needed for the police headquarters and all the police stations in Munich.

Art museums and other cultural institutions that fall under this category in Bavaria have been particularly resistant to hanging crosses in their entrance halls, saying it violates the mission of their work.

Following confusion about exactly which public buildings were required to adhere to the new rule, the Bavarian state government scaled back the requirements.

"The obligation to hang crosses in entrance areas applies to all authorities within the Art and Science Ministry. There is an exception for theaters, museums, universities and other higher learning institutes. They are recommended to do so," Mira Barthelmann, a spokeswoman with Bavaria's Ministry for Art and Science told DW.

Eva Krauss, the director of the Neue Museum for contemporary art in Nuremberg, was one of the first to say she would not be hanging a cross in her museum in comments reported by German newspaper, the Süddeutsche Zeitung.

A spokeswoman with the Neue Museum told DW that just a few days after Krauss' comments were made public, they indirectly found out that the rule may not apply to them. 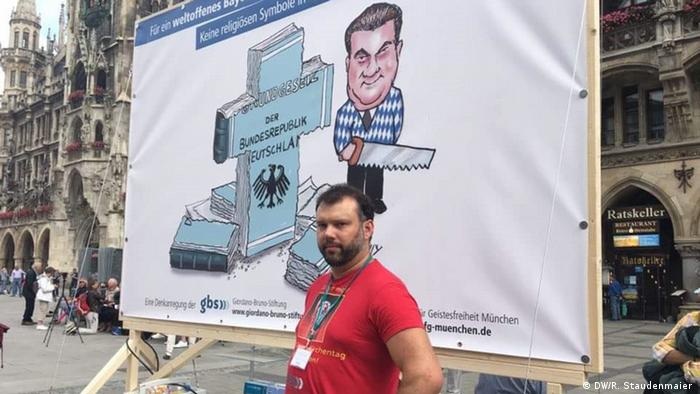 "We clearly believe this is unconstitutional," Farago, the organizer of an artistic protest in Munich, told DW

Some have questioned the constitutionality of the new cross requirement, since it could violate constitutional rules about religious neutrality and the separation of church and state.

David Farago, a member of the humanist Giordano Bruno Foundation, organized an artistic protest against the new rule in Munich — including a large caricature of Söder carving a cross out the German constitution.

Söder and the Bavarian government have skirted this issue by claiming the cross is a symbol of "Bavarian identity."

By stoking divisions about what constitutes Bavarian identity — particularly in the midst of an ongoing debate about the role of Islam in German society, Söder and his party have been accused of using populist strategies to ramp up support ahead of state electionsthis fall.

Söder's Christian Social Union (CSU), the Bavarian sister-party to German Chancellor Angela Merkel's Christian Democrats, is looking to defend its seats from the far-right Alternative for Germany (AfD) in state elections on October 14.