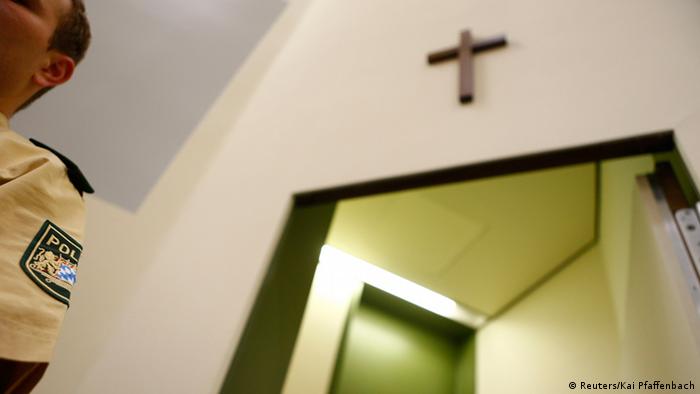 A storm has been raging in Bavaria, with no signs of letting up. Bavaria's premier, Markus Söder, who has barely been in office for two months, wants to have a cross visibly – indeed ostentatiously – displayed in the entrance area of every public office across the state. It will be obligatory as of June 1.

Söder believes the cross is the fundamental symbol of cultural identity. No. The cross is more; it is something completely different. The cross is a mark of shame and a symbol of hope, of new life emerging through death. In the Roman Empire, execution by hanging on the cross was an expression of particular cruelty and contempt. And according to Christian beliefs, new life in God could grow through Jesus Christ's suffering on the cross. Furthermore, Christians have a special responsibility to stand by those who are suffering or facing despair.

I myself am a Catholic. I studied in Jerusalem, celebrated Easter there several times and experienced firsthand the fervor of prayer from around the world. And there are crosses that are personally important to me. When I am traveling, I am glad when I see wayside crosses or church steeples with a cross.

I think it is right that a cross (which weighs a ton) hangs in the parliamentary group hall of Angela Merkel's Christian Democratic Union (CDU) and its Bavarian sister party, the Christian Social Union (CSU), in the Bundestag – Germany's lower house of parliament. But it belongs there and not in the entrance. And at every CSU party conference, a cross hangs in a corner of the convention hall – justifiably so.

Read also: 6 facts about Catholic and Protestant influence in Germany

The Bavarian premier's logic, however, is simply appalling. It is presumptuous. A politician has declared the symbol of the cross to be a sign of identity and demarcation. Söder, who has been a member of the state synod of the Bavarian Protestant Church for many years, knows what he is doing. In October, state elections will be held in Bavaria, and he is adopting a platform based on maintaining Bavarian culture. And he is prepared to debase the cross for this political show. If lawyers now are saying that the Bavarian state cabinet's decision is likely to end up before the Constitutional Court, Söder can stay cool. By then, the state elections will be long over.

Read also: The eternal dispute between politics and religion

The German daily Frankfurter Allgemeine Zeitung recently published a full-page text written by Horst Seehofer, who was Söder's predecessor as Bavarian premier and currently serves as German interior minister. The theme was the German concept of "Heimat," which roughly translates to "homeland." It was a thoughtful text about cultural identities, religious influences and traditions, about the difficulties of integration. The word "cross" did not appear in the article. On the other hand, the concept of shared common values was referred to often.

Two statements in recent days by CSU Secretary General Markus Blume have particularly vexed me. Blume has been in office for six weeks, but over the past few years has carefully worked out the CSU's new program. And now?

"There hasn't been a single harsh word from supporters of multiculturalism against the recent [resurgence of] anti-Semitism, but they have reacted vehemently to the idea of having Christian symbols in everyday life," he claims. He accused those opposing the plans to install crosses as "an unholy alliance of religious enemies and self-deniers." He further charged that criticism of the plan was an effrontery to theologians and dedicated lay people.

It would seem that suddenly a ruling party knows exactly what is sacred or unholy, and who is or is not an enemy of religion. Hello, Hungary. Hello, Poland.

Read a different take on the debate: Bavaria's cross decision is no big deal

Turkey, Hungary and Poland: The politics of school textbooks

School curricula in Turkey and EU states Hungary and Poland have been trending more toward patriotism and religion, with less emphasis on diversity. Teachers and other education experts are voicing their criticism. (19.10.2017)

German COVID rate soars to highest level since May 0m ago

Opinion: No far-right publishers at the Frankfurt Book Fair, please! 23h ago