Bavaria's state premier, Markus Söder, has ordered that crosses be hung up in all state buildings in the southern German state. He called the move an "avowal of Bavarian identity." 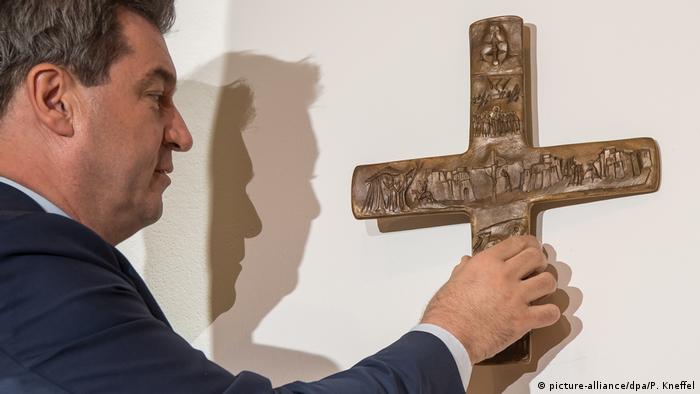 Bavaria's freshly sworn-in state premier has stamped a Christian identity on the state's public buildings as one of his first acts in office.

Markus Söder, of the Christian Social Union (CSU), conservative sister party to Angela Merkel's Christian Democratic Union (CDU), on Tuesday announced that a cross would be hung in every public building starting June 1.

Söder, who took over the Bavarian government from CSU leader and political rival Horst Seehofer in March, took to social media to call the move a "clear avowal of our Bavarian identity and Christian values," before adding that, after the cabinet meeting, he had immediately gone out to hang a cross in the lobby of the state chancellery in Munich.

Söder went on to claim that the directive was not a violation of constitutional rules about religious neutrality because it was a symbol of "Bavarian identity" rather than religion. Bavaria remains a majority Christian state and one of the most Catholic regions in the country. In 2016, 50.5 percent of the population were categorized as Roman Catholic and another 18.8 percent as Protestant.

Söder's directive applies only to buildings housing agencies of the state of Bavaria — not to local district buildings or federal buildings, over which his government has no authority — though it does apply to all school classrooms and courts.

The move quickly attracted online ridicule (with Twitter users photoshopping other objects into Söder's hands), as well as outrage from Germany's political opposition, who saw the move as a cheap attempt to head off the right-wing populist vote before Bavaria's state election later this year.

"Why can the CSU never think of anything that brings people together, instead of trying to divide the country at every level?" wondered Jan Korte, leader of the Left party's parliamentary group in the federal parliament. "Söder's unconstitutional crucifix decree is not just the clumsiest election campaigning, but also exploitation of religion for personal reasons."

Christian Lindner, head of the business-friendly Free Democratic Party (FDP), also tweeted his disapproval, saying, "The way Markus Söder and the CSU constantly exploit religions for their party politics, reminds one of (Turkish President Recep) Erdogan. The constitution has no religion!" 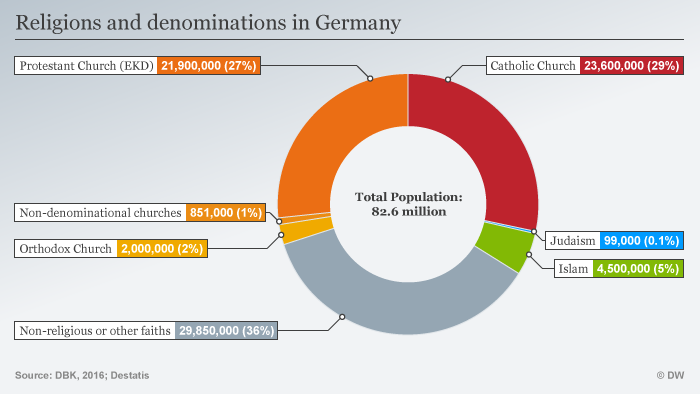 Or diminishing the cross?

Meanwhile, legal experts have been arguing in the media about whether the Bavarian government's decree constitutes a violation of German neutrality laws. Thomas Schüller, Catholic theologian at Münster University, called the decision "borderline, because ... the state is supposed to present itself as neutral in its worldview."

Schüller also said Söder's statement equating the cross with Bavarian cultural identity and history "diminished it into a folklore symbol."

"Those who exploit the cross politically in this way don't understand even the first thing about the theology of the folly of the cross verse (1 Corinthians 1:18) — the cross as a thorn for the powerful and a sign of hope for the weak," Schüller told DW via email.

Heinrich Bedford-Strohm, council chairman at the German Protestant church federation (EKD), welcomed Söder's order — though with some caveats. Those who hang up a cross must also take its message seriously, he told Bavarian public TV station BR. "This stands for human dignity, stands for charity, stands for humanity," he said. The son of God, he added, had been tortured to death on the cross. "If we take that seriously, then we stand on the side of those who are vulnerable," he said.

The director of the EKD's legal institute, Hans Michael Heinig, said the move did open legal questions, and said it "threatened a banalization" of the cross.

The right wing in southern and eastern Germany often accuses Angela Merkel of betraying conservative values — a potentially big problem for the chancellor. DW went to Ansbach in Bavaria to test the political winds. (15.03.2018)