The right wing in southern and eastern Germany often accuses Angela Merkel of betraying conservative values — a potentially big problem for the chancellor. DW went to Ansbach in Bavaria to test the political winds. 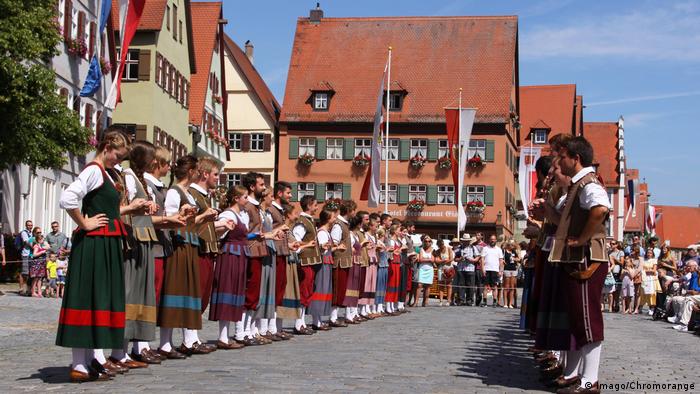 On the surface, Ansbach seems like a paradigm of old-school Bavaria. It's an affluent-looking city of 30,000 replete with Baroque architecture, beer and bratwurst taverns and even a shop selling lederhosen and dirndls. The sort of place where the conservative Christian Social Union (CSU), the Bavarian sister party of Angela Merkel's Christian Democrats (CDU), used to be the only political game in town. But not anymore.

The CSU may have polled 40 percent in last September's national election in Ansbach, but they ceded 11.8 percent support to the populist Alternative for Germany (AfD). Faced with the prospect of being outflanked on the right, Bavaria's conservative party and the incoming new state premier Markus Söder want to get these voters back. But talk to Father Hans Kern, a regional Catholic dean and a priest at Ansbach's St. Ludwig's Cathedral, and you get the feeling that may not be so easy.

Many members of his congregation are worried about the growing gap between rich and poor, he says, and church charities and the local food bank are increasingly busy. The empty stores that pockmark Ansbach's lovely old town bear him out, and as if to provide a bit of easy symbolism, the sign for the dirndl and lederhosen store is cracked, with a sizable piece missing.

"There's a lot of hidden poverty here," Kern told DW. "I've seen mothers who were poor, and now their daughters are too. Poverty is reproducing itself."

Tradition may no longer be enough

Located near Nuremberg, Ansbach is a regional seat of government with good infrastructure. So if some people are having a hard time here, it stands to reason that there is significant dissatisfaction as well elsewhere in Bavaria, Germany's largest state in terms of area and a traditional bedrock of prosperity and conservatism. Is that a problem for the new German government?

A lot of people, Kern says, have been turned off by outgoing Bavarian state premier and new German Interior Minister Horst Seehofer's perceived political jockeying and Angela Merkel's relative centrism, indeed social liberalism. In any case, gone are the days when conservatives could win absolute majorities in Bavaria without even breaking a sweat.

"Many people don't recognize anything of themselves in Mrs. Merkel or the CSU," Kern explains. "People today are more critical. They don't just vote for a party out of tradition. They're asking themselves: Can I even still vote for this party?"

Then, of course, there's the other big issue aside of economic opportunity: the influx of immigrants and particularly migrants. On this score, Ansbach is anything but a typical Bavarian small city.

Not radicalized by a terror attack

Kern says the people of Ansbach pride themselves on their cosmopolitanism, and the city took it upon itself to try and help the asylum seekers who started arriving in 2015. But on July 24, 2016, a mentally disturbed refugee whose application for asylum had been rejected detonated a backpack full of explosives near a summer music festival in the old town. No one save the suicide bomber was killed, but 15 people were injured, some seriously. Still, says Kern, the city has recovered.

"The people were most shocked by the fact that something like this could happen in a small place like Ansbach," Kern says. "But people don't talk about it anymore."

In light of such an extraordinary occurrence, it's perhaps surprising that the AfD only polled 11.8 percent here, slightly below their national average. Kern puts that down to the traditional strength of human rights groups in Ansbach and the work of the city's mayor, Carda Seidel, a political independent. In any case there were no xenophobic PEGIDA demonstrations in the city.

But the frictions caused by cultural change cannot simply be dismissed. The primary school next to Kern's office, formerly a Catholic school, now teaches pupils overwhelmingly from migrant backgrounds. And Kern tells of members of his flock who reacted dismissively to the recent baptism of several adult Iranian Catholics, saying that they were "just doing it for the residence permits."

Conservatism on the basketball court 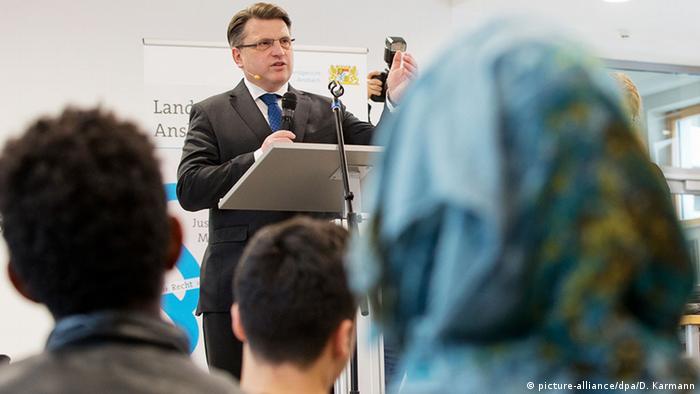 If the party is to fend off the AfD's challenge from the right, the CSU will have to assuage this sort of mistrust and worry, and the sooner the better. Bavaria is holding state elections in October. With that in mind, the CSU's youthful Ansbach regional chairman, 33-year-old Andreas Schalk, visited a high school in Nuremberg for a podium discussion with members of other parties and teenagers eligible to vote for the first time.

Schalk freely admits that the CSU was disappointed by its performance in the national election, but says that Bavarian conservatives suffered under their association with Merkel's CDU. He says the CSU can combat this "feeling of dissatisfaction" among Bavarian voters with stricter policies, including on migrants and asylum, to be pursued by Seehofer as interior minister.

"It's good if we take a hard line toward the black sheep," Schalk told DW before the event, adding that he hoped the CSU could "win back credibility."

This wasn't necessarily the most popular message between basketball hoops in a school gymnasium in front of 18-year-olds whose main concerns were being allowed to use their mobile phones in school and to smoke marijuana legally. Still, he fared much better than an AfD colleague when the talk turned, in part because of a question posed by a young woman in a headscarf, to racism.

No conservative turn will be required for the CSU to outperform the AfD among Bavaria's increasingly multicultural youth. But then again young people are the group least likely to vote, and the CSU can ill afford the declines of the last Merkel government being repeated in the present one. 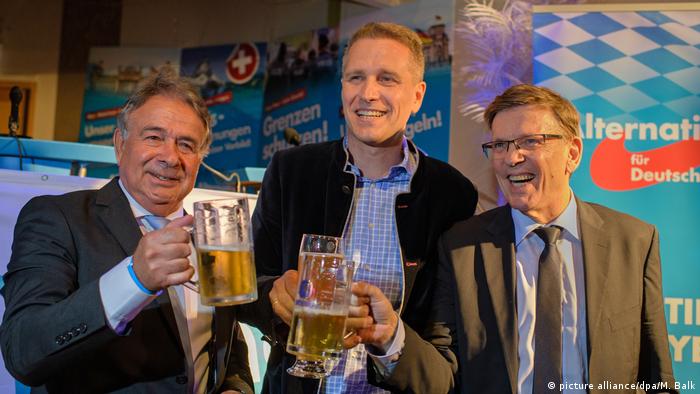 And the AfD? Do the populists worry about the CDU and CSU reclaiming their traditional right-wing turf? Fifty-three-year-old Siegfried Lang, a former CSU member and now regional AfD chairman from the Ansbach area, says there's no going back.

"How long have the CSU been in the government?" Lang told DW directly after the swearing-in of Merkel and her new cabinet, including Seehofer, on Wednesday. "And now they're again making a promise they're not going to keep. That's Merkel politics. Nothing is going to happen."

Lang, who works for the AfD parliamentary group in Berlin, is a member of the party's moderate wing, the Alternative Middle. He believes that Germany should "more carefully differentiate between war refugees and economic migrants" and "dial back the EU." But he doesn't flirt with racist language, as some in the AfD do, and he doesn't approve of some of his fellow party members' more drastic statements and actions. "Kindergarten," he says with a sigh.

"I've enjoyed a good life, and I want my grandchildren to be able to say the same," he explains.

Lang says that the majority of AfD supporters share his relatively moderate views. He'll have an opportunity to test out that hypothesis this fall when he says he intends to run for the Bavarian state parliament. That election should shed further light on the question of whether the Merkel-critical AfD has established itself as a long-term conservative competitor to the CSU — and whether the moderates or the hardliners set the tone in the party.