Ansbach attacker was meant to be deported: German interior ministry

A Berlin official has said it's unclear why the Syrian asylum seeker was still living in Germany at the time of the attack. The man allegedly blew himself up at a restaurant in the Bavarian city of Ansbach. 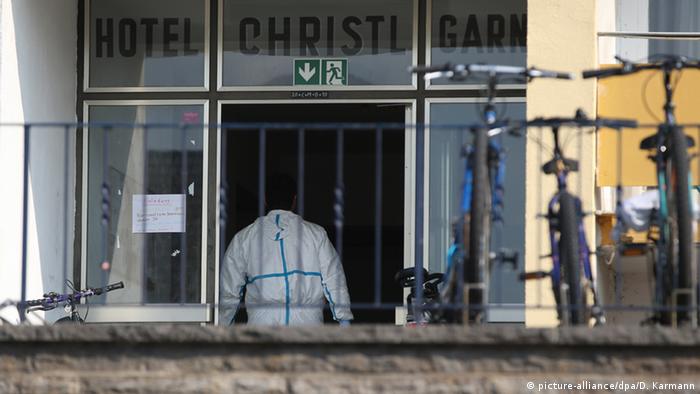 A spokesman for Germany's interior ministry said on Monday that the alleged attacker, a refugee from Syria, was slated to be deported to Bulgaria.

"I can't say at this moment why the deportation didn't take place," Tobias Plate said.

Refugees cannot be deported directly to Syria because of the dangerous conditions there, Plate explained.

The 27-year-old suspect arrived in Germany two years ago seeking asylum. His application was rejected, but he was allowed to stay in Germany temporarily. The man was living in an apartment in Ansbach at the time of the attack. He had also reportedly attempted suicide previously and had received psychiatric care.

Visiting Ansbach, Deutsche Welle reporter Nina Niebergall was told by residents of a hostel for refugees that police had searched it, looking for explosives.

Also on Monday, German newspaper Neue Osnabrücker Zeitung reported that there have been 410 indications of possible terrorists among asylum seekers, according to the country's security apparatus.

Ansbach police said the suspect blew himself up with an explosive device outside a wine bar during an open-air festival on Sunday night. Twelve people were injured and one person - the alleged attacker - was killed. The man had been barred from entering the festival because he didn't have a ticket.

The neighborhood where the explosion occurred was evacuated and cordoned off by police. Some 200 police officers and 350 rescue personnel were brought in to help with the situation.

The incident occurred during a particularly violent week for Germany, which also saw a 21-year-old Syrian refugee murder a woman with a knife in the city of Reutlingen on the same day.

Germany has been under considerable strain over the past year as it seeks to quell the number of asylum seekers entering its borders from war-torn countries in the Middle East and Central Asia, among other places. Growing anxiety about refugees has fueled the rise of right-wing populist group Alternative for Germany (AfD), whose most famous figure, Frauke Petry, pointed the blame at Chancellor Angela Merkel's policies for the recent violence.

Interview with housemate of Ansbach Attacker

After a primary psychological evaluation, the man suspected of shooting dead two elderly strangers in Ansbach appears to have a serious mental disorder. A prosecutor has said he suffers from "delusions." (11.07.2015)

German police say they have captured a shooter in Ansbach, Bavaria, after he killed two people. He had tried to flee in a silver Mercedes. (10.07.2015)