As Angela Merkel embarks on fourth term as chancellor, what′s new? | Germany| News and in-depth reporting from Berlin and beyond | DW | 12.03.2018

Angela Merkel faces the awkward task of persuading Germans she has something new to offer during her fourth term as chancellor. So can a 12-year veteran still change her leadership style? 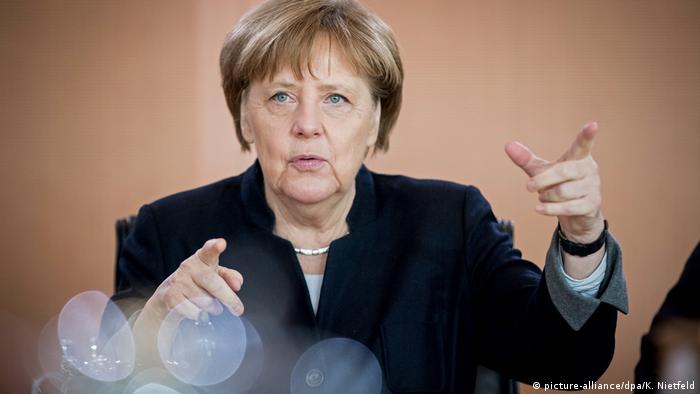 "We have a lot of work ahead of us," Angela Merkel declared on Monday. She was facing the press in Berlin to present the new German coalition contract alongside her coalition partner leaders, her new Interior Minister Horst Seehofer and her new Finance Minister Olaf Scholz.

Renewal will be an important theme for the fourth Merkel government, because for most political pundits in the German capital, the chancellor is stumbling rather than gliding into the new term.

The serene untouchability that has made her so successful so far has eroded over the last few months. Her Christian Democratic Union (CDU) scored its worst-ever election results last September — 33 percent was much more than any other party got, but looked like a defeat for a party that was used to persuading over 40 percent of Germans. Then came the rupture of the "Jamaica" coalition negotiations with the free-market gurus of the Free Democratic Party (FDP) and a relatively conservative Green party. 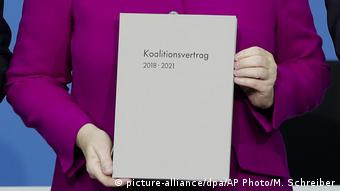 That three-way coalition would have been a first at federal level in Germany, and would have looked like a fresh plan to an electorate that had grown weary of the two big centrist parties that had governed the country for eight of the last 12 years.

But in the end, the FDP abandoned the talks, and then declared, damningly for the chancellor, that it would only join a coalition with the CDU without Merkel at the top.

Merkel addressed the issue of renewal before dozens of reporters on Monday by underlining all the changes she had already made and the new projects she had ahead: Restructuring of the federal government by adding construction and "Heimat" ("homeland") briefs to the Interior Ministry, and making "digital affairs," education and job training particular new foci.

She also made a point of noting that, apart from her own and that of Defense Minister Ursula von der Leyen, all the cabinet posts were about to be taken over by new people. "That will change all the discussions," she suggested. This government might look the same, she was implying, but really it's different.

Josef Janning, German political analyst at the European Council on Foreign Relations, is skeptical that Merkel herself can personally do much to win back lost voters. "She has introduced a couple of fresh faces, and they will have to do it," he told DW. "She will have to be the one to let them shine, to let them bring out innovation in a way that is not egocentric, but team-spirited. If she can do that, she can give the impression that new things are happening."

Her most important policy area is Europe, Janning said. "She will have to demonstrate that she can reinvigorate Europe as an idea," he said. "And I believe she is serious about trying."

Janning also thinks that the last few months have served as a corrective to European perceptions of Germany. "Before the election, Germany seemed to be the exception to all the rules of European politics, with no major anti-EU party, with a boring election campaign," he said. "This has been shattered. Now we're back to being a more or less normal country, led by a more or less normal political leader."

This emphasis on renewal came out of the two awkward tasks that Merkel faced after the demise of the Jamaica coalition. First, she had to persuade her old partners, the Social Democratic Party (SPD), to join her in yet another "grand" coalition even though party leader Martin Schulz had ruled that out. Second, she had to sell the resulting coalition contract — which included some significant concessions to both the Social Democrats and her right-wing Bavarian allies the Christian Social Union (CSU) — to her own disgruntled party.

The heavy price for a fourth term has been noticeable in the CDU. Merkel had to appoint a right-wing CDU rival,  Jens Spahn, to her new cabinet as health minister, even though he has a rather different view of what the conservative party should do.

Not that Merkel is exactly progressive on social issues. Despite much talk about how she has dragged her party to the left, she voted against gay marriage in the Bundestag at the end of the last legislative period last summer, and rather infamously refused to describe herself as a feminist last April, while taking part in a podium discussion alongside some of the world's most powerful women. The debate was entitled "Inspiring Women."

Nor does she seem to set much store by diverse representation in the federal government: Only six of the 15 ministers in her new cabinet are women, none belong to an ethnic minority, and only one is from the former East Germany. 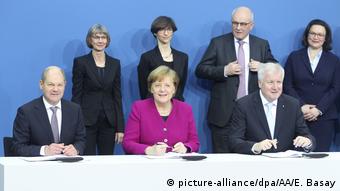 Merkel's longevity has often been put down to her careful, passive leadership style — it is often noted that she avoids big visionary speeches, instead seeking consensus while imposing her authority behind the scenes.

"Her leadership style is always compared to the same old, muscular, male-style politics," said Johanna Mair, professor for organization, strategy, and leadership at the Hertie School of Governance. "If we do not have leaders that are not testosterone-hijacked, male-style politicians, we are doomed. I am quite sure that we will evaluate her leadership in a couple of years very differently than today."

But the decline of the CDU and the SPD suggests that quiet centrism and compromise is falling out of fashion among the populace at the moment.

Janning doesn't think that will impress the chancellor. "Nothing is going to change Angela Merkel," he said. "As long as the outcome is alright, which in the eyes of many people in this country, and also beyond, is still the case, then the method is alright." Though her passivity in the coalition talks was criticized, "in the end what counted, in her approach to politics, is that she delivered a coalition."

For that reason, Janning doesn't think Merkel will develop the freer attitude often adopted by second-term US presidents. "A relative success will be if she manages to keep the coalition together in this electoral period, and also prepares the ground for somebody else to get a good result for the Christian Democrats in the next election," he said. "If she can do that, that will be considered a remarkable success."

A new grand coalition of Chancellor Merkel's CDU/CSU and the Social Democrats (SPD) depends on the approval of SPD members. But it's not just about forming a new government — it's about Germany's role in Europe. (04.03.2018)

From state-funded cleaners to "wolf removal," here are five curiosities that made it into the coalition agreement Germany's governing parties signed in Berlin on Monday. (12.03.2018)