A new grand coalition of Chancellor Merkel's CDU/CSU and the Social Democrats (SPD) depends on the approval of SPD members. But it's not just about forming a new government — it's about Germany's role in Europe. 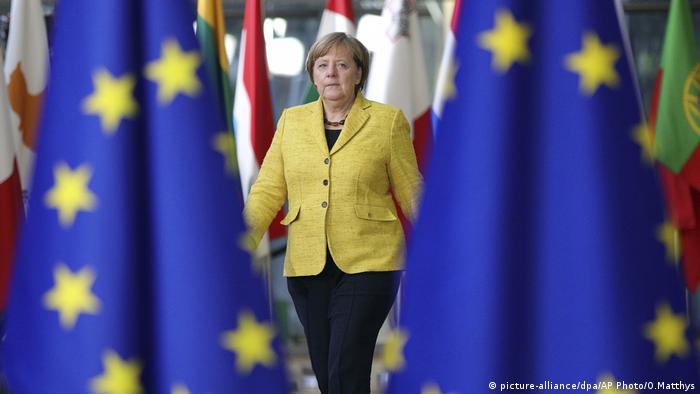 Germany is waiting to hear whether the Social Democrats have voted in favor of another coalition with Chancellor Angela Merkel's conservatives.

More than 460,000 members' ballots arrived at party headquarters on Saturday, and volunteers have been counting votes overnight ahead of an anticipated announcement by party leaders at 9 a.m. in Berlin (0800 UTC). 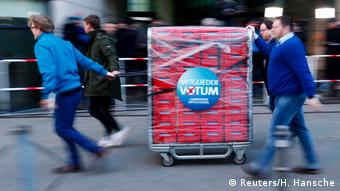 Ballots arrived at the SPD party headquarters on Saturday

The European Commission is preparing itself for the worst-case scenario, Commission President Jean-Claude Juncker said in discussions last week. He is also concerned about the outcome of Sunday's parliamentary election in Italy, in particular that Italy may "not get an effective government" due to an unclear majority structure.

Juncker even brandished the specter of financial market turmoil, although he later said that he had been misunderstood. He cited the SPD members' vote as a further reason for his concern: Without the SPD members' agreement, there will be no grand coalition and therefore no government for Europe's leading power.

Merkel also appreciates the importance of a future government for Europe. In her most recent government statement on European policy last week, she said, "We need a new start for Europe."

This was even outlined in the coalition agreement — 2018 is the year in which the foundations for the future must be laid. But she is still only making such statements as the acting chancellor. She gave the impression, after the recent EU special summit, that European partners are now expecting German politics to deliver a stable government. This was a clear solicitation to SPD members to agree to form a coalition with the conservative Christian Democratic Union and the Christian Social Union (CDU/CSU).

But will panic break out in Brussels if no grand coalition is formed in Berlin?

According to Janis Emmanouilidis of the Brussels-based think tank European Policy Center, this is not the case. However, Emmanouilidis believes it would produce "a sense of uncertainty, since one of the strongest players would not have a government able to make serious decisions." That is why Brussels is hoping very much that a grand coalition will be formed, he said.

But, Emmanouilidis said, even if a coalition is formed, Merkel will no longer hold the position as the undisputed leading figure in Brussels, which she was until the German parliamentary election. A few years ago, Time magazine named her "Frau Europa." When Donald Trump became US president, some English-language media even styled her as the leader of the entire Western world.

But that is in the past. At the end of last year, Time named French President Emmanuel Macron as the "next leader of Europe." While Merkel's party lost a lot of support in the German election, Macron emerged as the big winner of the 2017 French presidential election. And while Macron held receptions for difficult presidents — Trump, Russia's Vladimir Putin and Turkey's Recep Tayyip Erdogan — which he, in each case, mastered effortlessly, Merkel has spent the last six months in exploratory talks and coalition negotiations.

According to Stefan Seidendorf, deputy director of the Franco-German Institute in Ludwigsburg, Macron has not superseded Merkel, but "he uses the Fifth Republic's instruments of power very strongly." He employs diplomacy or the military, for example, to emphasize France's influence in Europe and throughout the world, Seidendorf explained.

On the European stage, for instance, Macron has presented reform proposals and called for a finance minister and a budget for the eurozone. In Germany, these moves have been viewed with skepticism, especially by the CDU/CSU. Once again, Berlin has found itself on the defensive. The leader of the Free Democrats (FDP), Christian Lindner, is already bemoaning that while France has become the front-runner, the German government has nothing better to offer than simply to echo ideas from Paris.

Leading position only together with France

Emmanouilidis said if Merkel renews her chancellorship with another grand coalition, she "will continue to play a strong leading role in the future." Germany's importance remains unchanged, he said. "At the same time, there is a stronger balance between member states." Above all, the relationship between Germany and France is "more balanced today than it was a few years ago," he said.

In addition to the resurgence of France under Macron, the long exploratory talks and coalition negotiations in Germany have also played a role, said Emmanouilidis. Even though the euro crisis has lessened, and there are now other challenges, Germany's weight is no longer "the same as before," he said. He argues that, from a European perspective, this is "good news," because it will make it easier to implement common reforms.

The bad news, on the other hand, is the division in Europe, which is perhaps deeper today than ever before. The Visegrad states in eastern central Europe, made up of the Czech Republic, Hungary, Poland and Slovakia, are not prepared to make any concessions whatsoever. This is especially the case with regard to refugee policy, which Merkel, in particular, has repeatedly demanded of them. And the next major disagreement could be about the EU budget.

Merkel has already offered to cover part of the British EU payments that will be missing in future. In Germany, she has been accused of selling out. FDP leader Lindner said "this has weakened the German negotiating position." Alice Weidel, parliamentary party leader of the right-wing populist Alternative for Germany party (AfD), said that for the chancellor, "more responsibility for Europe" meant spending more money and foregoing national sovereignty.

Speaking of the AfD, at the moment about 20 percent of the seats in the European Parliament are held by right-wing populists. The moderate parties are afraid there will be even more after the next European elections in May 2019. Until then, the Commission and member states' governments want to offer citizens concrete solutions to their problems, so that they have no reason to vote for the right.

But there isn't much time left to solve these problems. If Germany's Social Democratic Party says no to the grand coalition on Sunday, leading to a new election, it would probably take another six months. This is precious time in which the leadership of Germany — of Europe's economic powerhouse and its most populous country — would not be involved in shaping any future course, leaving little time to take action.

The road to a new German government has become clearer: The SPD, Greens and FDP have agreed to coalition talks. So far, things may have gone well, but negotiations won't be easy, writes DW's Kay-Alexander Scholz.

SPD party leadership on Friday voted unanimously to go-ahead with formal coalition talks, the Greens and FDP are scheduled to hold similar party votes on Sunday and Monday respectively.