Angela Merkel: New German coalition deal will be good for EU | Germany | News and in-depth reporting from Berlin and beyond | DW | 22.02.2018

Germany has big plans for the European Union, the chancellor told parliament on the eve of a major EU meeting, but first Germany needs a new government. Still, the other parties' responses showed how divided Germany is. 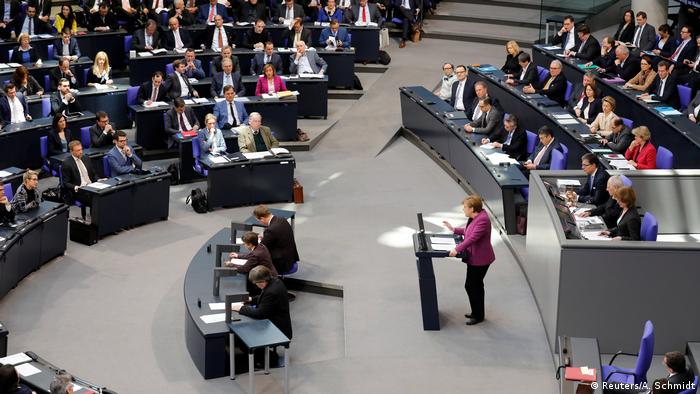 Merkel was addressing the Bundestag, Germany's parliament, a day before an informal meeting of the 27 European Union national leaders in Brussels. But the backdrop was the coalition agreement drawn up between her conservatives and the Social Democrats, which all parties involved need to approve before the Chancellor can form a new government.

Strengthening the EU is a central element of that deal between Germany's two largest parties, traditionally rivals, and Merkel said the agreement would offer "essential impulses" in reforming the bloc. She stressed that the coalition agreement was the first such deal to focus explicitly on policy toward the EU.

"We have to be prepared to support initiatives where they are better suited than national solutions," the Chancellor said in a speech that addressed three policy areas.

On the topic of refugees Merkel said that policy should focus on combating the reasons why people left their homelands to come to Europe. She also stressed that more effort was needed to crack down on human traffickers. She also said the coalition agreement with the SPD supported a common EU policy on refugees and that the EU agency for protecting its external borders, Frontex, would be "massively strengthened."

On economic matters, Merkel said that all EU member states had emerged solidly from the global financial crisis and were enjoying stable growth rates. She said that the "creation of a digital common market" was "the decisive issue." She also called for greater financial and economic "solidarity" between wealthier and poorer member states.

On security, Merkel said the first joint EU security measures would be introduced soon. The chancellor proposed that only by acting as a bloc could Europe play a central role in the solution of global conflicts. She also called for international measures to end the "massacre" committed by Syria against its own people. And she played down the "deficiencies" in the German military, the Bundeswehr, saying that steps were being taken to remedy shortcomings.

Social Democrats: EU is a bulwark of social equity 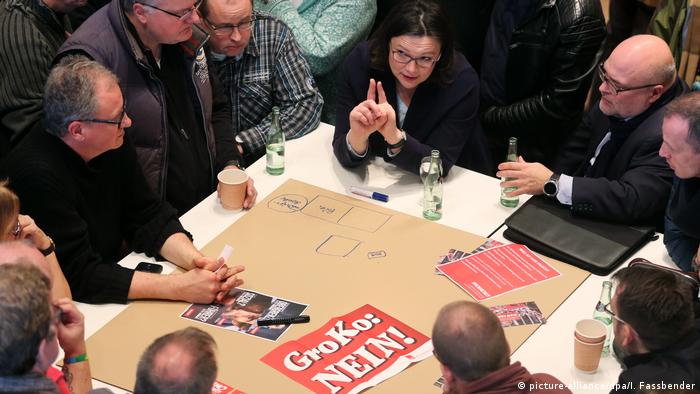 Merkel's conservatives are expected to approve the proposed grand coalition by a wide majority, but the vote among the SPD rank-and-file is expected to be far tighter. The designated chairwoman of the Social Democrats, Andrea Nahles, thus sought to connect the European Union with traditional SPD policies.

She depicted the bloc as a guarantor of "equity of living conditions" and said that a major priority was to increase social equality within and among the 27 member states.

She pointed out that the differences between rich and poor in the EU were far greater than in the US and said that the EU should institute a bloc-wide minimum wage to combat poverty and ensure competitive fairness. She also said that the EU was a bulwark against economic attacks from outside Europe "be they from California or China."

It was Nahles' first appearance before the Bundestag as the leading figure of her party. As the largest opposition party in the Bundestag, the far-right Alternative for Germany (AfD) spoke next. It was the first time that the AfD responded in parliament to a governmental declaration, and party co-chairwoman Alice Weidel came out shooting from the hip.

Weidel accused the government of giving away national sovereignty and pumping funds into a "bloated EU apparatus" with "gigantic budget deficits" and full of "overpaid EU bureaucrats of whom there are far too many."

"All you can do is spend other people's money," Weidel said. "That's a declaration of bankruptcy."

Whereas the governing parties stressed the common interests of Germany and the European bloc, Weidel portrayed national and international interests at odds with one another. She called for dramatic cutbacks to the EU's budget and areas of responsibility, sketching out a vision of a "Europe of fatherlands" — a phrase also used by other European far-right parties such as the Front National in France.

Other parties criticize government and AfD 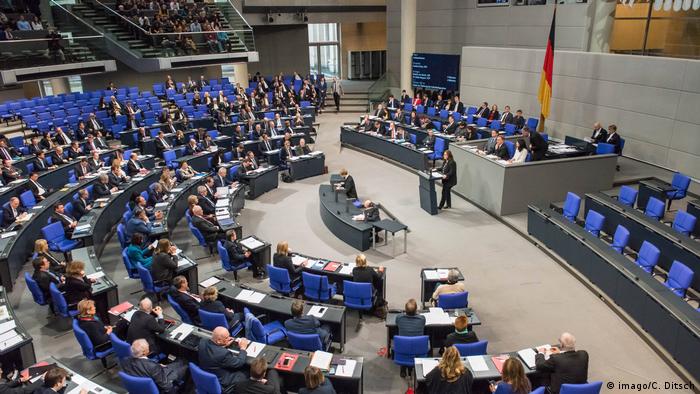 With 709 seats, the 19th Bundestag is the largest ever

As the head of next largest party, the chairman of the free-market Free Democratic Party (FDP), Christian Lindner, began by attacking the AfD.

He attacked Weidel for failing to mention that "German contributions to the EU ensure access to the common market" and said that reducing the role of the EU would lead to the "same chaos as in the UK." But he also took Merkel to task for lacking a "clear plan" for EU reform.

Left Party Parliamentary Leader Dietmar Bartsch criticized Merkel for letting lengthy periods elapse between governmental declarations. He said that the EU as a "project for peace" was endangered by poverty and lack of future prospects for some EU citizens on the one hand and "absurd levels of wealth" on the other. He added that this was why there was "less acceptance for the EU" as an institution in the bloc.

Speaking for the Greens, parliamentary co-leader Katrin Göring-Eckardt called for "more Europe and less nationalism" and better resistance to attacks on the bloc "from within." To that end, she said the EU needed "passion and not just administration."

And in response to scattered heckling from AfD parliamentarians, she said that the far-right populists had "questioned" values of "democracy and humanity."

All in all, the tone was somewhat sharper in the largest parliament in post-war German history than in past legislative periods.  But the presence of the AfD has changed neither the basic tenor of Bundestag debates nor the fact that a large majority of Germans support a robust European Union.

Merkel: 'Germany can only thrive if Europe thrives'