German lawmakers have agreed to lift the suspension of family reunifications for migrants with so-called "subsidiary" status. The reunifications bill is a breakthrough in Angela Merkel's bid to forge a new government. 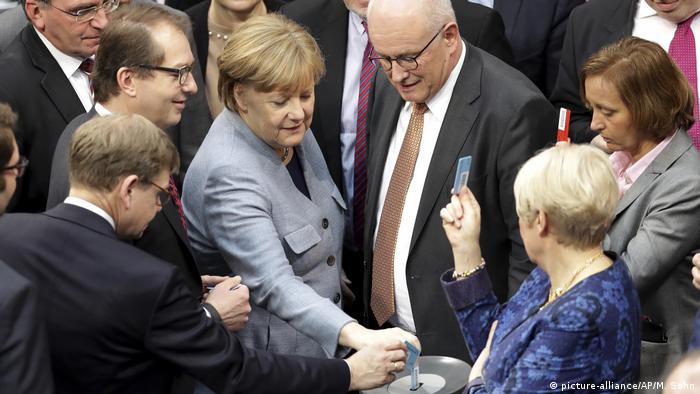 The German lower house voted on Thursday to partially reintroduce a law allowing lower-level-migrants to bring their closest relatives with them to Germany.

From August 1, a maximum of 1,000 additional migrants will be allowed to settle in Germany per month, provided they are direct relatives of refugees already living in the country.

The new law, tabled by Angela Merkel's conservative Union and the Social Democrats (SPD), passed by 376 to 248 votes.

In March 2016, Germany imposed a two-year suspension on family reunifications for migrants with so-called "subsidiary" status, a lower level of protection that falls short of full asylum. The suspension, set to expire in March, will instead be extended by just over four months, before being lifted in August.

Although the decision to impose a monthly cap prompted scrutiny from both the Bundestag's left- and right-wing parties, German Interior Minister Thomas de Maiziere defended the decision. "Our compromise stands for humanity and responsibility, for integration and limitations, for generosity and realism," he said.

"Some idealists think we are too strict," de Maiziere added, before insisting that exceptional cases for reunification would not fall under the monthly quota.

Restrictions on families have a particular bearing on many Syrian refugees in Germany, who were only granted subsidiary protection because they were fleeing a civil war and couldn't prove they had been personally persecuted. In theory, migrants from Syria with subsidiary status will be required to return home once the civil war is officially over and the German government rules it is safe to go back.

Ahead of the vote, some 100 affected migrants gathered outside of the Bundestag to protest against perceived shortcomings of the bill.

Despite passing in the Bundestag, details to the law still need to be fleshed out. For example, it remains unclear how the 1,000 people permitted to come to Germany will be selected.

The bill also gives the government the power to resettle 1,000 migrants per month but by no means compels it to do so.

The new law was not welcomed by all in the Bundestag. Germany's Left Party and Greens rebuked the new law's monthly cap, calling instead for migrant family reunifications without restrictions.

The Left Party's parliamentary leader, Dietmar Bartsch, said Germany's had a "moral duty" to allow all migrants to settle in Germany with their families, while Katrin Göring-Eckardt of the Greens accused the Union parties and SPD of turning a legal right into a "privilege."

Meanwhile, the head of Germany's Free Democrats Christian Lindner questioned the use of thresholds to deal with migration.

"Quotas are not a means of convincing or inspiring people," Lindner told broadcaster ZDF. The FDP has called for family resettlements to only be allowed in extreme circumstances and to be considered on a case-by-case basis.

"One thousand migrants is not a sensible approach to migration policy," he said. "Why not 500? Why not 2,000? This is simply Merkel's method of finding some kind of compromise."

The anti-immigrant Alternative for Germany (AfD) voted against lifting the suspension. Speaking before the German parliament, AfD lawmaker Christian Wirth argued that that Syrian families should be reunited and resettled in "safety zones" in Syria, rather than in Germany.