Angela Merkel's conservatives and her SPD allies were understandably upbeat during the signing of Germany's grand coalition agreement in Berlin. For the opposition parties, however, plenty of skepticism remains. 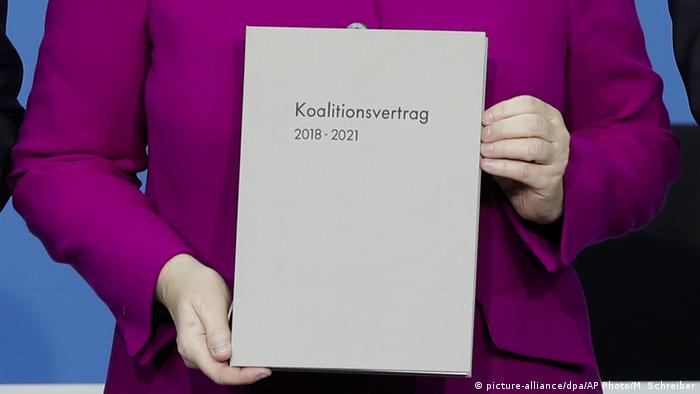 The phrase "A new departure for Europe — a new dynamic for Germany — a new cohesion for our country" is written across the front of the 179-page grand coalition agreement. It's Germany's third such alliance since 2005 between the conservative Christian Democrats (CDU), their Bavarian sister party, the Christian Social Union (CSU), and the center-left Social Democrats (SPD). All have been led by Angela Merkel, who is due to be re-elected as chancellor by parliament on Wednesday. Her cabinet will include CSU Chairman Horst Seehofer as interior minister. Hamburg Mayor and acting leader of the SPD Olaf Scholz will be minister of finance.

At a press conference marking the coalition deal's signing in Berlin on Monday, Seehofer said he is "very satisfied" with the deal, while Scholz predicted that it will move the country forward. Six months after the general election, Merkel said it's "time to get down to work at last." The new government will not set out a 100-day program, she said, but will be holding a closed cabinet meeting in the coming days.

There will be a wide variety of topics on the agenda: Domestic security, full employment by 2025, protecting Europe's external borders and the relationship with the United States, Russia and China. 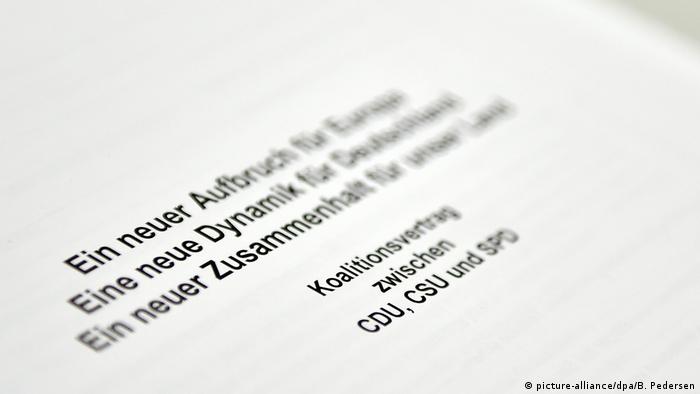 As the man in charge of Germany's purse strings, Scholz — to begin with, at least — shares both the aims and optimism of his new boss. He told reporters he wanted Germany to have a "living democracy," a "strong economy" and a "robust job market."

Seehofer described the alliance of the CDU, CSU and SPD as "a grand coalition for ordinary people."

The Greens and the free-market liberal Free Democrats (FDP) have said they will give the coalition 100 days grace before assessing its policies. The Greens chairwoman, Annelena Baerbock, and her FDP colleague, Christian Lindner, made no bones about the fact that their expectations are low. The same is true of the leaders of the right-wing populist Alternative for Germany (AfD), Jörg Meuthen and Alexander Gauland.

Coalition agreement 'from another era'

The Greens' Baerbock has called for improvements in the field of environmental protection. There is no mention of climate protection in the agreement, an omission Baerbock said must be corrected. She also said the new government has made a "complete false start" on European policy before even taking office. 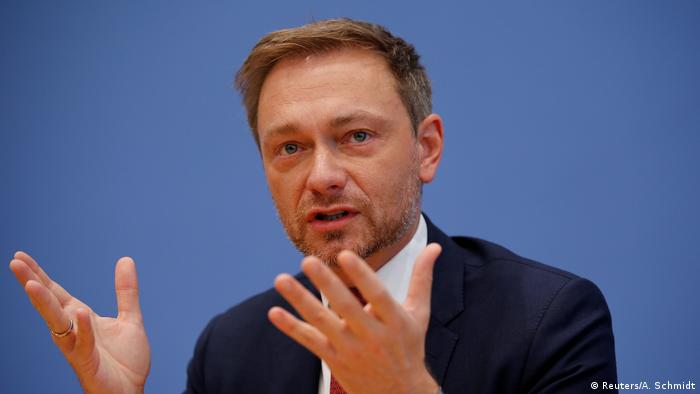 Lindner has low expectations for the new grand coalition

Read more: Who will be in Merkel's new Cabinet?

From Lindner's point of view, the coalition agreement was out of date "before the ink was dry," describing the deal as being "from another era." The FDP leader believes it lacks policies for the German middle class. He said the agreement conveys a sense of an "absolute fixation on the state," its citizens depicted as needy and weak, or as patients — people "who need looking after."

For the AfD duo Meuthen and Gauland, the coalition deal also reminds them of "another era," saying it was formulated in the language of "East German Five-Year Plans," and exuded the "spirit of the 1970s." They complained that the government wants to "pump" even more money into the EU, and warned that "there is no upper limit" on immigration. "The injustice continues," they said. The pair don't believe many refugees will return voluntarily to their countries of origin. "Why would people return voluntarily when they have a much better life here?" they asked. With regard their own role in Germany's parliament, the Bundestag, they declared: "We are the true opposition.”

Bernd Riexinger, co-chair of the Left party along with Katja Kipping, made an almost identical claim. "We are the social opposition," he said. The Left's view is that the government is trampling on those lower down the social ladder. Riexinger said that his party wanted to see a redistribution of wealth, not exclusion. In order to achieve that, Riexinger said the Left would form social alliances outside the parliament, "to up the pressure on the coalition."