Ansbach in a state of shock

A day after a Syrian refuge blew himself up in Ansbach in southern Germany, the small city is still under shock but determined to keep going. 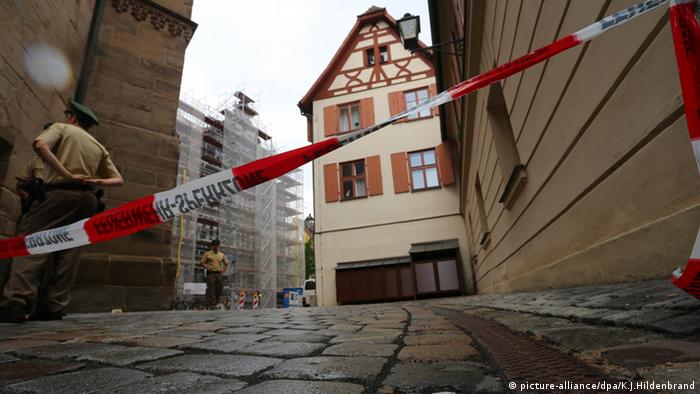 First, they heard a loud bang, then there was the sound of helicopters and sirens, people in Ansbach say about Sunday evening, when a 27-year-old Syrian blew himself up in their small city.

"It's a strange feeling," said a young woman walking past the crime scene the next day. She was safely at home when it happened, but only by about an hour as she, too, visited the local annual open air festival in town. "We live in a small city, we never thought anything like this could happen here," her mother added. Both peer at the small inn behind the archway that marked the entrance to the festival grounds.

The extent of the damage is still visible on Monday afternoon, after the police investigators left: a bench in a wine tavern is dotted with glasses half-filled with wine and empty beer bottles, and the attacker's body is outlined with chalk on the floor, surrounded by dried splattered blood, splintered wood and glass.

On Sunday, the Syrian blew himself up with explosives he was carrying in his backpack. Sharp bits of metal in the pack could have killed many people, Bavarian Interior Minister Joachim Herrmann said on Monday morning.

"When I heard the police sirens, I knew it's either a gas explosion or a terrorist attack," said Nikolas, a 21-year-old web designer. He wasn't at the festival and plans to steer clear of such mass events in future. After a 17-year-old attacked people with an ax in a train to Würzburg only days long ago, he said he feels as if the terror is coming closer.

Other Ansbach residents disagree. "I don't want to live in fear," a young woman with a baby in her arms told British reporters. She said she still feels safe in Ansbach. 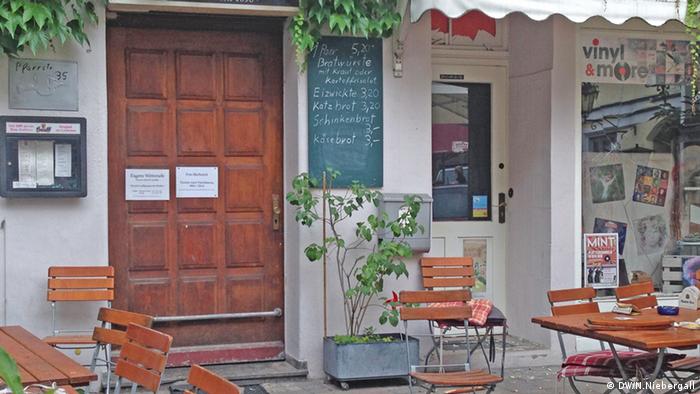 Not far from the Hotel Christi, a former hotel that now houses refugees, an elderly man and a young woman stand chatting over a garden fence. They agreed they don't intend to change anything about their lives in Ansbach - or their attitude toward refugees. "They always say a friendly hello when they pass by on their way to their language classes," the man said. "You can't generalize."

The suicide attacker lived in the former hotel, too. Police have cordoned off the building, and closed the rolling blinds on the second floor. Authorities searched the building on Monday, reportedly coming up with a fuel canister, hydrochloric acid, alcohol cleanser, a soldering gun, wires, batteries and pebbles. They also found the attacker's laptop, which contained pictures glorifying violence - a link to the "Islamic State" (IS) terrorist militia. The link became even clearer on his mobile phone, which had a video threatening an attack. The IS has meanwhile claimed responsibily for the attack.

But a fellow-resident at the refugee shelter, 28-year-old Mubariz from Pakistan, paints a different picture of the Syrian, saying he was friendly when they happened to meet in the communal kitchen.

He tended to keep to himself, Mubariz said, adding that he never knew the man's given name since most of the Hotel Christi refugees nicknamed him "Rambo" because of his long hair and muscular upper body. "He was hoping the Germans wouldn't send him back to Bulgaria," Mubariz said, where he first enetered Europe.

The Syrian had come to Germany two years ago and applied for asylum, which was denied. He wasn't deported then, but instead, his presence in Germany was officially "tolerated". Twice, he tried to commit suicide when he learned he was going to be deported to Bulgaria after all. He spent some time in a psychiatric clinic, too, the Bavarian Interior Minister said. He never knew about that, Mubariz said, adding that he always felt "Rambo" was just a regular guy.

Now that the police have removed the tape around the crime scene, life in Ansbach seems to continue as usual.

Only the many reporters rushing back and forth along the alleys of the city's old town, and the huge TV broadcast trucks on the main square are proof of Sunday's crime.

What effect will the attacks in Munich, Würzburg, Reutlingen and Ansbach have on Chancellor Angela Merkel? It all depends on whether she plans to run for a fourth term, says DW's Kay-Alexander Scholz. (25.07.2016)

What happens with rejected asylum applicants who are not deported?

Rejected asylum applicants must leave Germany or be deported. But many, like the Syrian refugee who blew himself up in Ansbach, Bavaria, are "tolerated" by the authorities and stay on. How does that work? (25.07.2016)

A video alluding to the Islamic State militia has been found by police on the mobile phone of the bomber in Ansbach, says Bavaria's interior minister. Joachim Herrmann says the Syrian was a rejected asylum-seeker. (25.07.2016)