Bavarian Premier Markus Söder was mocked on social media for the self-referential ambitious new plan. Bavaria wants not only its own space program, but also its own Hyperloop track. 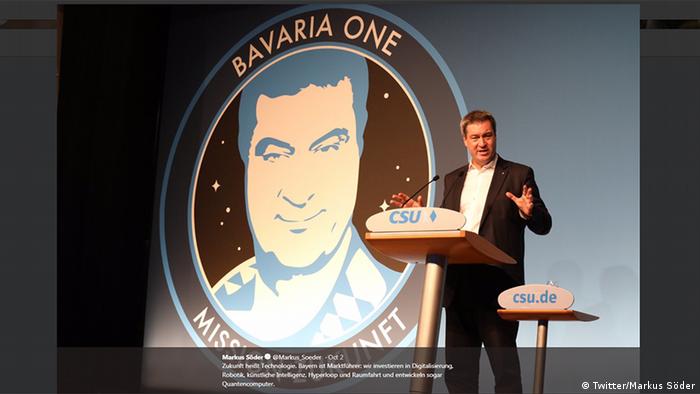 Bavarian Premier Markus Söder was ruthlessly mocked on German social media on Thursday for the way he presented plans for a dedicated space program for the southeastern German state.

Söder described his plans during a meeting of his Christian Social Union (CSU), the Bavarian sister party of Chancellor Angela Merkel's Christian Democrats (CDU). The party convention was widely watched as Bavaria gears up for regional elections on October 14, and polls indicate that the CSU, which has dominated Bavarian politics for decades, is about to receive its worst results since 1950.

One solution that Söder has proposed to combat voter drift away from the CDU toward the far-right Alternative for Germany (AfD) and the Green party    is strengthening Bavaria's already sizeable aerospace research. In late September, the regional government had already announced a new department at the Technical University of Munich, complete with 30 new professorships.

But it was the unveiling of the "Bavaria One: Mission Zukunft"  ("Bavaria One: Mission Future") that got Söder international attention on Tuesday, as he was standing in front of a giant emblem for the program bearing his own face. "Bavaria is the market leader," he said, "we are investing in digitalization, robotics, artificial intelligence, Hyperloop, and space travel."

German Twitter users swiftly took Söder to task for what was perceived as hubris, with many making negative comparisons to the NASA logo:

Some called the mission "Little Söder's Journey to the Moon" in reference to a well-known German children's tale, while other commentators accused him of having "delusions of grandeur."

Söder, who had himself tweeted the image without any explanation, has hit back at his critics, saying that the logo was not his or the government's, but had been used for weeks by the youth branch of the CSU/CDU bloc as an advertising gag during the campaign. He accused some media of propagating "fake news" in their reporting.

According to a press release put out by the CSU, Bavaria One is a €700-million ($805-million) project that will include a 400-meter-long (437-yard-long) track for testing a prototype of the Hyperloop transport system and digital start-up incubators.

The CSU did not confirm if its new space exploration plans will be done in conjunction with the German Aerospace Center (DLR) which already has a large unit focusing on these topics near Munich. However, its vice director, Florian David, wrote on Twitter that he was "looking forward," to some of Söder's plans, including the new academic department in Munich.

Bavaria has unveiled its very own Center for Asylum and Repatriation. But its isolationist approach is sowing division and actually harms the state's ruling CSU party, writes DW's Maximiliane Koschyk. (28.07.2018)

Teachers for AI — can robots create more jobs than they retire?

While headway in the artificial intelligence (AI) industry has many worried about potential jobs losses, others see this as a perfect opportunity to nurture an economy that is completely human-based. (25.10.2017)

The MASCOT lander is equipped with a special microscope to examine the minerals on the asteroid's surface. Scientists hope this will help unlock the mysteries of the solar system's beginnings. (03.10.2018)