Angela Merkel and Bavaria: What Germany′s regional election means for the chancellor | Germany| News and in-depth reporting from Berlin and beyond | DW | 17.09.2018 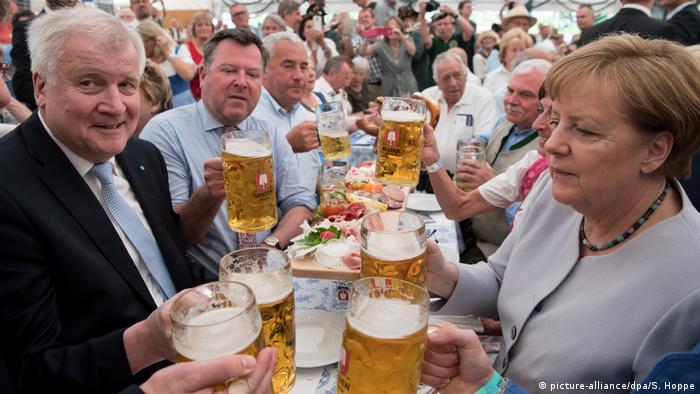 With less than four weeks to go before regional elections on October 14, Bavaria's conservative party, the Christian Social Union (CSU), is reeling. Since July the CSU, which is accustomed to racking up absolute majorities, has languished below the 40 percent mark in public opinion surveys.

As is the case elsewhere in the country, the rise of the far-right populist Alternative for Germany party (AfD) has eaten into support for traditional conservatives in Germany's largest state by area. You might think that the looming electoral debacle in Bavaria would be bad news for conservative Chancellor Angela Merkel and the CSU's national sister party, the Christian Democratic Union (CDU).

But in many respects, it's not. The AfD has proved disruptive to German politics on a host of levels, and this is a case in point. Worried that it was being outflanked on the right, the CSU made a point of distancing itself from Merkel on key issues, including the chancellor's welcoming policy toward refugees and migrants.

Thus the perverse scenario has emerged of a conservative chancellor profiting from a conservative defeat. Meanwhile, her rivals could be in for a real battering. Merkel's authority has come under greater fire from her own parliamentary group than ever before in her 13 years in power. Bavarian conservative politicians such as CSU Chairman and Interior Minister Horst Seehofer and Bavarian State Premier Markus Söder led the way, publicly criticizing Merkel for being too far to the left, particularly on migration.

Merkel was pointedly not invited to participate in the CSU's campaigning. Indeed, in June, Söder was quoted as joking that the only chancellor at his final campaign speech would be a male one, Austrian leader Sebastian Kurz. Then in July, Seehofer insisted on Bavaria's right to deport rejected asylum-seekers in the face of European Union law and government policy. That precipitated a spat which threatened to destroy Merkel's grand coalition of the CDU/CSU and center-left Social Democrats.

But that was then, and this is now. Söder's snub has been revoked: Merkel will speak in Bavaria on September 30 at the express invitation of the honorary CSU chairman and former German finance minister, Theo Waigel.

Seehofer was forced to climb down over deportations, and he will now most probably also have to fire the Merkel critic Hans-Georg Maassen from his post at the head of Germany's domestic intelligence agency. Moreover, the weeks of conflict with the chancellor have taken a visible physical toll on the CSU leader.

Seehofer and perhaps Söder as well could become political casualties if the CSU's performance doesn't improve on the dire poll numbers. The CSU has not received less than 40 percent of the vote since the 1950s.

A couple of months ago it seemed as though Merkel was encircled by would-be alpha males taking aim at her. Now, her rivals appear to have collectively shot themselves in the foot. 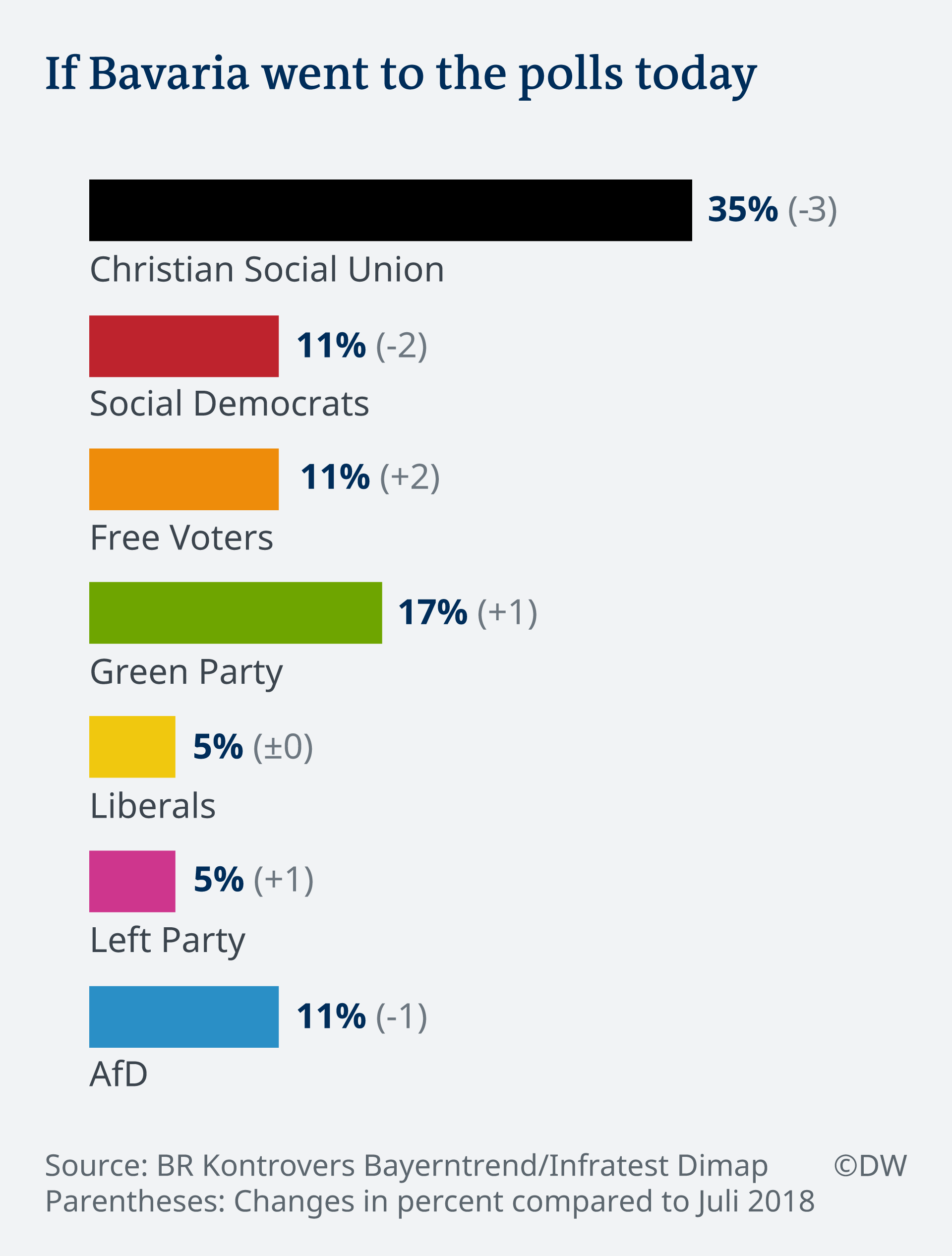 Black and green much to Merkel's taste

Meanwhile, although her authority has been undeniably diminished, Merkel remains the queen of German conservative politics. And the Bavarian election looks to reinforce her brand of moderation rather than bring about a lurch to the right.

It's no secret that Merkel is open to alliances with the Greens — a coalition with the environmentalists and the center-right Free Democrats was the first political option she sought to pursue after Germany's national election last year.

The CSU could be facing a similar prospect in four weeks' time. As the polls currently stand, the only option for a two-party coalition with a stable majority in Bavaria would be a so-called black-green alliance between the CSU and the left-leaning environmentalists.

Read more: Germany's political parties: What you need to know

There is no chance of the CSU being able to push through a hardline agenda in conjunction with the Greens, who have indicated a willingness to negotiate with all mainstream parties — but within certain limits.

"We would happily talk about an ecological, cosmopolitan and just Bavaria, but not about authoritarian and anti-European policies," Green co-chairwoman Annalena Baerbock recently told the Berliner Zeitung newspaper, clearly laying down a marker.

All other variants involve coalitions with multiple parties, making it highly unlikely that the CSU can move policy significantly to the right. 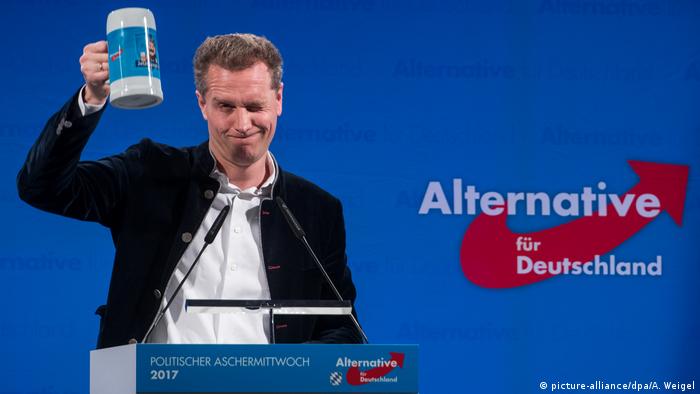 But while Merkel may have no reason to view the approaching Bavarian election with trepidation, the changing balance of power does present mainstream conservatism with some long-term challenges on the national level.

The CSU's dominance in Bavaria has been an integral part of the success of the CDU/CSU bloc in national elections. Throughout post-war German history, the Bavarians have delivered 20-30 percent of the total conservative vote. But the CSU's performance has declined apace with that of the conservative bloc generally.

The fact that the more reliable of Germany's two conservative parties has been equally susceptible to the erosion of support for the political mainstream has to be worrying. Next month's election will likely establish the AfD, currently polling around 11 percent, as a player in Bavarian politics. Its voters may have come from the CSU but are unlikely to go back any time soon. And the conservatives also have to contend with the Free Voters, an EU-skeptical group that wants to return political power to local authorities and that also polls around 11 percent.

The fragmentation of the political middle will likely continue, weakening the CSU and, with it, a pillar of conservatism on the national level. That might not be a problem for Merkel, who may decide against seeking a further term. But it would be a challenge for any potential conservative successor.