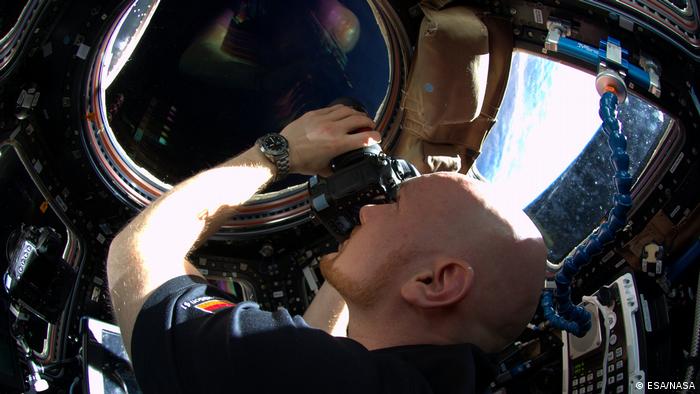 He is used to seeing the earth like never before from the International Space Station (ISS), but even Alexander Gerst was shocked at what he saw when he looked down on his homeland.

The German astronaut's pictures showed a brown landscape around Cologne on the River Rhine in North Rhine-Westphalia and a wider image of dried-out Central Europe. The European Space Agency (ESA) is based in Cologne, and the German Space Agency (DLR) is in Bonn and Cologne.

He later sent some images from 2014, showing green and well-watered fields:

The prolonged heatwave in Europe has caused a series of problems, ranging from the death of fish in unusually warm Swiss rivers to wildfires in dry forests from the Arctic Circle to Portugal.

The 42-year-old geophysicist and volcanologist on the ISS also sent images of Portugal showing what looked like a mixture of dust, sand and smoke:

However, some rain spread across France and Germany on Wednesday, helping to lower temperatures.

Gerst first took part in the ISS mission in 2014. Gerst was launched back into space with NASA astronaut Serena Aunon-Chancellor and Roscosmos commander Sergei Prokopyev in the Soyuz MS-09 spacecraft in June. He is in space working on 50 European experiments including some into how muscles and the brain react to living away from Earth.

On the ISS, 'Astro Alex' says he's found he has space 'muscle memory'

Alexander Gerst has said in a live-call event from the International Space Station that returning there proved surprisingly easy. Responding to a DW question, he said some of the processes were "like riding a bicycle." (12.06.2018)