A ton of dead fish has been recovered near the German-Swiss border despite man-made 'cool pools' to prevent fish fatalities. Europe is in the throes of a heat wave that is impacting life in many different ways. 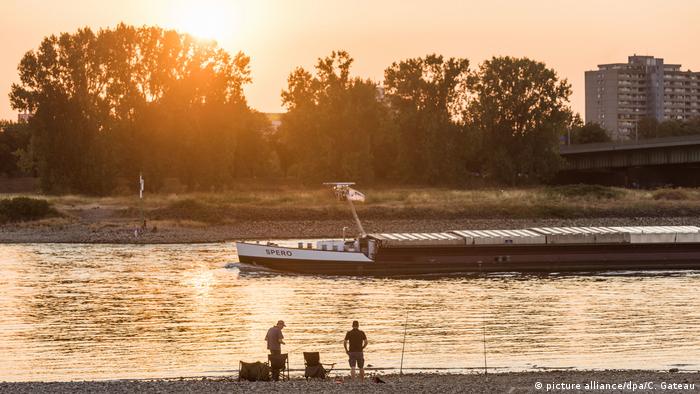 Europe's ongoing heat wave has claimed the lives of thousands of fish on the German-Swiss border. Authorities retrieved over a ton of dead fish from the upper Rhine River over the weekend, the Swiss Fishery Association confirmed on Monday.

Most of the fish were graylings, which thrive in 23 degree water. The heat wave caused the water to rise to 27 degrees in which the fish could not survive.

Switzerland's fishery association had tried to prevent the deaths by creating six pools of cooler water. Fish had taken shelter there last week, but the measures were insufficient to keep them alive.

Firefighters used their fire trucks to water trees in the eastern German state of Brandenburg.

The water levels in the River Elbe — which flows from the Czech Republic through Germany to the North Sea — decreased to a record low.

Authorities in France warned of increased ozone pollution on Monday because of the heat. Breathing issues, eye irritations and sore throats often result from the high ozone levels. The cities of Paris, Lyon and Strasbourg banned the most polluting cars from the roads, and four nuclear reactors were closed because of the heat wave.

Read more: Can German roads hold up against the heat?

Emergency services in Portugal meanwhile were fighting a huge wildfire south of Lisbon. Some 44 people needed medical attention including a 72-year-old woman who was in serious condition. The wind has spread the fire to a forest close to the beaches of the Algarve region which are popular with European tourists. Temperatures in Portugal have begun to fall from a peak of nearly 47
degrees Celsius.

Tank units in Switzerland switched to working nightshifts to protect roads from the army's 57-ton vehicles. The heat has softened the asphalt making it easier for the tanks to create holes and leave tracks, army spokesman Daniel Reist told Swiss news agency SDA. Temperatures peaked at 36.2 degrees Celsius on Sunday in the Swiss town of Sion.

Scientists have confirmed that the heat wave is linked to global climate change.

Extreme heat continues to grip Portugal and Spain, with little relief in sight. The continued hot, dry conditions are presenting great challenges to firefighters across Europe. (05.08.2018)