On the ISS, 'Astro Alex' says he's found he has space 'muscle memory'

Alexander Gerst has said in a live-call event from the International Space Station that returning there proved surprisingly easy. Responding to a DW question, he said some of the processes were "like riding a bicycle."

Only four days after arriving at the International Space Station (ISS) Alexander Gerst has already noticed a difference to his first stay, back in 2014.

"Before my second flight, I was asking myself: Where would I start with training my muscles", he told DW. "Would I start like a beginner again or would I have muscle memory of how to float in space?"

The answer turned out to be very clear, Gerst said: "My feet even memorized the position of certain footholds, that I didn't even know were there. But I realized, when I came into the station, that my feet knew exactly were they are. There is this amazing muscle memory: It is like riding a bicycle – you don't know, how you do it, but your brain somehow does it!"

Gerst has already started work on some experiments looking into the behavior of muscles in zero gravity. "We already did a grip experiment today and yesterday that deals with how human-robotic interfaces work in space or on earth."

It could be either used to develop better remote controls for vehicles in space or for example, to help surgeons on Earth to control tiny robotic instruments. "That requires very similar processes, that we need to understand," Gerst said. "It is an experiment, here at the space station that will have a lot of benefits for people on Earth."

Sleeping in space is far too relaxed

Asked what he misses most in space, Gerst said that "falling into bed and relaxing." This is not possible in zero gravity, because the muscles are relaxed already anyway.

One of the next big tasks in Gerst's program are the preparations for an upcoming space walk. 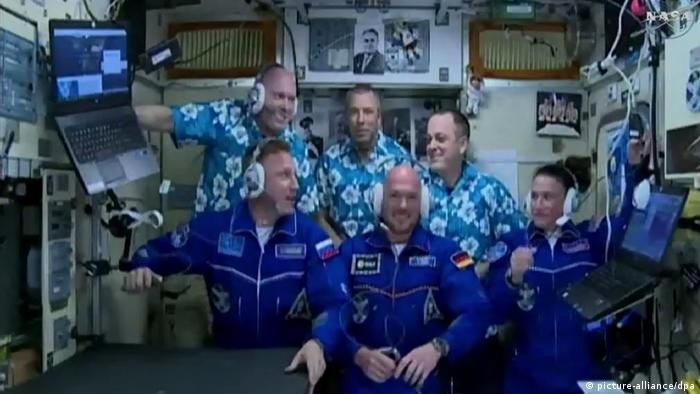 Last Friday on the ISS. The new arrivals were welcomed by the resident astronauts in Hawaiian shirts.

While loving his experiments, life in space is not just about work. Just a few days before the World Cup in Russia, the astronauts also have football on the brain: "I have made a bet with my colleague Sergey Prokopyev: If the Russian team wins, we will all have to paint a Russian flag on our foreheads. If the German team wins, he will copy my hair-style," said the shaven-headed Gerst. "I am very curious. Apparently the Russian and German team can only play against each other in the final rounds."

A change of perspective

Asked about how political news looks to astronauts on the ISS, Gerst admitted that the perspective changes: "We get our news with a delay of roughly one day. We are not always perfectly up to date. But that is not a problem. One looks at problems in a different way — with a greater distance: Smaller problems stay in the background. The big problems, one can see with a more complete perspective. I believe that one can understand some of the big problems better with this overview."

Asked about the talks between US President Donald Trump and the Norther Korean Leader Kim Yong Un, which took place the same day, Gerst welcomed them. With the ISS as a model of international cooperation in mind, he argued: "It is always better to talk with one another than to flex your muscles".