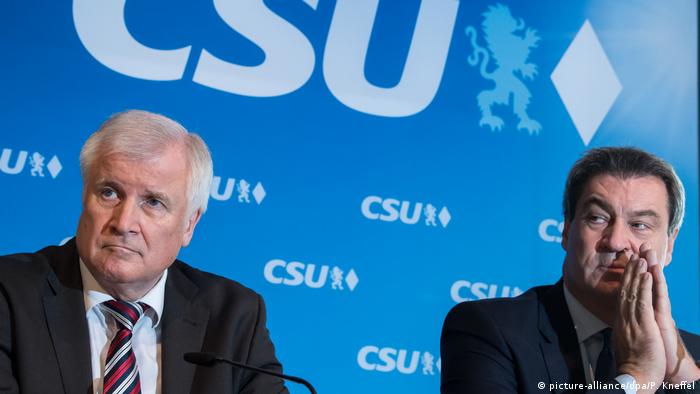 With just over a week to go before a regional election, support for Bavaria's Christian Social Union (CSU) has a hit a record low of 33 percent, a poll published Thursday by German public broadcaster ARD showed.

The results were a drop of 2 percentage points for the CSU since last month. The ARD poll also showed that 52 percent of Bavarians are partially or entirely unsatisfied with the current CSU government.

The conservative party, only present in Bavaria, has been bleeding support over the past months due to voter dissatisfaction over its hard-line immigration policies and challenges from parties on both the left and right.

It has historically governed alone in Bavaria thanks to a typical vote share of around 50 percent. However, should the results of Bavaria's regional election on October 14 mirror Thursday's poll, the southern state would be headed for a coalition government — a rarity in its post-World War II history that would also carry implications at the national political level.

The winner of Thursday's poll was Bavaria's Green party, the current runner-up to the CSU. The Greens scored 18 percent support — an increase from 8.6 percent in the last regional election in 2013.

The center-left Social Democrats (SPD), on the other hand, polled at 11 percent — roughly half of what they received in 2013.

Support for the far-right Alternative for Germany (AfD) dropped slightly since last month to land at 10 percent.

CSU politicians have argued the AfD lies beyond the boundary of the acceptable right-wing politics. Yet at the same time they have tacked rightward on issues like immigration and police powers to try and keep voters from migrating to the AfD — a tactic which has sent many Bavarians toward the more socially liberal-leaning Greens.

The business-friendly Free Democrats (FDP) and the socialist Left Party polled 6 and 4.5 percent support respectively, while independent voters were at 11 percent.

The poll results suggest Bavaria is headed for a coalition government, something which 71 percent of Bavarians support in comparison to the 23 percent that support a government run solely by the CSU.

On Thursday, Markus Söder, the current CSU state premier, warned against the "totally unstable government" a coalition in Munich would deliver. He also took a stab at the more equal distribution of political power among various parties that occurs at the national level: "I don't want the Bavarian regional parliament to have a power balance like in Berlin," he said.

Söder put the blame for the CSU's poor showing on Angela Merkel's government in Berlin. "These numbers are all highly influenced by Berlin politics," he said in an interview with Germany's Bild daily. He added that "internal bickering always causes damages, no matter where it comes from" — a reference to political disagreements between politicians from his own party and its sister party, Merkel's Christian Democratic Union (CDU), as well as between CSU-CDU politicians and SPD coalition partners.

Söder also took indirect aim at his party chairman, Horst Seehofer, who serves as interior minister in Merkel's government and has advocated a crackdown on migration into Germany. "I admit: That wasn't exactly our finest hour," Söder said, referring to Seehofer's behavior as he advocated for his so-called master migration plan.

Seehofer's repeated clashes with Merkel have threatened to torpedo the national government. A poor showing by the CSU in Bavaria would weaken his position as a national minister, as well as that of the CSU in Berlin as a whole.

Bavaria's CSU party has dominated German national politics for weeks with its hard-line asylum policy. The media circus was viewed as an elaborate campaign strategy ahead of state elections, but has the plan backfired? (22.07.2018)