German Interior Minister Horst Seehofer has presented his long-awaited asylum "master plan." But he did not include the last-minute compromises made with coalition partners last week, which averted a government crisis. 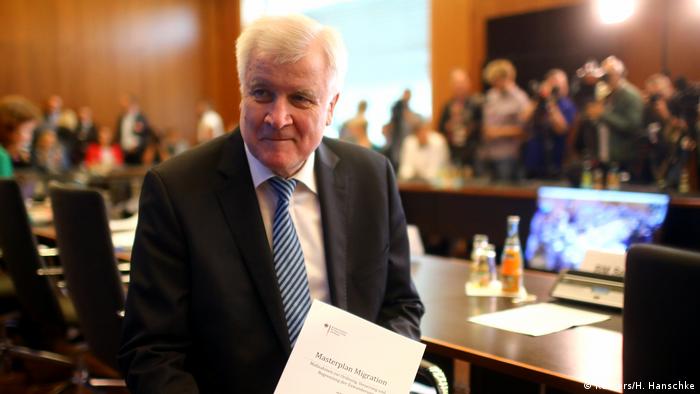 Interior Minister Horst Seehofer finally got to present his migration "master plan" to the press on Tuesday, a month after it was blocked at the last minute by Chancellor Angela Merkel, precipitating a crisis in the German government that almost cost them both their jobs.

Seehofer pointed out that the delayed release of his plans came on his 69th birthday, noting that this coincided with the deportation of 69 people to Afghanistan from Germany, quipping, "That was not on my order."

But the press conference in the Interior Ministry did little to assuage the government crisis, as he presented a document that did not include the 11th-hour compromises made by the government last week, which averted his resignation. 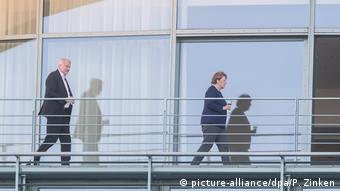 Seehofer had actually agreed to some compromises with Merkel last week

The document published on Tuesday, he said, had been finalized on July 4, which meant that it did not include the amendments made by the coalition's junior partner, the Social Democratic Party (SPD). He admitted that it was not yet clear which measures contained in the plan the center-left party would agree to.

Perhaps most provocatively, Seehofer's plan still contained the term "transit centers," which has already been ditched by the government because of an SPD veto. Nevertheless, the interior minister refused to admit this was a provocation – at least not in so many words. "It is not a provocation, but if you like you could also see it that way," he told the Bild newspaper elliptically.

Seehofer's long-awaited master plan, now effectively published after it has gone out of date, included so-called transit centers situated at the German-Austrian border, in which asylum-seekers would be held if another country was found to be responsible for their applications.

Instead, the German government, apparently worried by the prospect of keeping asylum-seekers in what might look like concentration camps, agreed last week to an SPD alteration: fast-tracked transit procedures in existing border police stations, which would ensure that asylum seekers are returned to other countries within 48 hours.

This will require bilateral agreements with other European Union countries, especially Austria, Italy, and Greece. Seehofer said that one such an agreement had already been made with Austria.

Other measures in the master plan (most of which are backed by Merkel) include:

- Tougher sanctions against asylum-seekers, especially those who return to their countries of origin while their cases are still being decided, as well as those who do not attend integration courses.

- More "anchor centers": Seehofer has long since called for these "one-stop" centers, where asylum-seekers will be registered, have their cases considered, and be deported from all as quickly as possible. However, these would have to be administered at state level, and Germany's state governments have been reluctant to implement the plans so far.

- More EU border protection: Apart from reinforcing the EU's border security force FRONTEX, as agreed at a Brussels summit at the end of June, Seehofer also wants to install "disembarkation platforms" in North Africa. The problem here is that no North African country has yet agreed to allow such a platform to be built. Merkel and Seehofer are both hoping that agreements similar to the one struck with Turkey two years ago can be reached.

Seehofer's decision drew irritation from his Social Democrat coalition partners, whose deputy chairman Ralf Stegner told the DPA news agency, "The SPD has no interest at all in another performance in the CSU summer theater. Our common master plan is and remains the coalition contract – and Mr. Seehofer has enough to work on there."

"The plan concentrates only on toughening the administration in procedural questions and neglects the most important thing: the people," he said. "The decisive question has to be how refugees can be effectively protected, not how they can be processed as fast as possible and then push the responsibility for them onto others."

The far-right Alternative for Germany (AfD) party also showed nothing but contempt for Seehofer's plan on Tuesday, with leader Alice Weidel condemning what she called "coalition ping-pong" that had led to a series of measures that did not amount to a real sea-change in Germany's migration policy.

The International Organization for Migration (IOM) tweeted on Tuesday that the total number of migrant deaths in the Mediterranean Sea had reached 1,422 this year.

German Chancellor Angela Merkel's conservatives have reached an agreement on asylum policy with the center-left SPD. There had been tensions over plans to turn away certain migrants at the border. (05.07.2018)