Horst Seehofer and Austria's Sebastian Kurz want to close a key route for immigrants and refugees arriving from the Mediterranean. Representatives from Austria, Germany and Italy will discuss the plan next week. 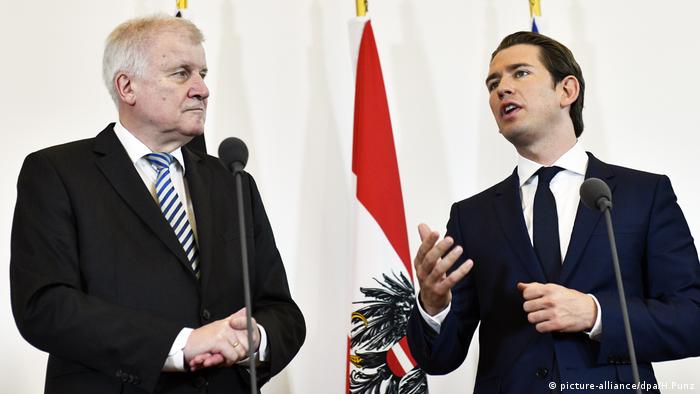 German Interior Minister Horst Seehofer traveled to Austria on Thursday to discuss a common approach to dealing with an issue that has been vexing EU nations for the past three years: migration.

Read more: What is the actual extent of the refugee crisis in Europe?

Although it was clear from the beginning that no final deal would be struck in Vienna, Austrian Chancellor Sebastian Kurz and his interior minister, Herbert Kickl, agreed that Austria could not be held responsible for immigrants and refugees denied entry to Germany after traveling to the alpine country via Greece or Italy.

Seehofer made that clear, declaring: "Neither now, nor in the future will we make Austria responsible for Italy and Greece's obligations. That was not my intention today, nor will it be in the future."

The men also stated their desire to close the so-called southern route as a means of limiting influx to northern Europe from the Mediterranean.

Go back to where you came from

A hardliner from Bavaria's Christian Social Union (CSU), Seehofer has caused trouble of late for Chancellor Angela Merkel of late with his tough stance on immigration.

Chancellor Kurz had previously voiced concern for Seehofer's plan to erect so-called transit centers at the German-Austrian border, the result of which could be large numbers of asylum seekers amassing in Austria.

Seehofer's proposal, which has directly threatened Merkel's ruling coalition, is to use the transit centers as a base from which to deport migrants back to the countries in which they first registered. Those migrants not registered will not be admitted into the camps but rather sent directly back to the border, meaning Austria.

That plan was agreed to in a compromise between the CDU and its CSU sister party late Monday night. However, its implementation is contingent upon approval by the center-left Social Democratic Party of Germany (SPD), which is partnered with the CDU/CSU in Germany's coalition government. The SPD voiced clear opposition to the idea during coalition talks as the new German government was being formed earlier this year and has reiterated that stance during the CDU/CSU inter-party wrangling of the past several weeks.

The result of such transit centers could be a domino effect in which Austria would be forced to close its border to Italy and Slovenia to keep migrants out of the country. Austrian Vice Chancellor Christian Strache (FPÖ) recently proclaimed that his government would, "Certainly not accept a solution that burdened Austria."

The Vienna meetings were billed as a prelude to another meeting next week between the interior ministers of Austria, Germany and Italy in the Austrian town of Innsbruck. Kurz said the aim of the Innsbruck summit would be to, "establish measures to close the Mediterranean route." He emphasized that migration to Europe along the southern route must be stopped.

The German interior minister acknowledged that Berlin has yet to reach any consensus agreements with EU countries that would be required to take back migrants denied asylum and that doing so would require, "difficult negotiations." The level of difficulty was on display Thursday in Berlin when Hungarian Prime Minister Viktor Orban flatly rejected the idea that his country would be required to take back migrants from Germany while meeting with Chancellor Merkel.