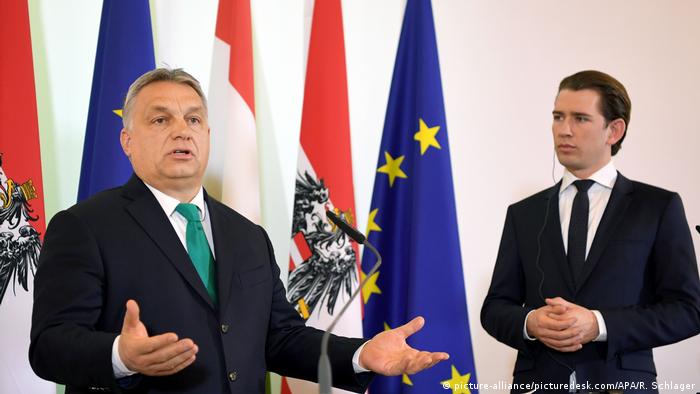 Austria should work to ease tensions between western and the eastern EU members, Chancellor Sebastian Kurz said in Vienna at a joint press conference with Hungarian Prime Minister Viktor Orban on Tuesday.

The countries of the Visegrad Group — Hungary, Poland, Slovakia and the Czech Republic — have repeatedly clashed with other EU states over a policy of refugee relocation since unprecedented numbers of displaced people began arriving in 2015. Orban has been especially vocal in his rejection of EU migrant quotas, which would see some people relocated to Central Europe.

- 'You wanted the migrants — we didn't,' Orban tells Germany

- Rising nationalism and an EU split

On Tuesday, Kurz seemed to back Orban by saying the quota scheme "isn't working" and called for a new asylum system.

"We have to stop illegal immigration in order to ensure security in Europe," the 31-year-old Kurz said. "I am glad that there has been a change in thinking in many European countries in recent years."

Read more: The EU quota scheme - what you need to know

In turn, Hungarian leader Orban said that migration was "the biggest danger today to the hopeful future of central Europe."

"When I say that the future needs to be protected I mean that we have a culture, a Christian culture... We have a way of life, and we want to protect this way of life," Orban said.

Both leaders called for more protection on the EU's external borders. At the same time, Kurz and Orban denied recent speculation that Austria might join the Visegrad Group.

"Our great aim in Austria is to be a bridge-builder in this respect between the Visegrad states and the countries in Western Europe," Kurz said.

Later on Tuesday, Orban was scheduled to meet Austrian Vice Chancellor Heinz-Christian Strache from the far-right Freedom Party (FPÖ), which serves as a coalition partner for Kurz's conservatives. Both parties called for a hard stance on immigration during last year's election campaign.

While the governments of the neighboring countries seem to have similar views on immigration, Vienna and Budapest remain divided on several other issues.

Most notably, Austria plans to sue the European Commission for allowing Hungary to expand its Paks nuclear power plant.

Another contentious issue is the Austrian government's plan to cut child benefits for people working in Austria whose children live abroad. This could affect thousands of Hungarian workers in Austria, who take about €80 million ($99 million) in child benefits each year.

On Tuesday, Orban said cutting child benefits would amount to "discrimination." Kurz, however, said the proposed changes were "about justice."