The FPÖ, which was formed in the 1950s by former Nazis, is a junior member of Austria's right-wing government. The government wants people to withhold judgment until it can announce its policies. 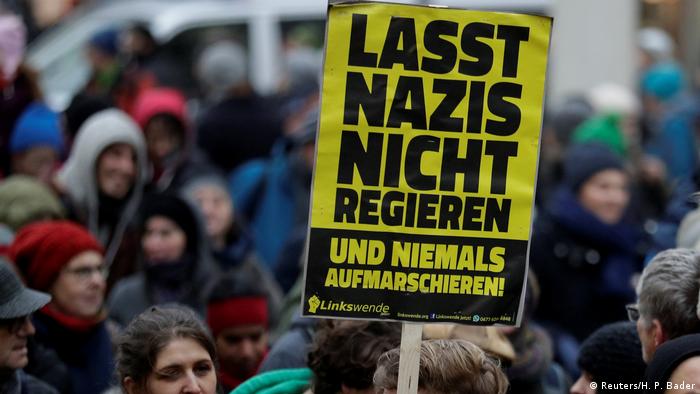 Thousands of demonstrators took to the streets of Vienna on Saturday to protest the inclusion of a far-right nationalist party in the country's new government.

Chancellor Sebastian Kurz's right-of-center People's Party (ÖVP) has formed a coalition with the far-right Freedom Party (FPÖ), which has extreme right-wing and neo-fascist ideas. Kurz insisted the government will be pro-European and called for a wait-and-see attitude from doubters. The government has taken a hard line against migration.

"Our country will not be taken over by these new fascists," shouted Michael Genner, a member of the Platform for Humane Asylum Policy, during the protest.

Police estimated about 20,000 protesters descended on Heldenplatz (Heroes Square) in the city center. Protesters dubbed themselves the "New Year Welcome Committee." Among the groups joining in the march was the Offensive Against the Right and the Platform of Radical Leftists.

"What I fear the most is that this type of government becomes the norm," said one 55-year-old demonstrator who gave her name as Christa. Tobias Grettica, a 47-year-old German, said he was worried "to see nationalism making inroads everywhere, not just in Austria."

Some demonstrators carried placards reading "Never Again" and "Don't Let Nazis Govern" (pictured at top: Lasst Nazis nicht Regieren). Others chanted slogans such as "Refugees should stay, drive out the Nazis." They also called for European governments to boycott meetings with FPÖ ministers.

Kurz campaigned on a platform of limiting immigration. His ÖVP has been in government for years but usually as part of a right-left coalition with the left-of-center Social Democratic Party. But tensions between those two parties last year forced them to part ways.

The far-right FPÖ, which was formed by former Nazis in the 1950s, was last in power from 2000-2005. Their ascent sparked widespread outrage in Western countries at the time.

This time the international response has been more muted, but Austria's left-leaning organizations have vowed to fight the new government.

During the FPÖ's traditional New Year's gathering, party leader Heinz-Christian Strache said the new government would focus on putting an end to illegal immigration. He slammed the "complete failure of those politically responsible" for the surge of migration in 2015, when thousands arrived in Austria.

But FPÖ Interior Minister Herbert Kickl sparked outrage on Thursday when he said the government should "concentrate" asylum seekers, using a word widely associated with Nazi death camps, which are commonly referred to as concentration camps.

His comment prompted the opposition Green Party to warn "language of National Socialism (is) creeping into our way of thinking and feeling."

The FPÖ insists it has left its Nazi past behind and has denounced anti-Semitism. But critics say the party remains racist, xenophobic, sexist and anti-Semitic.

"It is very important that Austrian civil society is mobilized," said Benjamin Abtan, president of the European Grassroots Anti-Racist Movement, who spoke at the demonstration. "The FPÖ are not just populists — they are an enemy of democracy."