Germany′s migrant transfer centers: What you need to know | Germany | News and in-depth reporting from Berlin and beyond | DW | 01.08.2018

The German state of Bavaria has launched the first centers to process migrants at the Austrian border. But what exactly are transfer centers? And are they compatible with German and European law? Here are the answers. 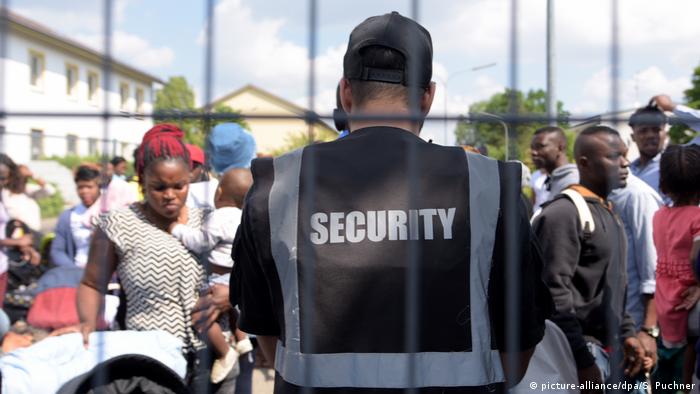 An agreement reached between the conservative CDU-CSU and the Social Democrats provides for facilities on the German-Austrian border akin to the transit zones at airports. The implication is that migrants would be treated as if they had not yet entered Germany. Would such a setup be legal?

No, not if they're coming from anywhere party to the Dublin III Regulation, which covers all the EU as well as Norway, Iceland and Switzerland. Transit zones at airports only apply to people coming from outside Dublin III territory. "For 20 years, border controls have no longer been valid for internal borders," Thomas Gross, a law professor and asylum expert at the University of Osnabrück, told German radio. The transit zone between Hungary and Serbia, for example, cannot serve as a model for Germany and Austria because Serbia isn't part of the EU.

In addition, transfer centers and transit zones don't exist outside the broader context of international law. They remain subject to agreements such as the 1951 United Nations Refugee Convention. "In law, there is no such thing as no man's land," Hendrik Cremer, a legal expert for the German Institute for Human Rights, told foreign journalists in Berlin.

Do conservatives envision closed facilities, or will asylum-seekers be able to move about freely?

Asylum-seekers would be able to move about inside the center, but not come and go as they please. Interior Minister Horst Seehofer of the CSU has argued before the Bundestag that this does not make the facilities closed since people held there still have the option of returning to the countries they came from. This was a crucial issue for the center-left Social Democrats (SPD), who insisted on the name change from transit to transfer centers before they approved the deal.

How long would Germany legally be able to detain asylum-seekers in state facilities while it reviews their asylum applications to enter the country?

According to Article 104 of the German constitution, the Grundgesetz, people can only be held without a court order until the end of the day following the start of their detention. Both Merkel and Seehofer have acknowledged that this is the case. The review of an asylum-seeker's status must take place within that time, or the person must be transferred to other facilities and guaranteed a certain amount of freedom of movement in the facility's immediate region.

Is that enough time for authorities to take care of all the legal formalities they need to?

One of the conservative arguments for the centers is that they'll speed up asylum decisions and deportations. But, according to the Dublin Regulation, applying for asylum sets off a series of events. First, jurisdiction needs to be determined. One important criterion is where a person first arrived in the EU, but it is not all-decisive as there are other factors that can come into play. Unaccompanied minors represent a special case, as do people with family members in a specific country. In addition, refugees cannot be returned to countries where conditions are deemed inhumane.

Once jurisdiction has been established, the two countries involved must reach an agreement for an asylum-seeker to be deported. The asylum-seeker has a right to an appeal guided by independent counsel. Experts have questioned whether this can all be accomplished in a 48-hour window.

"This procedure takes time and can't be completed within such a short limit," Gross said.

"I can't imagine that as a rule it would be possible to do all of that," Cremer said. "I don't know how that would be practical and compatible with the principles of law and order."

Will the German government try to establish centers all over Germany?

No. Thus far, the idea is to set up three facilities in Bavaria near the Austrian border. Armin Laschet, the premier of Germany's most populous state, North Rhine-Westphalia, and a member of the CDU, said he does not want any centers along his state's borders with Belgium and the Netherlands.

How many asylum-seekers would these three facilities likely process?

Statistically speaking, the problem of secondary migration — non-EU migrants moving from country to country within the EU for economic reasons or to improve their chances of being granted asylum — seems far smaller than politicians and the media have recently suggested.

In response to a question from the Rheinische Post newspaper, Germany's federal police said in the first five months of 2018, 4,935 of the 18,024 people who entered Germany without permission did so across Bavaria's border with Austria. That's roughly 27 percent.

What's the difference between transfer centers and Anker centers?

So-called Anker centers are also part of the coalition agreement and Seehofer's much-anticipated "master plan for migration." Anker is an acronym for "centers for arrivals, decisions and returns." These would be large-scale facilities where asylum-seekers could be housed and their cases decided without the tight schedule of transfer centers. The government's coalition agreement specifies that people can be accommodated there for a maximum of 18 months. Still, the Anker centers remain controversial, with some of Germany's federal states — for instance, Berlin — deeming them unnecessary. Seehofer has yet to provide many specifics about the Anker centers.

What role do bilateral agreements play in all this?

Bilateral agreements — for example, between Germany and Austria — can help speed up deportations by streamlining administrative processes. But there are limits to what they can achieve. European law, including the Dublin Regulation, supersedes national law and any individual deal EU states make with one another. For example, even if Vienna and Berlin agree that Austria would take back a refugee from Germany, the refugee could still potentially appeal the agreement and have the decision overturned.