Bavarian Social Democrats getting desperate ahead of election | Germany | News and in-depth reporting from Berlin and beyond | DW | 13.10.2018

Bavarian Social Democrats getting desperate ahead of election

Angela Merkel's junior coalition partners, the SPD, are in an even bleaker mood in Bavaria than her own conservative party. The coalition government's internal feuding in Berlin has clearly damaged the Social Democrats. 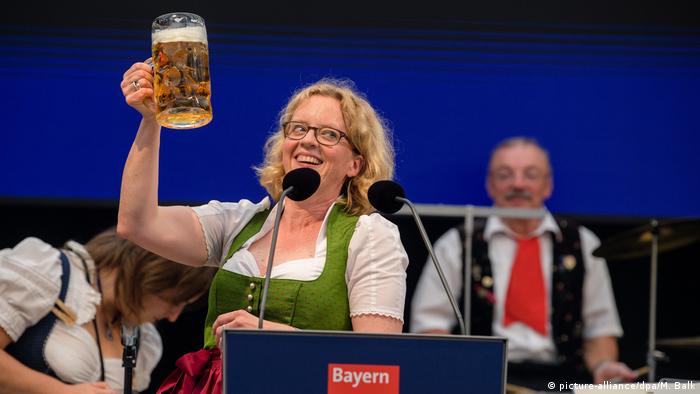 It might have seemed like things looked bleak for Angela Merkel's conservatives in Bavaria ahead of Sunday's state election, but the mood among her junior coalition partners, the Social Democratic Party (SPD), is approaching despair.

A new Insa poll for the Bild newspaper published on Tuesday put the center-left party in fifth place in Bavaria, on 10 percent, a result that would leave the SPD with half of the 20 percent it won in the 2013 election. As Merkel's horse in the race, the Christian Social Union (CSU), is only on 33 percent, that poll also means the two parties are unlikely to have enough state parliamentarians for a grand coalition of the two centrist parties.

Party leader Andrea Nahles was defiant as the last week of a desperate election campaign began. "We stand united, we fight together, and we will do that the whole week," she said on Monday in Munich. "Of course we would've liked better polls, but we're fighting because we believe that a lot of people are still undecided and winnable."

Nahles was also determined to avoid the giving the impression that the party was riven like Merkel's conservatives are. (The chancellor has been conspicuously absent from the CSU's campaign.) There was, Nahles assured reporters, "no space" between her and the SPD's leading candidate in Bavaria Natascha Kohnen. 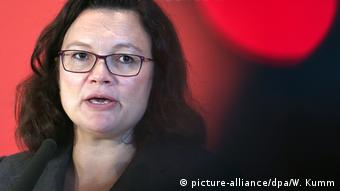 For Kohnen, meanwhile, is nothing short of a basic test of Germany's democracy. "The democratic parties have to work hard, so that many people can say again, 'yes, politicians understand me and they give me the security I need. Then no one will look at the radical extremes and then this country will become a stable factor for Europe again," she told DW last week.

The show of solidarity between the two women was necessary. Kohnen, who is also one of the SPD's deputy leaders, had publicly criticized Nahles only last month when the SPD leader had waved through a government deal that would have seen disgraced intelligence agency chief Hans-Georg Maassen promoted to the Interior Ministry.

The decision was reversed after a public backlash: a less prestigious post was found for Maassen, and the two SPD leaders quickly made up. But the spat highlighted the core issue that has been dogging the SPD since the last general election: How many compromises with Merkel are the Social Democrats willing to make to stay in power? Behind that is the deeper question: Is it time for the SPD to really emerge from the chancellor's centrist pragmatic shadow? And behind that the even deeper question: what has happened to Social Democrats in Germany, and, for that matter, in Europe? After all, a 10 percent result in Bavaria would, at the moment, represent no more than a return to the average results in other German states, especially in the East.

In a letter to party members justifying her initial decision to let Seehofer get his way, Nahles wrote in September, "The SPD shouldn't sacrifice this federal government because Horst Seehofer wants to employ a civil servant who we consider unsuitable."

This message was swiftly defied by Kohnen and other leading SPD figures, as it soon emerged what the overall consensus among grassroots SPD members is: It's not worth propping up Merkel's grand coalition at any price. 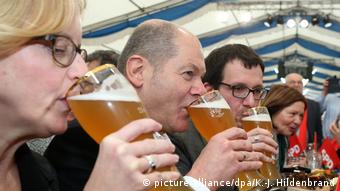 Winning back the old voters, or finding new ones?

Indeed, last September's election-night promise by losing SPD candidate Martin Schulz has not been forgotten: it was time for the party to go into opposition. Many Social Democrats, and many voters, still believe that would've been the right choice, both strategically and morally, and they feel vindicated by the impending failure on Sunday.

Matthias Micus, of the Göttingen-based Institute for Democracy Research, thinks the SPD's problems are much deeper and have been evident for years, only they have become more obvious during election campaigns. "The main problem is that they can't even say anymore what they stand for," he told DW. For that reason, the idea that everything would automatically have been better in opposition is "foolish," he added.

Of course, the Social Democrats are now earnestly promising reforms to win back voters lost when the party took a more centrist course under Chancellor Gerhard Schröder. In a new interview with the weekly Die Zeit, Nahles promised a new social welfare program called "Sozialstaat 2025," (Social state 2025) which would update and reform the Hartz IV welfare agenda implemented by Schröder. "We will free ourselves of the thought prison of agenda politics," Nahles promised.

"This is just a symptom of the directionless searching around of the Social Democrats," said Micus. "We have been hearing this demand from inside the SPD for almost a decade and a half. None of it seems to be a plan, they just give the impression they are being driven by polls."

The split between federal and state parties

There is a widespread impression, shared by their grassroots counterparts in the conservative CSU, of an ever-widening rift between the SPD ministers sitting in their pampered government offices in Berlin and the campaigners on the streets of Munich and Nuremberg.

One state parliamentarian told the Süddeutsche Zeitung that he hears one line above all else at his info-stand: "What's happening up there in Berlin makes you no longer electable." It's true that major SPD cabinet figures, like Foreign Minister Heiko Maas and Finance Minister Olaf Scholz, have made a point of appearing on the Bavarian campaign trail, perhaps to head off post-election accusations that they did not do enough to support their regional colleagues.

But their central message – that the rift in the federal government is all down to the stubborn and rambunctious Interior Minister Horst Seehofer (who also happens to be CSU leader) – is not washing with voters, because the counterargument is all too easy to make: so why are you staying in a coalition with him then? Indeed, the same argument is difficult to dodge when Nahles makes arguments about renter protection that go beyond the coalition agreements with Merkel.

It has become very clear what the result is: the SPD is bleeding voters to the progressive and untainted Green party – currently riding high at 18 percent, in second place. Indeed, the Bavarian election has shown that the two opposing poles of German politics may now be the Greens and the far-right Alternative for Germany (AfD).

While Merkel's coalition dives in the polls, the Greens have been riding a wave of support. Decades after their rebellious arrival on Germany's political scene, the party is poised to become part of a new establishment. (12.10.2018)