German politics fragment as support for big parties erodes | Germany | News and in-depth reporting from Berlin and beyond | DW | 21.09.2018 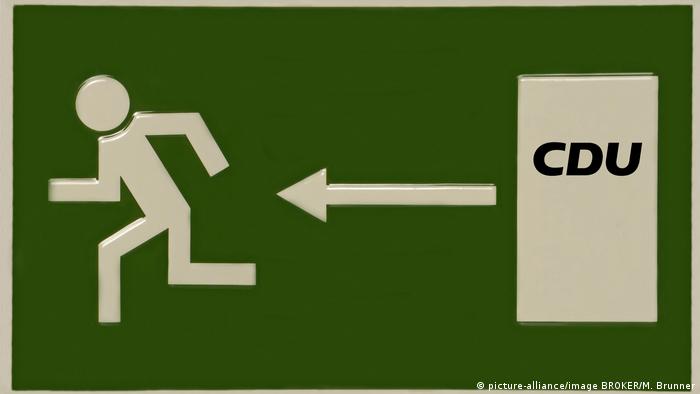 For most of Germany's postwar history, the conservative CDU/CSU and the Social Democrats (SPD) were the undisputed twin poles of German politics. Known as Volksparteien, literally "popular parties," these big-tent associations of interests have led every government since 1949. They were the German equivalents of the Republicans and Democrats in the United States or Tories and Labour in the United Kingdom.

But their popularity is eroding alarmingly. In the words of venerable German political scientist Herfried Münkler, the Volksparteien look increasingly like "last year's models."

The most recent Deutschlandtrend survey, published on September 20, put support for the CDU/CSU at only 28 percent, while a mere 17 percent of respondents said they would vote for the SPD. Their combined total of 45 percent is not only lower than ever before — it would be insufficient to form a government, if a general election were held today. 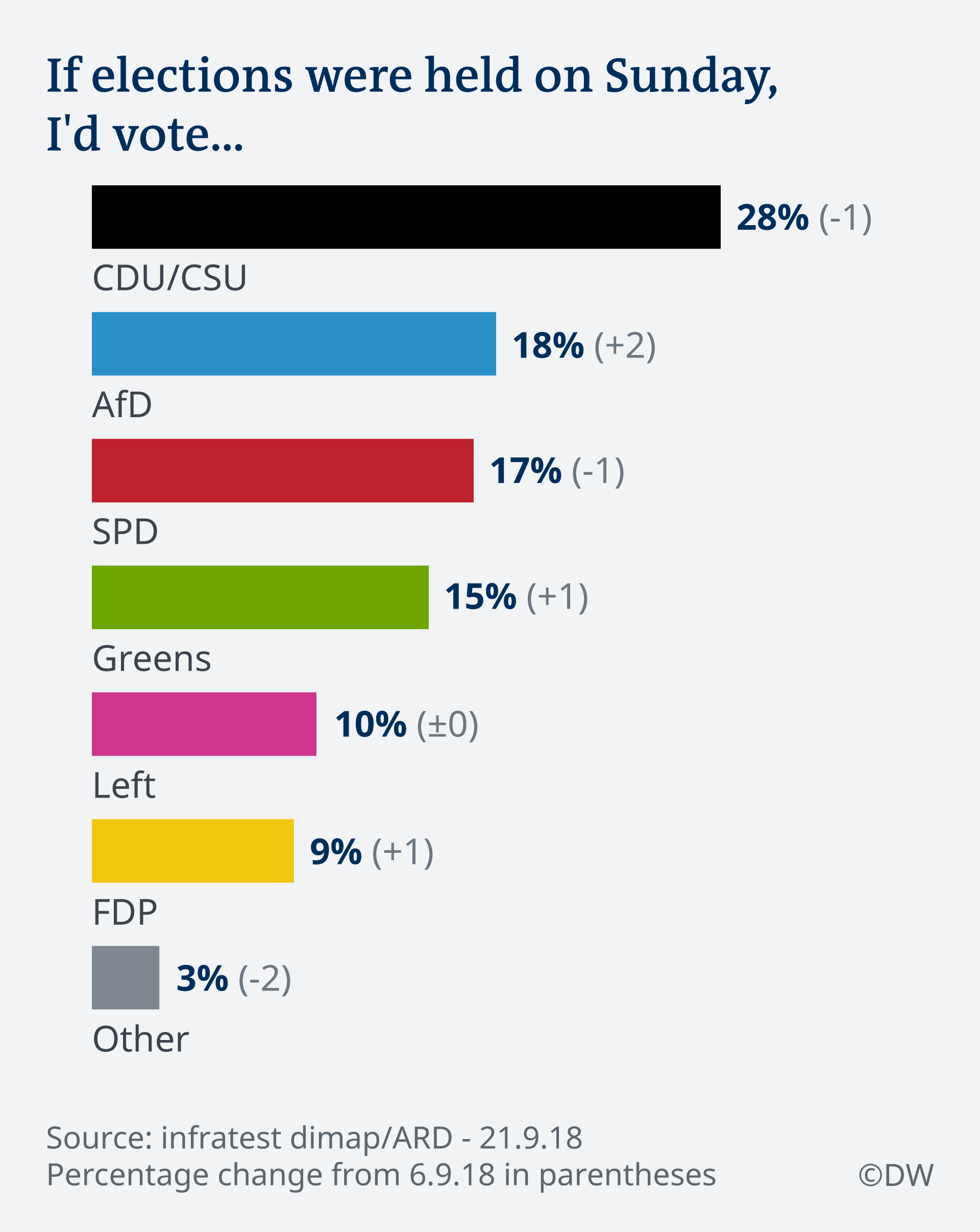 Much has been made of the rise of the far-right populist Alternative for Germany (AfD) party eating away at the mainstream, but all of the country's smaller parties are profiting from the decline of the CDU/CSU and SPD. For the first time in post-war history, there are six major parliamentary groups represented in the Bundestag, and the trend looks set to continue. So what's behind it?

Without a doubt, the dissolution of Germany's traditional political landscape is a national iteration of a global phenomenon. In winner-take-all systems such as the US and the UK, populists articulating widespread dissatisfaction with the status quo have channeled their efforts into public referenda, as is the case with Brexit, or "hijacking" one of the established parties, as Donald Trump did with the Republicans.

Germany is a parliamentary democracy and has a much more differentiated proportional system of representation, allowing smaller "niche" parties that would remain invisible in the US or UK to play a role on the political stage. In times when large numbers of people feel uneasy, they have an advantage over large parties that aspire to stand for the mainstream.

Germany has followed a pattern also seen in countries with similar systems and a plethora of parties such as Sweden, the Netherlands, Belgium and Italy. Indeed, in Germany, political fragmentation and impasses are often referred to as "Italian conditions" — not a compliment given that country's turbulent, sometimes chaotic political past.

The fact that smaller parties now attract the majority of support in Germany fits in with this general trend, which will be difficult for the bigger parties to reverse. The floundering SPD is a case in point.

"The SPD's image simply isn't selling," Grabow told DW. "No matter what they do, it doesn't pay any dividends." 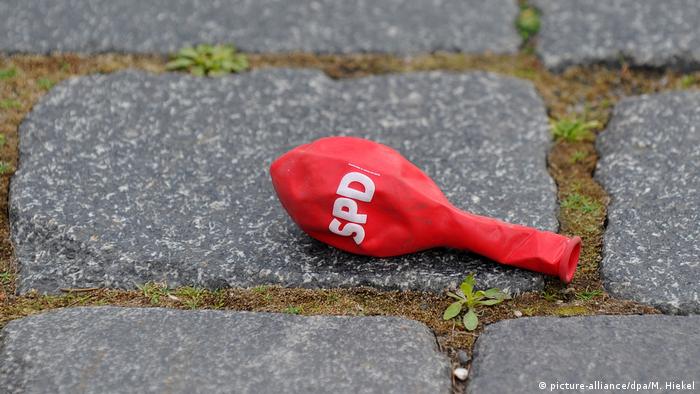 Support for Social Democrats has been leaking out for years

At the same time, a number of specific German factors are hastening the demise of the CDU/CSU and SPD as big-tent parties.

The most obvious is the east-west divide. Voters in formerly communist East Germany feel demonstrably less connected to the traditional powers in West German politics. In the eastern state of Saxony, for instance, which holds regional elections next year, the CDU is currently polling 28 to 30 percent and the SPD only 11 percent, while the AfD can expect 24 percent and their political polar opposite, the Left party, 18 percent. The supposed fringes are overtaking the center.

Across Germany, some of the broad disgruntlement with big-tent party politics is that the CDU/CSU and the SPD have spent much of the recent past working together in a coalition rather than representing alternatives to one another. This has given many voters the feeling that their government consists of an amorphous, self-serving administrative mass with no principles and no interest in their concerns.

"With the CDU/CSU, people don't know what they stand for other than quarreling," Grabow says.

Fighting about migrants, particularly within the conservative bloc, has also led voters to look for other alternatives. The AfD claims that the secret to their success is popular outrage over Merkel's welcoming policy toward refugees, but surveys have shown that the general populace is far less up in arms about that issue than far-right populists are. What turns voters away from the Volksparteien is the sense that government is too dysfunctional to meet this and other challenges. 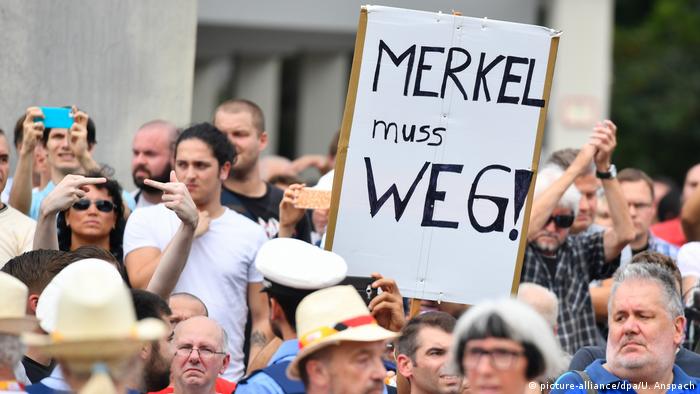 'Merkel must go' signs are becoming more and more common

Could Germany some day have a government headed by a party outside the "big two?" That scenario is growing more and more conceivable. For Grabow, the demise of big-tent parties is something the CDU/CSU need to accept — and a part of a natural political process in which other parties gain in significance because they're more responsive to people's needs and desires. Grabow points to the Greens, who are currently polling around 15 percent under co-leader Robert Habeck, as an example.

"If you've got a good platform, you're halfway there," Grabow says. "You also need someone who can get that platform across well, and Habeck does a really good job of that."

But others are far less sanguine about the future, drawing parallels between the situation now and the German political fragmentation of the early 1930s. Back then the weakness of traditional conservatives and Social Democrats was exploited to catastrophic effects by a far-right populist party — the National Socialists.

"We're going to look back with deep sorrow when we remember the days of the Volksparteien," Münkler predicts, invoking the considerable negative potential of the current political sea change in Germany.