Polls open in eSwatini, where king has absolute rule

A country with no political parties and an absolute monarch, critics have called eSwatini's elections a sham. Authorities claim the polls "preserve its very rich cultures and traditions." 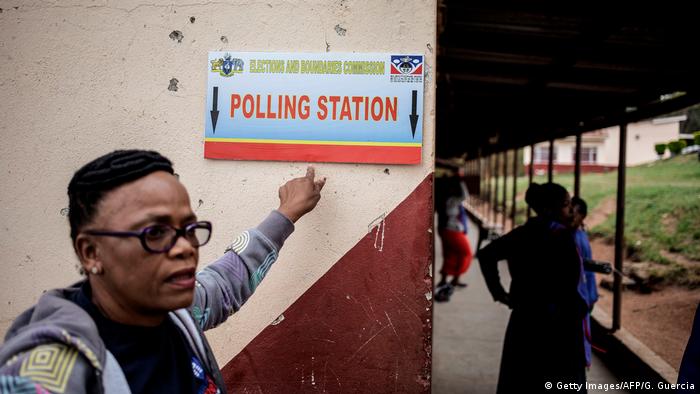 The tiny African kingdom of eSwatini, formerly Swaziland, voted on Friday in elections that are seen as largely undemocratic.

Political parties are banned from participating in the vote and King Mswati III — one of the world's last absolute rulers — holds complete control over the parliament and government, as well as the judiciary, civil service and security forces.

In addition to handpicking the prime minister, he can veto legislation and is constitutionally above the law.

"Elections are meaningless and do not allow Swazi citizens to hold their government to account or to meaningfully participate in democracy," said Kaajal Ramjathan-Keogh, executive director of a regional NGO with a focus on eSwatini.

Read more: From Swaziland to eSwatini: What's in a name change?

Out of a population of 1.35 million, the Friday vote will see some 530,000 eligible voters pick from individual candidates who are almost all loyal to Mswati.

The winners from the 59 constituency ballots get seats in parliament, along with 10 lawmakers appointed directly by the king.

The monarch has ruled since 1986. He made headlines in April this year, when, without warning, he changed his country's name from Swaziland to eSwatini, meaning "land of the Swazis."

He has 15 wives and more than 20 children and is reported to be very wealthy, while 63 percent of the population lives below the poverty line. The king also has a reputation for jailing journalists and critics.

Commonwealth election observers have questioned the credibility of the elections in the past, and an EU Election Experts Mission that monitored the 2013 vote found the "main principles for a democratic state are not in place."

"The election is a farce, of course," Bheki Makhubu, editor of The Nation monthly magazine, told French news agency AFP. Makhubu spent 15 months in jail from 2014 to 2015 for contempt of court after exposing misconduct among judges.

"The king is the executive authority of all things, based on the presumption he is the wisest of us all," Makhubu added.

But authorities say the exclusion of political parties puts local constituencies front and center in the vote and creates a close link between citizens and elected representatives.

"To the critics, it is important to say that there is no 'one size fits all' democracy or system of government," Dlamini said. "This system is a perfect fit because eSwatini is a modern-day country that has chosen to preserve its very rich cultures and traditions."

Unrest ahead of vote

Political parties were banned outright by the king's father in 1973, and there are still severe restrictions despite a 2005 constitution that is meant to guarantee their rights.

The Pudemo party, which was labeled a terrorist organization under laws introduced in 2008, called for a boycott of the vote, describing it as "fixed" by the king.

In the lead-up to the polls, there has been some unrest in the country, with the Southern African Litigation Center (SALC) condemning a police crackdown this week on a workers strike planned by the country's main trade union.

"The protests are taking place in the context of vast inequality and where the monarchy maintains a lavish lifestyle," the NGO said in a statement.