Moscow and Tehran are both cozying up to North Korea as the White House's make-or-break policy flounders. While their motivations are different, they're both trying to seize a strategic international chance. 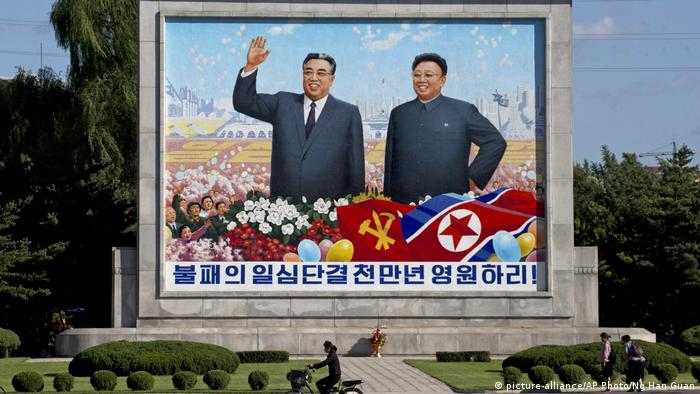 Earlier this week, Russian President Vladimir Putin hosted North Korean leader Kim Jong Un, welcoming him with a lavish reception in the East Russian city of Vladivostok. The picture was at odds with the clumsy February summit in Vietnam between Kim and US President Donald Trump, who walked out during the crucial negotiations. In Vladivostok, Kim called Trump's approach "a unilateral attitude in bad faith" and instead described ties with Moscow as "strategic and traditional relations."

Russia isn't the only country to make significant overtures to North Korea at a time when Trump's make-or-break approach to foreign policy appears to be floundering.

On Sunday, Iranian Foreign Minister Mohammad Javad Zarif announced he would "soon" travel to North Korea, without providing further details of the visit. But the timing of the announcement could not have been more strategic.

The Trump administration's attempts to push through the denuclearization of the Korean Peninsula with high-stakes summits have lent the North Korean regime a certain legitimacy in international affairs, giving way to bolder approaches from Moscow and Tehran.

Iranian relations with North Korea were first formed in the 1980s during the early days of the Islamic Republic and gained prominence throughout the decade as Pyongyang became an intermediary arms supplier for Tehran during the Iran-Iraq War.

Relations later expanded when the Soviet Union collapsed in the early 1990s, cutting off North Korea's supply of subsidized gas. Pyongyang looked to Iran, one of the few oil-rich countries it maintained diplomatic relations with, to meet its energy needs.

Historically, North Korean-Iranian relations were formed out of necessity. Zarif's announcement of his upcoming visit to North Korea highlights that very bond at a crucial moment for Iran. Oil has long been considered a major lifeline for Iran's economy, and earlier this week, the White House announced it would end sanctions waivers for Iranian oil.

As Pyongyang seeks to circumvent its own sanctions, which cap how much oil it can receive from countries, Iran is looking to bolster its oil exports to countries through small-scale actors "with extremely limited exposure to US sanctions enforcement," wrote Elizabeth Rosenberg, former senior adviser to the US Department of the Treasury, in an op-ed in Foreign Policy magazine.

"Regulators in countries angered by the US policy may look the other way as barter and smuggling activity occurs," she wrote. "As some Iranian oil continues to make its way to market, observers may conclude that US sanctions are not so tough after all, which could supercharge the incentive to push the envelope or breach them."

With Trump's "maximum pressure" policy failing to unify the international community over North Korea and Iran, a fractured response could provide new opportunities for both.

Compared to Iran's reaction to a sanctions squeeze, Russia is instead seeking to strengthen its role in Northeast Asia.

Throughout the Cold War, Moscow was one of Pyongyang's biggest supporters. Along with China, the Soviet Union backed Pyongyang during the Korean War from 1950-53, which split the Korean Peninsula along ideological divisions. In the 1950s, Moscow also provided North Korean scientists with basic knowledge to develop its own nuclear arsenal.

Russia regularly provided aid and armaments to the North Korean regime throughout the second-half of the 20th century, making it a key guarantor and stakeholder of regional security. But when the Soviet Union broke apart in 1991, the relationship collapsed with it.

Nonetheless, Moscow and Pyongyang's historical links provided an avenue for Russian President Vladimir Putin to re-establish a working relationship with North Korea when he came to power a decade later. 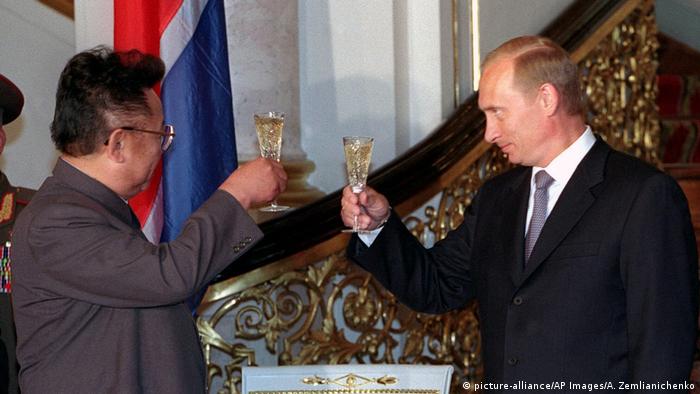 In 2001, Russian President Vladimir Putin welcomed Kim Jong Il to the Kremlin to reconcile relations between Moscow and Pyongyang

As such, Russia's latest overture represents a shift from reconciling relations to securing its political and economic position in the region. According to Stephen Blank, a veteran researcher at the Washington-based think tank 38 North, Russia has as much to gain from deepening relations as North Korea. For Moscow, major infrastructure and energy projects are at stake along with its political and diplomatic clout.

"Now that North Korea wants Russian support to help alleviate its domestic conditions and provide political backing for a negotiating strategy that can secure tangible gains for North Korea, Moscow will likely seek quid pro quos [an exchange] in the form of North Korean concessions to jump-start these stalled programs and enhance its role in future negotiations over Korea," said Blank.

"We should not underestimate Moscow's desire to appear vital to this process, or what it might be willing to do for Kim to ensure a role for Russian in ever-evolving Korean Peninsula affairs."

In the wake of stalled nuclear talks with the US, Kim is seeking diplomatic assistance from the Kremlin. Russia wants stability on its far-eastern border — but President Putin may have a bigger picture in mind. (24.04.2019)

Since 1948, North Korea has defied international norms to carve out its own place in the world. DW examines the country's controversial history and development of a nuclear program. (03.09.2017)

Pompeo, Mogherini hold tense meeting after Iran rebuke from US

The top diplomats from the US and the EU have met a day after Washington slammed Europe over its stance on Iran. The criticism highlights current strains in trans-Atlantic ties. (15.02.2019)