Russia's Vladimir Putin said he was ready to brief the US on his talks with Kim Jong Un in Russia. Before leaving Vladivostok, Kim accused the US of acting "in bad faith" at the failed Vietnam summit with Donald Trump. 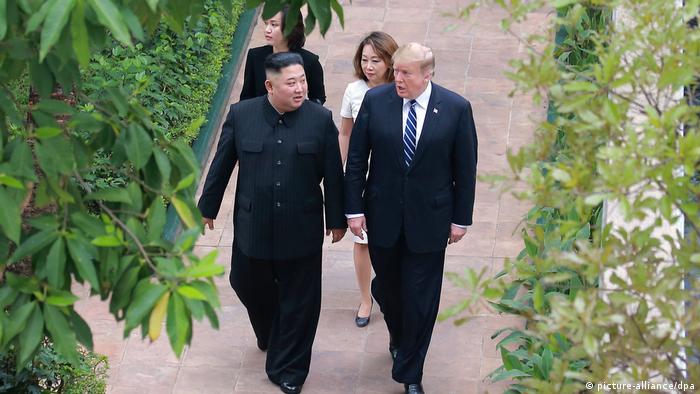 Peace on the Korean Peninsula "will entirely depend on the US future attitude," Kim Jong Un was quoted as saying by North Korea's official news agency KCNA on Friday.

The North Korean dictator wrapped up his visit to Russia on Friday after meeting President Vladimir Putin a day before in Vladivostok. The remarks carried by KCNA were reportedly made during the "unreserved and friendly" talks between the two leaders, with the meeting focusing on the international effort to disarm North Korea of its nuclear arsenal.

Kim Jong UN accused the US of breaking a trust over the February meeting with Donald Trump in Hanoi.

"The situation on the Korean peninsula and the region is now at a standstill and has reached a critical point where it may return to its original state as the "US took a unilateral attitude in bad faith at the recent… summit talks," Kim said.

The talks with Trump ended without any results. In March, Trump confusingly claimed he had dropped some North Korea sanctions because he "likes" Kim.

The latest summit with Vladimir Putin also did not produce a joint statement or concrete pledge. However, both leaders seemed eager to tout the friendship between Moscow and Pyongyang, and Putin signaled Russia was ready to take more responsibility for Pyongyang's denuclearization.

Putin also said he was willing to share details about the summit with the US. The Russian leader also said Kim would be willing to disarm, providing there were security guarantees.

After talks and dinner with Putin on Thursday, Kim Jong Un laid a wreath at a ceremony honoring war dead near the headquarters of Russia's Pacific Fleet on Friday. He also had lunch with the local governor and business people in Vladivostok, before boarding his armored train for the return journey to North Korea.

During the summit, Kim invited Putin to visit him in North Korea "at a convenient time" and the invitation was "readily accepted" according to the KCNA report.