In the wake of stalled nuclear talks with the US, Kim is seeking diplomatic assistance from the Kremlin. Russia wants stability on its far-eastern border — but President Putin may have a bigger picture in mind. 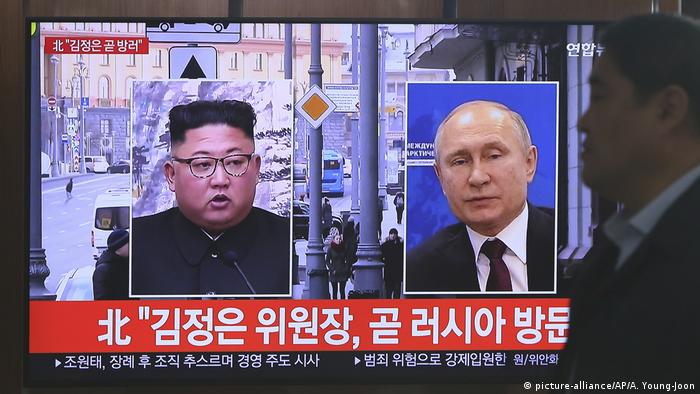 Kim's special armored train had to travel 684 kilometers (425 miles) from Pyongyang to meet Russian President Vladimir Putin on Russky Island, which is joined to the mainland by a bridge just near Vladivostok. Presidential aide Yuri Ushakov confirmed that apart from Russian-North Korean bilateral relations, the main focus of the talks Thursday will be on denuclearization of the Korean Peninsula. "Russia intends to help consolidate positive trends in every way," he said of the crisis.

The meeting is Kim's first with Putin since he took office in 2011. And that is not for lack of trying on the Russian side. Since Kim began a flurry of diplomatic activity last year, Russia has invited him several times. 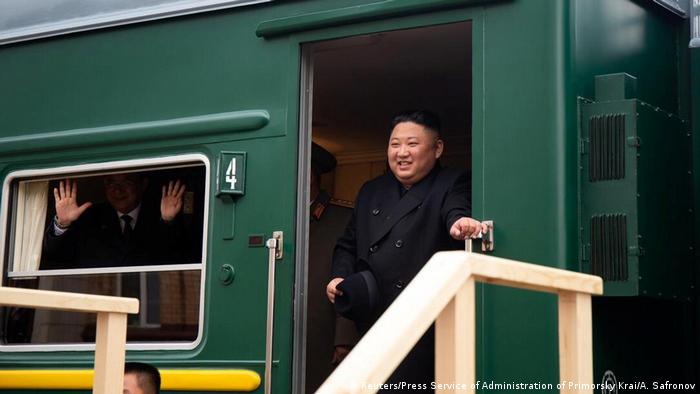 According to Konstantin Asmolov from the Center for Korean Reasearch at the Russian Academy of Sciences, "for Russia, its not so much denuclearization itself that is important, it's stability on the Korean Peninsula." He added that keeping dialogue going is important for Russia: "We don't need an additional conflict on our borders."

Tensions across the Pacific

The meeting comes as dialogue between the United States and North Korea has stalled. At a second summit between Trump and Kim in Hanoi in February, North Korean officials ended up walking out. The US claimed that North Korea had demanded all sanctions imposed over its nuclear weapons and ballistic missile programs be lifted completely, a charge North Korea disputed.

Earlier this month, Pyongyang announced it had tested a new "tactical guided weapon" in what appeared to be a show of strength. Officials have also demanded that US Secretary of State Mike Pompeo be removed from denuclearization talks, accusing him of "talking nonsense" and being "reckless."

Russia waiting in the wings?

Political analyst Asmolov insisted that Kim Jong Un is merely "diversifying his foreign policy" by meeting with Putin. The summit was not an attempt by Moscow to show it could be a more useful intermediary in denuclearization talks than the US.

But other analysts see the meeting as a power move.

"This is essentially a sideshow in the continuing saga between Pyongyang and Washington," the head of the Carnegie Research Center in Moscow, Dmitry Trenin, wrote on Twitter. Trenin said the summit allows North Korea to show "it has options" when it comes to foreign policy, while Russia will use the summit to "score diplomatic points by demonstrating its relevance."

In any case, Russia is trying to keep all the negotiating parties on side in the process. It seems the meeting between Kim and Putin was discussed in advance with Washington. Last week, Russian officials met with their US counterparts to talk North Korea. 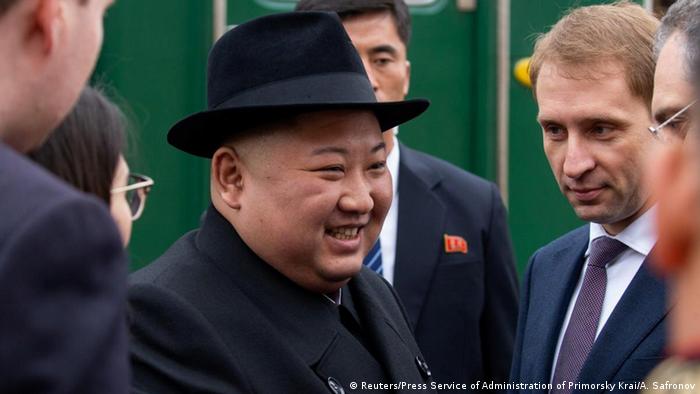 Kim was welcomed at the border

Russia also appears to be keeping China in the loop. After all, China is North Korea's biggest trade partner, which gives it huge leverage over the country. Putin will travel to Beijing for China's "Belt and Road Forum" immediately after his meeting with Kim. Kremlin officials did not explicitly mention that North Korea would be on the agenda when Putin meets Chinese President Xi Jinping at the forum.

In 2017, China and Russia wrote up a road map to settle the North Korea crisis. Putin aide Yuri Ushakov was at pains to emphasize the plan's importance again ahead of the Putin-Kim meeting. He pointed out that things are going according to the plan so far: The first phase of the road map, in which North Korea stops its missile tests while the US halts its joint US-South Korean military exercises, had already been carried out, he said. "Now we have to move on to the second part of the road map. And we will encourage that." Phase two of the initiative outlines more complex negotiations.

According to Artyom Lukin, an international relations scholar at the Far Eastern Federal University in Vladivostok, Russia is indeed using the summit to "demonstrate to the world that it's still an important player on the Korean Peninsula." However, Lukin doubts that Putin is willing to get his hands truly dirty and take on an important mediating role in yet another drawn out diplomatic conflict. "I think Putin's hands are full with so many issues already," he said, citing the civil war in Syria and the crisis in Ukraine in particular. "The question is whether he has any resources to spare for North Korea."

Instead, Lukin argues that Putin's main goal with the summit is simply "to meet Kim Jong-un, to size him up, to establish some personal contact," a factor which the analyst said Putin values. After all, Russia and North Korea have a long history. The Soviet Union was North Korea's first ally and the main backer of Kim Jong Un's grandfather, Kim Il Sung. 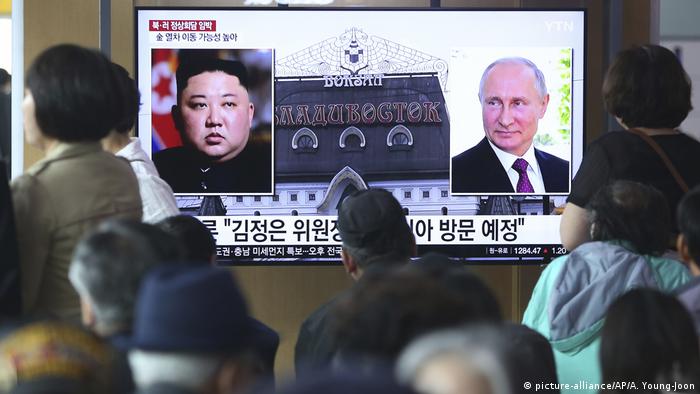 The visit is being watched in South Korea

Kim's economic interests in Russia will likely help the two countries closen their ties. Trade between them was down significantly in 2018 as a result of UN Security Council sanctions against North Korea. Russia also had to reduce the number of North Korean workers employed on its territory from around 30,000 to around 10,000. The revenues that the workers sent home were a vital source of foreign currency for North Korea. Now, according to Korea expert Asmolov, Kim is actively looking for economic opportunities to buoy up his country's strained economy. Putin and Kim are likely to discuss "what can be done" about economic cooperation in "sectors that haven't been sanctioned yet," Asmolov said.

Another economic factor could also help give Russia an important role in negotiations over denuclearization — or at least allow Russia and North Korea to become closer allies: Russia has always opposed the West's policy of arm-twisting and economic pressure against North Korea. After all, Putin knows what it feels like to be under economic sanctions.