After the recent Singapore summit between North Korea and the US, Russian President Putin has issued an invitation to Kim Jong Un. A senior official met with Putin hours before the World Cup opening ceremony. 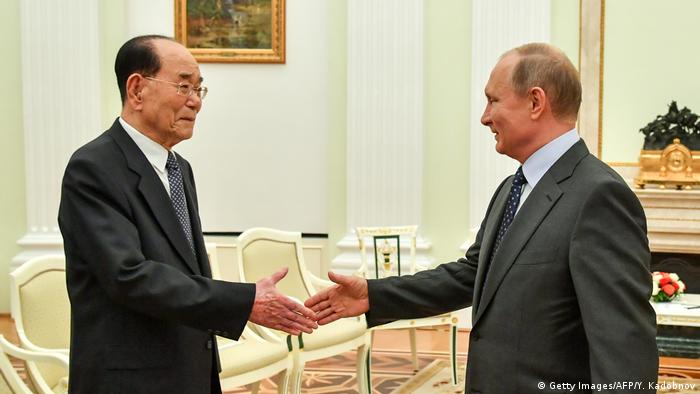 Russian President Vladimir Putin on Thursday invited North Korean leader Kim Jong Un to visit Russia in September. The message was passed to the president of the North Korean Supreme People's Assembly, Kim Yong Nam, visiting Moscow as the World Cup kicks off in the country.

Putin suggested they meet at an economic forum in the far eastern port of Vladivostok in September.

Kim Yong Nam, meanwhile, handed the Russian leader a handwritten note from Kim Jong Un, the contents of which have not been made public.

At a meeting in the Kremlin before the World Cup opening ceremony on Thursday, the Russian leader said the recent US-North Korean summit had reduced the threat of conflict.

"We welcome" the summit between Trump and Kim Jong Un, Putin said. "Without doubt this is just the first step towards a full-blown settlement."

A potential conflict over North Korea had "worried the entire world and could have entailed grave consequences, including a major military conflict," Putin went on. "The meeting helped push back that unfavorable scenario and raised the prospects for solving all the problems with peaceful and diplomatic means."

On Wednesday the Kremlin said the recent summit had showed that Putin had been right to support direct dialogue to reduce tensions with North Korea.

Moscow one of Pyongyang's few friends

Moscow is one of the few countries to have had a trade and political relationship with North Korea and even faced allegations of helping Pyongyang stay afloat amid the toughest international sanctions targeting its oil supply.

Russia and China have proposed a joint de-escalation plan in which the North would suspend its ballistic missile program in exchange for the US and South Korea ending joint military exercises.

President Moon Jae-in has welcomed the diplomatic "success" between Washington and Pyongyang, but many South Koreans believe it's not wise to give up on security guarantees. Fabian Kretschmer reports from Seoul. (12.06.2018)

Donald Trump has made progress with North Korea's regime. In the spirit of Cold War II, the Kremlin will use every opportunity to complicate the US's North Korea policy, Russian journalist Konstantin Eggert writes. (02.06.2018)

In the wake of the US-North Korea summit, South Korean democrats are meeting to discuss the future of defense whereas conservatives are calling the outcome a one-sided victory for Pyongyang. Fabian Kretschmer reports. (13.06.2018)