Trump-Kim summit: South Koreans wary of losing US defense assurance | Asia | An in-depth look at news from across the continent | DW | 12.06.2018

President Moon Jae-in has welcomed the diplomatic "success" between Washington and Pyongyang, but many South Koreans believe it's not wise to give up on security guarantees. Fabian Kretschmer reports from Seoul. 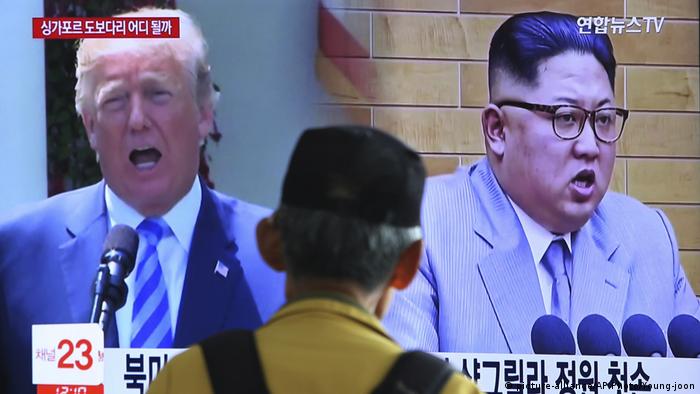 The summit in Singapore on Tuesday between US President Donald Trump and North Korean dictator Kim Jong Un was received in South Korea with a mix of euphoria and guarded optimism.

After the summit, South Korean President Moon Jae-in said it was a "historic event that has helped break down the last remaining Cold War legacy."

Moon also personally commended both Trump and Kim for their "courage and determination" and called the summit a "daring step toward change."

The image of Trump and Kim signing an agreement with their countries' flags in the background was indeed astounding when one considers Washington and Pyongyang have no formal diplomatic relationship.

The four-point joint statement between Washington and Pyongyang, however, was relatively short and vague. And while Pyongyang committed to work on "complete denuclearization," no immediate, concrete measures were outlined.

More important for South Korea were President Trump's statements during an hourlong press conference, in which he said that the US would be stopping joint military maneuvers with South Korea, as long as the talks with Pyongyang are ongoing.

For the North, this provides an incentive for the communication process to continue. Additionally, Kim promised to close another rocket testing facility. But for the South, an important defensive posture may be compromised.

South Korean conservatives criticized the move toward diminishing military cooperation with the US. Hong Joon Pyo, speaker for the conservative Liberty Korea Party, wrote on Twitter that "South Korea's national security is on the edge of a crisis."

The role of China is also looming large in the background as Pyongyang begins to publically commit to reducing its weapons capacity.

Chen-shen Yen, a professor at the Institute of International Affairs at National Chengchi University in Taiwan, told DW that China probably has provided a kind of "guarantee" for North Korea in the background.

"If the US changes its mind, China would continue to secretly help North Korea either through military capability or with a security guarantee," said Chen. "It is only because of potential promises from Beijing that Kim was able to appear so self-confident in Singapore."

In the South Korean capital, there were mixed reactions to the summit. Kim Sang-jin, a music professor at Seoul National University, told DW that South Korea should be fully independent and eventually insist on the withdrawal of US troops.

"In my opinion, this process should take place very slowly," he said. "The younger generation wants this to happen quicker than I would prefer."

Oh Jin-hyun, a 60-year-old shop owner in Seoul, told DW that joint military maneuvers with the US were important for defense.

"Even if the mood between North and South has become friendlier, we still have the right to our own defense," he said. "I don't think we should give up military exercises with the US."

Jin-hyun added that he thought the summit was positive. Most important for him was the potential to once again see family members that he has been separated from since the Korean War in the 1950s.

South Korean local and parliamentary elections are set to take place on July 13, and they too may have an effect on the development of inter-Korean relations.

There are over 4,000 political posts at the local level up for election, including the mayor of Seoul, along with 12 seats in the South Korean National Assembly. President Moon's Democratic Party of Korea currently has 123 out of 300 seats.

"According to polls, Moon could obtain a left-leaning majority in parliament and be able to put his North Korea policy into law," Sven Schwersensky, director of the Friedrich-Ebert Foundation's office in Seoul, told DW. "This continuity could give Kim Jong Un confidence."

Read more: Trump-Kim summit — which country has the strongest military in the region?