After a 65-year freeze between their countries, North Korea's Kim Jong Un and the US's Donald Trump have agreed to be reasonable with each other. Of course, DW's Frank Sieren writes, China played an important role. 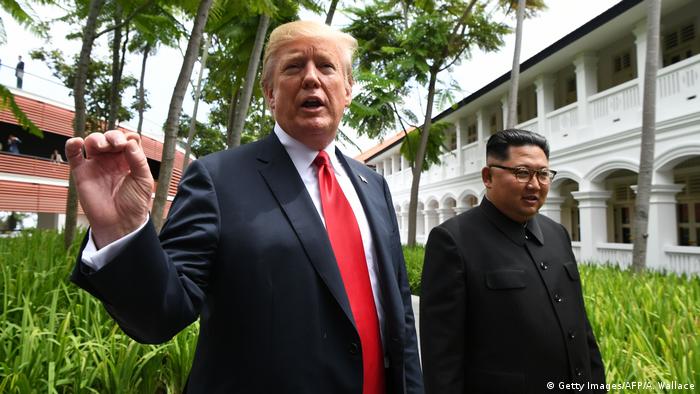 There was a carnival atmosphere at the historic summit in Singapore. Donald Trump impersonators were on hand, as was the US basketball star Dennis Rodman, who turned up to support his friend Kim Jong Un, but also peddled a cryptocurrency.

And, indeed, the fact that the US and North Korean leaders are getting on is something to celebrate.

The world has become a bit more peaceful. At least for a while. For a four-hour summit cannot solve a conflict that lasted decades. There are still plenty of details to be chewed over and negotiated. What's encouraging, however, is that both sides seem to want to go in the same direction.

Trump said he wanted to end the US's joint military exercises with South Korea, which he termed as "very provocative." He said he would bring back US troops and save a lot of money. This is a move that has not gone down well with everyone in the US military and surely raised a few eyebrows in Seoul. The president cannot be accused of going too far out on a limb here, however: The sanctions against North Korea remain in force.

Whether the rest of the world likes it or not, Trump now has his historic success. He could help to solve the last great open conflict left over from the 20th century. After their meeting, he and Chairman Kim signed a declaration pledging that the two sides would work toward complete denuclearization. One could not have hoped for more, considering that the two were arch enemies till very recently. But Trump was realistic enough to not put too much pressure on Kim. He said after the summit that he had told his counterpart: "Take your time — we can go fast, we can go slowly."

Kim retains the reins. He set the motion in process when he agreed to North Korea's participating in the Winter Olympics in South Korea and when he met South Korean President Moon Jae-in. Trump just jumped on the bandwagon, so to speak, but he definitely upped the speed.

It was intelligent of Kim to integrate Chinese President Xi Jinping into the process. Despite the hype about Singapore, another thing should not be forgotten: Kim visited the Chinese leader twice in recent weeks, ahead of his meeting with Trump. The photos of Kim and Xi walking along the beach might not be as spectacular as those of Kim and Trump shaking hands, but the talks were probably more far-reaching than the four-hour summit.

China, Germany and the United States must all acknowledge that, even if Kim is a dictator, the 35-year-old is not crazy. He even has an opportunity to become the peninsular Deng Xiaoping by opening North Korea up economically. The country has access to valuable natural resources. But this scenario is a long way off.

The role of China is clear here: It has to ensure that neither side gets ahead of itself and takes too many risks. Like Trump, Xi also favors nuclear disarmament, but he's not at all interested in North Korea's collapse. So, the wise elder will keep his younger protege from being led down the garden path by Trump.