As a series of key international summits draw closer, Pyongyang is seeking support from a traditional ally, while Russia is keen to play a significant role on the international stage. Julian Ryall reports. 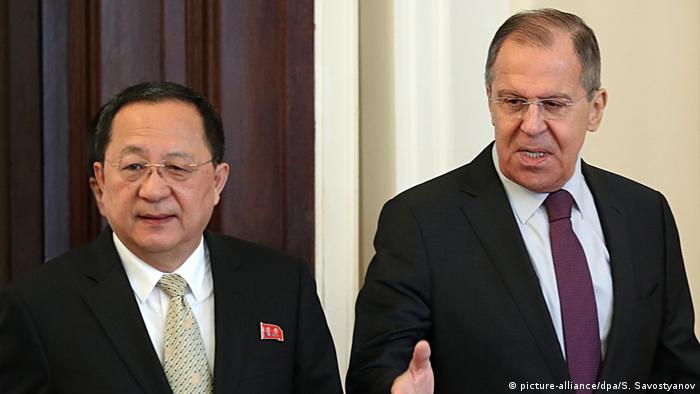 Russian Foreign Minister Sergei Lavrov has accepted an invitation extended by Ri Yong Ho, his North Korean counterpart, to visit Pyongyang at some point in the future, an indication of the close ties that still exist between the two countries despite the international pressure on the regime of Kim Jong Un.

Ri issued the invitation during talks in Moscow on Tuesday, where Lavrov said in a press conference that Russia welcomes the "gradual normalization" of the situation on the Korean Peninsula, as well as plans for direct negotiations between North Korea and the United States to resolve longstanding security problems in the region.

Read more: Russia 'ready to mediate' between North Korea and US

Analysts point out that despite Russia supporting a series of resolutions in the United Nations that have imposed increasingly tough sanctions on North Korea over its development of nuclear weapons and long-range ballistic missiles, bilateral relations have been good in recent years as both Moscow and Pyongyang have been ostracized by the international community to varying degrees.

While North Korea's nuclear and missile programs have been cause for widespread concern, Russia has been broadly condemned for its intervention in the Ukraine, its ongoing support for Syrian President Bashar al-Assad and allegations that it interfered in the US election as well as in other votes in Western nations.

"I see clear similarities in this trip by Ri to Kim Jong Un's recent visit to Beijing to meet Xi Jinping," said James Brown, an associate professor at the Japan campus of Temple University and an expert on North Korea-Russia relations.

"In the lead up to the summit between Kim and South Korean President Moon Jae-in and, ultimately, President [Donald] Trump, North Korea is doing everything in its power to make sure it is in the strongest possible position," he told DW.

"The North wants to make sure that both China and Russia — who have been their traditional allies — are still on their side," he said. "Beijing still has a security guarantee arrangement and although Russia no longer has the security guarantee that existed in the Soviet era, it is clear that Pyongyang's ties with Moscow have been improving in recent years."

Read more: Russia 'ready to mediate' between North Korea and US

That relationship has even improved in the last couple of years at a time when Beijing was "pulling back" from its previously close links with Pyongyang, Brown said.

"But in this recent frenzy of diplomacy, I think that Russia has felt a bit left out and there are suggestions that President [Vladimir] Putin wants a summit with Kim," the analyst said, adding that Moscow and Tokyo could be feeling marginalized by suggestions that negotiations on security issues in Northeast Asia be between four nations — North and South Korea, China and the US.

"It is partly a question of prestige for Russia because they do like to be seen to be involved in international issues, to have that ‘great power' status, plus they have a fairly strong card that they can play later with the US. If Putin can claim to have influence over Pyongyang, it could be used to his benefit when he wants support elsewhere."

Leonid Petrov, head of postgraduate studies at the International College of Management in Sydney and the former chair of Korean Studies at the Sciences Po University in Paris, said the North Korean foreign minister's visit is "very telling, because it demonstrates the level of interest that Russia has in its neighbor in the Far East and, at some time in the future, potentially a summit between Putin and Kim."

And he agrees that North Korea has once again been remarkably skillful in playing one country off against another in order to achieve a positive outcome for Pyongyang.

"The six-party talks were started in 2003 out of paranoia that North Korea might just start to cut deals with other nations on a bilateral basis, leaving out other countries with a stake in the region," he said. "Those talks collapsed, but here we are again in a series of bilateral discussions, which I always thought had the greatest chance of being effective and fruitful."

Brown said pitting other nations against each other is a tried-and-tested North Korean tactic, but one that still seems to work.

"This is what a regime has to do when it does not have much economic strength and is surrounded by larger and more powerful nations," he said. "It turns to diplomacy and is as cunning as it can be. It plays each side off against the other, and even though China and Russia are largely on Pyongyang's side against the US and Japan, that has still not stopped Pyongyang from playing Moscow off against Beijing.

"It is the way they have survived — against the odds — for all these years and it is a necessity for regime survival because they do not have a great deal else going for them," he said.

US: North Korea is open to 'discuss denuclearization'

The message is said to have been delivered through communication channels between officials of the two governments. It is the first time Pyongyang has directly addressed Washington on the future of its nuclear arsenal. (09.04.2018)