US President Donald Trump halted sizable sanctions against North Korea because he "likes Chairman Kim" and considers the measures unnecessary, the White House said. But it was unclear which sanctions Trump had in mind. 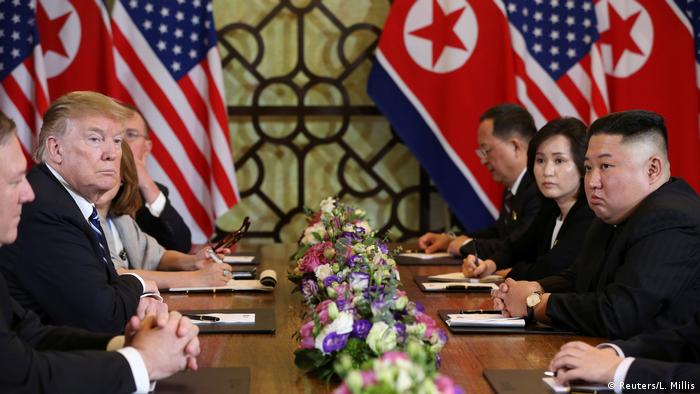 A tweet by US President Donald Trump left journalists scratching their heads on Friday, when Trump said he had nixed "additional large scale sanctions" against North Korea.

"It was announced today by the US Treasury that additional large scale Sanctions would be added to those already existing Sanctions on North Korea," Trump said. "I have today ordered the withdrawal of those additional Sanctions!"

It was not clear what Trump was referring to, as the US Treasury announced no sanctions against Pyongyang on Friday. The only punitive measures linked with North Korea were targeting two Chinese companies that are suspected of helping Pyongyang evade the economic embargo. The sanctions against the companies were announced by the Trump administration on Thursday.

Read more: US and South Korea to scrap major military exercises in spring

At the same time, sources cited by the Washington Post and the AP news agency said Trump was actually referring to an upcoming package of sanctions.

The White House offered a short statement on the issue but provided no details after the Trump tweet.

"President Trump likes Chairman Kim and he doesn't think these sanctions will be necessary," the president's spokeswoman Sarah Sanders said.

Trump's statement comes less than a month after he met North Korea's Kim Jong Un in Vietnam. The much-anticipated summit fell apart after the two leaders failed to achieve progress on the central issue of North Korea's nuclear disarmament.