The Russian and North Korean leaders have ended their meeting in Vladivostok — the first summit of its kind. Russian President Vladimir Putin said Kim Jong Un was willing to disarm under certain conditions. 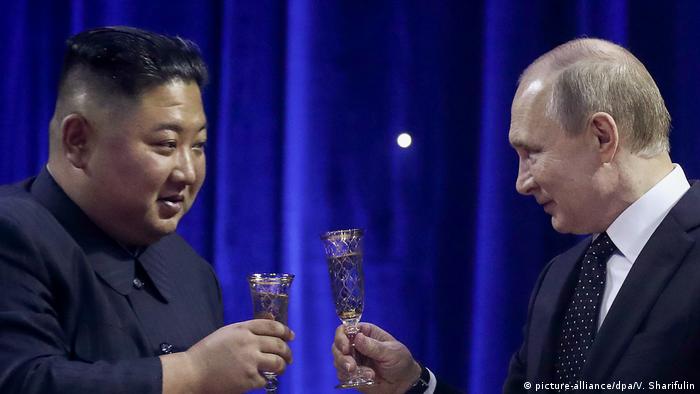 Russian President Vladimir Putin said after his meeting with North Korean leader Kim Jong Un on Thursday that North Korea would need security guarantees before it could pursue nuclear disarmament.

Putin, who did not elaborate on what kind of guarantees Kim wanted, said Russia supported the US call for complete denuclearization of the Korean Peninsula. "This is certainly a common priority," he said.

The Russian president also said he was prepared to discuss what was covered at the summit with the United States.

"There are no secrets here, no conspiracies... Chairman Kim himself asked us to inform the American side of his position," Putin said.

Earlier, Putin bade farewell to Kim outside the venue of their meeting in Vladivostok, after holding talks that were rounded off with a reception toast.

"Ceaselessly bolstering and developing strategic and traditional relations between North Korea and Russia ... is my and my government's firm and unwavering position," Kim said.

The summit was the first face-to-face meeting between the two leaders and Kim's first official visit to Russia. It came some two months after much anticipated talks with US President Donald Trump broke down in Vietnam.

Kim had arrived in the Russian border town of Hasan in his armored train on Wednesday before continuing his journey to Russia's far eastern city of Vladivostok.

While North Korea regards China as its key ally, ties between Pyongyang and Moscow stretch back to the early Cold War, when North Korea was heavily reliant on support from the Soviet Union.

Kim Jong Un's grandfather, the first and "eternal" president Kim Il Sung, was installed as North Korean leader by the Soviet Union in 1948.

In the wake of stalled nuclear talks with the US, Kim is seeking diplomatic assistance from the Kremlin. Russia wants stability on its far-eastern border — but President Putin may have a bigger picture in mind. (24.04.2019)

US President Donald Trump halted sizable sanctions against North Korea because he "likes Chairman Kim" and considers the measures unnecessary, the White House said. But it was unclear which sanctions Trump had in mind. (23.03.2019)