Pompeo, Mogherini hold tense meeting after Iran rebuke from US

The top diplomats from the US and the EU have met a day after Washington slammed Europe over its stance on Iran. The criticism highlights current strains in trans-Atlantic ties. 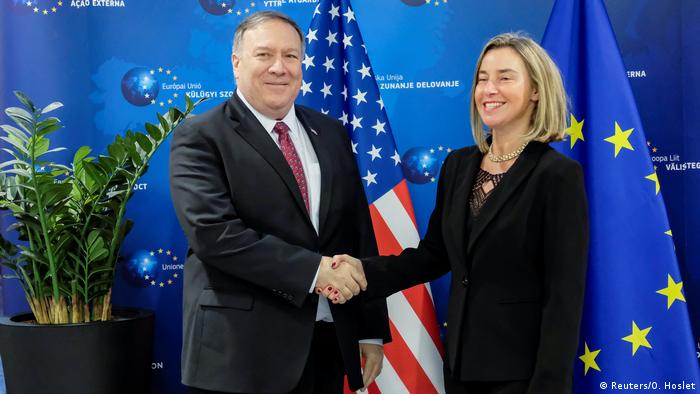 US Secretary of State Mike Pompeo met with top EU diplomat Federica Mogherini on Friday amid tensions caused by a scathing attack by the Trump administration on its European allies over their approach to Iran.

Ahead of the meeting, Mogherini declined to answer a question about a speech by US Vice President Mike Pence on Thursday in which he accused the EU in general, and Germany, Britain and France in particular, of trying to undermine US sanctions on Iran over its nuclear program.

Pence's remarks at a Warsaw peace conference highlighted the differences between Washington and Brussels over the 2015 nuclear deal between Iran and world powers, from which the US under President Donald Trump withdrew last year.

Pompeo himself, who is also known as an outspoken critic of Iran, told reporters at the Warsaw conference that it was not possible to "achieve stability in the Middle East without confronting Iran."

Washington claims Iran has been violating the terms of the 2015 deal, under which Tehran agreed to curb its nuclear program in exchange for the lifting of sanctions. In his speech on Thursday, Pence once more called on the EU to join the US in withdrawing from the deal.

Mogherini, speaking at a NATO meeting earlier the same day, reiterated the EU's view that upholding the deal was essential because it prevented Iran from developing a nuclear weapon.

In January, Germany, Britain and France agreed to evade US sanctions by opening a new channel for non-dollar trade with Iran. The so-called Special Purpose Vehicle (SPV), which is meant to help match Iranian oil and gas exports against purchases of EU goods, will, however, not become operational for months. Diplomats also say that the trade vehicle will be used only for trade on a small scale, for example in humanitarian goods or food.

Iran and the EU