US President Donald Trump has vowed to "forcefully" respond to an alleged chemical weapons attack in Syria. Washington's top UN envoy said "the world must see justice done" after dozens of people were killed in Douma. 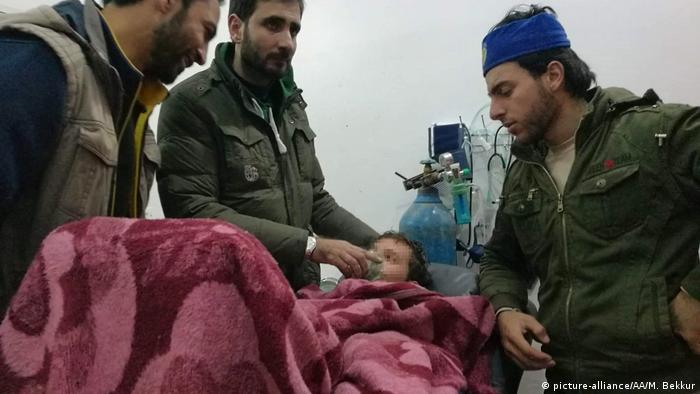 US President Donald Trump on Monday vowed to "forcefully" respond to an alleged chemical weapons attack on Syrian soil.

The US and other Western countries have accused the Syrian regime of conducting the attack, which, according to rescue workers, left at least 49 people dead and dozens more injured, including several children.

"We have a lot of options militarily and we'll be letting you know pretty soon … probably after the fact," Trump told reporters after a special UN Security Council session on the attack.

The EU and Western countries on the Security Council blamed the attack on the regime of Syrian President Bashar al-Assad, which is backed by Russia and Iran.

"If the red line [of chemical weapons use] has been crossed, there will be a response," French government spokesman Benjamin Griveaux said.

Nikki Haley, the US ambassador to the UN, told the session that "the United States will respond" to the use of chemical weapons against civilians in Syria.

"We have reached the moment when the world must see justice done," said Haley. "History will record this as the moment when the Security Council either discharged its duty or demonstrated its utter and complete failure to protect the people of Syria."

However, Russia's UN ambassador Vassily Nebenzia was quick to deny that chemical weapons had been used in Douma. According to Nebenzia, Russian investigators were sent to Douma over the weekend and found no evidence that a nerve agent or chlorine had been used in an attack.

The Russian envoy described the allegations as "fake news," saying it was intended to deflect attention from the UK's muddled case regarding the poisoning of former Russian spy Sergei Skripal, Nebenzia said.

The Organization for the Prohibition of Chemical Weapons (OPCW) said it had launched an investigation into the suspected gas attack in Syria. The global watchdog said it was gathering information on the incident through a fact-finding mission.

Despite denying the use of chemical weapons in Saturday's attack, Russia said it was ready to co-operate with the OPCW. Nebenzia said OPCW investigators should fly to Syria as early as Tuesday to investigate the attack, and offered them protection.

A draft resolution circulated ahead of Monday's Security Council meeting suggested that Russia and the Western nations were proposing the creation of a new body to assess the blame for chemical attacks. However, the West objects to Russia's demand for the Security Council to have veto rights over the new body's findings.