The death toll is expected to rise after a suspected chemical weapons attack in one of the last remaining rebel strongholds in Syria, eastern Ghouta. The government and its ally, Russia, have denied the reports. 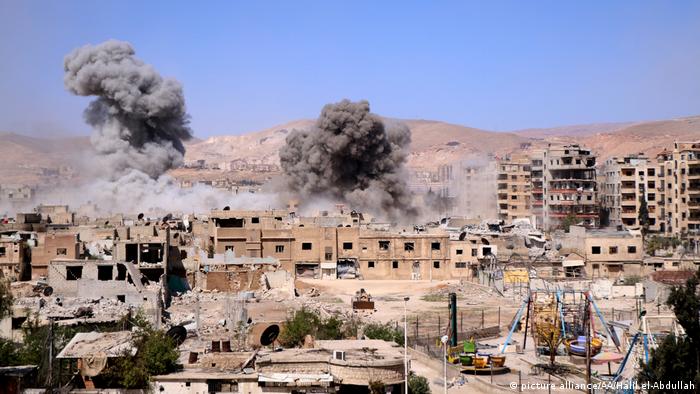 The Syrian White Helmets voluntary rescue group wrote on Twitter on Sunday that a helicopter had dropped a barrel bomb filled with chemicals on the rebel-held city of Douma late on Saturday, killing at least 40 people and injuring hundreds.

"Entire families in shelters gassed to death in Douma, eastern Ghouta, hiding in their cellars, suffocated from the poisonous gas bringing the initial death toll to more than 40," the organization said.

The Union of Medical Care and Relief Organizations (UOSSM) meanwhile said that the death toll was expected to rise to "well over 100." UOSSM also reported that the attack had injured over 500 in eastern Ghouta.

After the alleged attack, Russian-backed government forces have reportedly pressed ahead with their military offensive to retake what is the last opposition pocket near the capital, Damascus. The Britain-based Syrian Observatory for Human Rights (SOHR) said fresh airstrikes were continuing to hit parts of eastern Ghouta on Sunday, despite reports saying the fighters had struck a ceasefire deal with Syrian regime ally Russia.

The SOHR is monitoring the Syrian conflict through a network of activists on the ground.

Basel Termanini, the US-based vice president of SAMS, told the news agency Reuters the total death toll in the chemical attacks was 35.

"Some media outlets, known for their support to the terrorists, claimed that the army used chemical weapons in the city of Douma during its military operations in response to the attacks carried out by the terrorist organization on several Damascus neighborhoods and its surroundings," SANA said.

The chairman of the international affairs committee of Russia's upper house of parliament, Konstantin Kosachev, said on Sunday that the reports were bogus. He added that Washington was attempting to "impede the offensive by Syrian government forces" by claiming their use of such weapons.

SOHR director Rami Abdulrahman said he could not confirm if chemical weapons had been used.

But SOHR did confirm that 80 civilians were killed on Saturday in Douma, having suffocated in the smoke caused by dropping conventional weapons.

‘Russia should be blamed'

The US State Department said on Saturday evening it was monitoring the situation and that Russia should be blamed if chemicals had been used.

"The regime's history of using chemical weapons against its own people in not in dispute," a State Department official said in a statement, referring to the government of Syrian President Bashar al-Assad.

In March, the US warned at the UN that it would react to any chemical weapon attacks in Syria.

The offensive to recapture the last opposition-held area near Damascus has entered its second day. The loss of Douma city would be a devastating defeat for the Syrian opposition. (07.04.2018)