US has 'no better friend' than Germany, says US top diplomat Antony Blinken 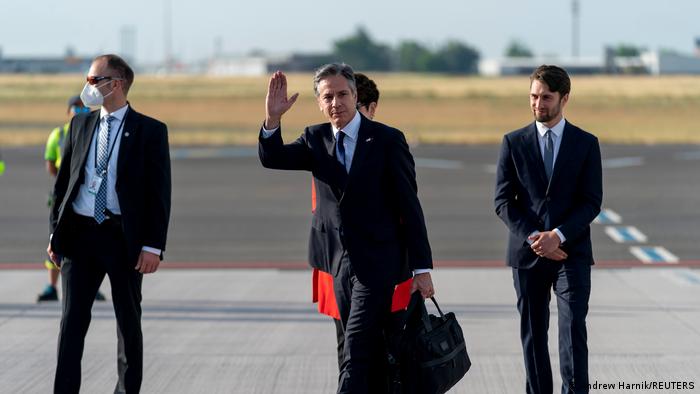 United States Secretary of State Antony Blinken arrived in Germany on Wednesday and made clear that maintaining good relations with Berlin would be high on Washington's agenda.

"I think it's fair to say that the United States has no better partner, no better friend in the world than Germany," Blinken said.

The visit is his second to Europe in just seven days, having accompanied President Joe Biden to leaders' meetings at the G7 and NATO summits.

The US has been quick to emphasize the idea of a fresh start to relations with Germany, with Biden recently saying they were now "stronger than ever." German Chancellor Angela Merkel didn't go quite so far, saying, "We are building on a long history of good German-American relations."

Merkel pointed to multilateralismas the key to problem-solving, noting that it was important not only to "call out geopolitical challenges by name, but also to craft solutions to them together." She was also quick to add, "No matter what controversy we are talking about, we must always keep our channels of communication open." 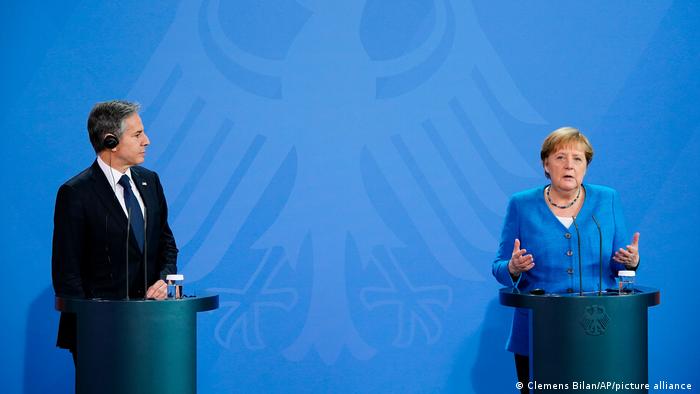 In a joint press conference with Blinken, German Foreign Minister Heiko Maas said he saw a "good chance" of concluding talks on a revival of the Iran nuclear deal.

"Regarding the negotiations in Vienna, they aren't easy — that's been clear in recent weeks," Maas told reporters.

"Nevertheless, we are moving forward step by step in every round of negotiations and we assume that in the context of the [Iranian] presidential election, there's a good chance to conclude them in the foreseeable future," he added.

Maas said there were still "several technical questions to resolve" on the 2015 deal.

"In any case, we are convinced that it's worth it to maintain talks over such a long period of time in order to revive the JCPOA in this way," he added, referring to the Joint Comprehensive Plan of Action, commonly known as the Iran nuclear deal.

During the press conference, Blinken said the Russian-German Nord Stream 2 gas pipeline project undermines the security of Ukraine. The pipeline, now about 95% complete, would double Russian gas exports across the Baltic Sea directly to Germany.

"Our goal remains to ensure that Russia cannot use energy as a coercive tool, as a weapon, against Ukraine, or anyone else in Europe," Blinken said.

The Germans especially, have grown annoyed with the fact that the pipeline is still driving a wedge between the allies. When Maas fielded his second question on the topic Wednesday, he bemoaned: "We could probably save the whole planet, and it would still be about Nord Stream 2."

The United States waived sanctions against the German firm constructing the pipeline, the company's German CEO and several other executives in May.

In waiving the sanctions, the White House rejected recommendations from the State Department and other agencies in favor of imposing the penalties, according to US officials.

Biden's national security adviser, Jake Sullivan, believed the sanctions would do more harm than good in terms of repairing ties with Germany, and that the project was too far along to stop, they said.

"Germany and the United States will keep standing together against any dangerous or provocative actions by Russia, whether that's encroaching on Ukraine's territory, or imprisoning Alexei Navalny or spreading disinformation in our democracies," Blinken added, referring to the jailed Russian opposition leader.

Germany and the United Nations also hosted  conference on the Libyan conflict in Berlin. Blinken, as well as foreign ministers from Russia, Egypt, Turkey and the United Arab Emirates (UAE) attended the German-led mediation push.

The one-day conference focused on maintaining a Libya ceasefire, bringing stability to the war-ravaged country and ending foreign interference in the conflict.

"We have an opportunity that we have not had in recent years to really help Libya move forward as a safe, secure, sovereign country," Blinken said in Berlin alongside Maas.

"We want to set the right course for this and secure international support," he added.

Ahead of the Libyan conference held in Berlin, Roderich Kiesewetter (CDU) from the German parliament's Foreign Affairs Committee, stressed the importance of international engagement.

"I believe that in the long term, we need the presence of international engagement, for example, of the European Union or of the African Union," Kiesewetter told DW.

Regarding elections in Libya, he told DW it is "not clear whether the elections might take place because there are really different interests."

He also said the "German government is holding background talks with those countries who are supporting foreign fighters."

Blinken is set to discuss approaches to countering antisemitismwith German leaders, too.

On Thursday, Maas and Blinken plan to sign an agreement at the Memorial to the Murdered Jews of Europe in Berlin. It will lay out plans for cooperation between the two countries on reinforcing Holocaust remembrance.

Blinken is also likely to discuss the coordinated sanctions imposed on Belarus by the US, the European Union, the UK and Canada earlier this week.

The sanctions were the latest response to the forced diversion of an international flight to Minsk, the capital of Belarus, to detain opposition activist Raman Pratasevich and his girlfriend, who were on board the commercial Ryanair flight.

The EU and the US have targeted dozens of individuals and entities over a crackdown on the opposition after strongman Alexander Lukashenko claimed a landslide reelection for a sixth term last August.

As Blinken touched down in Berlin Wednesday, Germany's Economics Minister Peter Altmaier was just taking off for Washington.

Before departure, Altmaier told reporters, "The new American government has extended a hand and we should grasp it." He noted the fact that several thorny issues, such as steel and aluminum tariffs leveled by the Trump administration or Nord Stream 2, remain. Altmaier said, "We will discuss those topics as friends, too. Yet our goal remains the same, to not let ourselves be cleaved apart ."

Merkel plans to travel to Washington, almost certainly for the last time as chancellor, on July 15.

This story will be updated throughout the day.

Heiko Maas has expressed optimism ahead of the Libyan conference held in Berlin. He has also repeated calls for the withdrawal of foreign fighters and weapons from the country.

US, European partners pledge to 'revive' alliance, work together on Iran

The US, France, Germany, and the UK pledged to mend their alliance and work together to tackle Iran’s nuclear program. This marks a major shift from the Trump administration's "America First" approach.

What the Biden-Putin summit has to do with China

At a low point in US-Russian relations, US President Joe Biden and Russian President Vladimir Putin met face-to-face. China is one of the reasons.