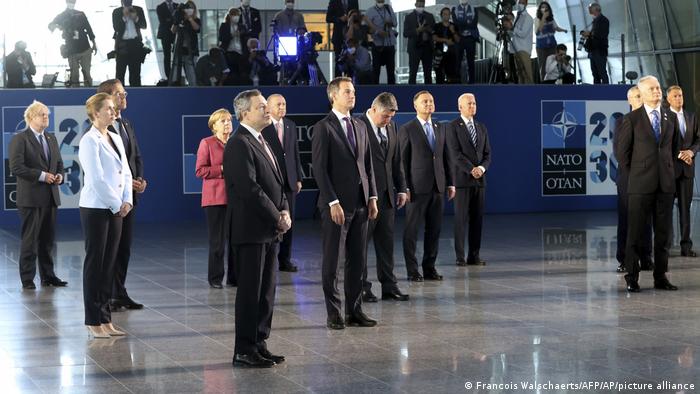 NATO leaders met in Brussels for a summit on Monday

NATO allies branded China a security risk to the alliance for the first time, in a final summit statement released on Monday. The alliance also singled out its historic foe Russia for "aggressive actions."

Leaders from the 30 member states were meeting in Brussels to discuss a wide range of international security issues, summarized in a lengthy 79-point joint communique.

"In the age of global competition Europe and North America must stand up against authoritarian regimes like Russia and China," NATO Secretary General Jens Stoltenberg said in a speech, rounding up the summit.

It was US President Joe Biden's first since taking office, creating a notable change in tone from past events characterized by doubts on Donald Trump's commitment to the Alliance.

China 'is coming closer to us'

The document also outlined NATO's concerns about China's growing military strength and modernization. "China is rapidly expanding its nuclear arsenal with more warheads and a larger number of sophisticated delivery systems to establish a nuclear triad."

It criticized China's "opaque" weapons development programs and its "publicly declared military-civil fusion strategy." It also criticized China for its cooperation with Russia in this area. 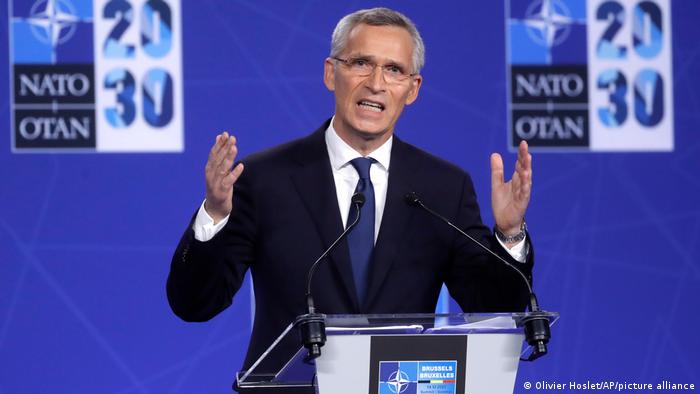 "China is coming closer to us. We see them in cyberspace, we see China in Africa, but we also see China investing heavily in our own critical infrastructure," Stoltenberg said, likely references to China's building of ports in Africa and a row over 5G networks built by Chinese telecoms giant Huawei.

"We need to respond together as an alliance," Stoltenberg added.

But Stoltenberg earlier stressed that: "We're not entering a new Cold War and China is not our adversary, not our enemy."

He added that "we need to address together, as the alliance, the challenges that the rise of China poses to our security."

"If you look at the cyber threats and the hybrid threats, if you look at the cooperation between Russia and China, you cannot simply ignore China," Merkel told reporters. "But one must not overrate it, either — we need to find the right balance."

In a sign of a common position emerging on China, the European Union has already designated Beijing a "systemic rival."

Meanwhile, French President Emmanuel Macron warned that the focus in China should not distract from the core of NATO and its numerous challenges. He stressed that NATO was a military alliance while the relationship with China remains much broader. He pointed out that the East Asian country "has little to do with the North Atlantic."

Russia ties at 'lowest point since the Cold War'

"Russia’s aggressive actions constitute a threat to Euro-Atlantic security," the communique outlined. It condemned Russia for its continual breach of "the values, principles, trust, and commitments outlined in agreed documents that underpin the NATO-Russia relationship."

"Our relationship with Russia is at its lowest point since the Cold War," Stoltenberg said. "We'll keep our defenses strong while remaining ready to talk," he said, albeit stressing that the goal was to avoid misunderstandings and escalation.

In Geneva on Wednesday, Biden and Russian President Vladimir Putin will meet for talks in Geneva as part of the US president's first foreign tour in office.

Ukrainian President Volodymyr Zelenskyy criticized the approach of Biden toward Russia on Monday, saying he would have liked an audience with Biden before Putin.

NATO's relationship with Afghanistan is 'not over'

"Withdrawing our troops does not mean ending our relationship with Afghanistan," but the start of "a new chapter," the communique stated. This follows the organization's commitment in April to draw down its operations in the country.

NATO outlined plans to continue dialogue on Afghanistan with international and regional partners. The organization said it would carry on supporting the ongoing peace process.

Afghanistan has been marked by constant violent attacks on both military and civilian targets amid a peace process between the government and the Taliban. But this violence has surged since May 1, when the United States began to withdraw its remaining forces from the country.

More recently, so-called Islamic State (IS) fighters attacked a group of mine-clearing workers in the north of the country.

Attacks to, from, or within space a 'clear challenge' to security

NATO's communique also looked beyond Earth, saying: "We recognize the growing importance of space for the security and prosperity of our nations."

It added that space would contribute to the organization's deterrence and defense plans and said that secure access to space was "essential."

"We consider that attacks to, from, or within space present a clear challenge to the security of the Alliance," the communique added.

The NATO statement also singled out space as a place that China was making "rapid advances" that "are affecting our security."

NATO reiterated that it will continue "ensuring that Iran will never develop a nuclear weapon," while supporting discussions over resurrecting a 2015 multinational nuclear deal.

The US and Iran have been at locked in a disagreement, ever since the US pulled out of the Joint Comprehensive Plan of Action (JCPOA) in 2018 and reinstated sanctions on Iran.

The US and Iran held indirect talks over reinstating the deal in April but an agreement remains out of reach for now.

NATO, which includes allies who are also JCPOA signatories, suggested that a "restored and fully implemented JCPOA could also pave the way to further address regional and security concerns, including in support of the non-proliferation regime."

NATO to work on its own climate action plan

In order to mitigate these effects, it agreed on a climate action plan and will include climate change considerations into its full spectrum of work. These will range from defense planning and capability development to civil preparedness and exercises, according to the communique.

Belgian Prime Minister Alexander de Croo said Biden's presence "emphasizes the renewal of the trans-Atlantic partnership." He added: "I think now we are ready to turn the page."

"This summit is a continuation of yesterday's G7 and is part of the process of reaffirming, of rebuilding the fundamental alliances of the United States that had been weakened by the previous administration," he said.

"Think that President Biden's first visit is to Europe and try to remember where President Trump's first visit was," he said, alluding to Trump's inaugural overseas trip to Saudi Arabia in 2017.