Russian President Vladimir Putin said he hopes US President Joe Biden will be less impulsive than his predecessor. He also praised Donald Trump as "extraordinary" and "talented." 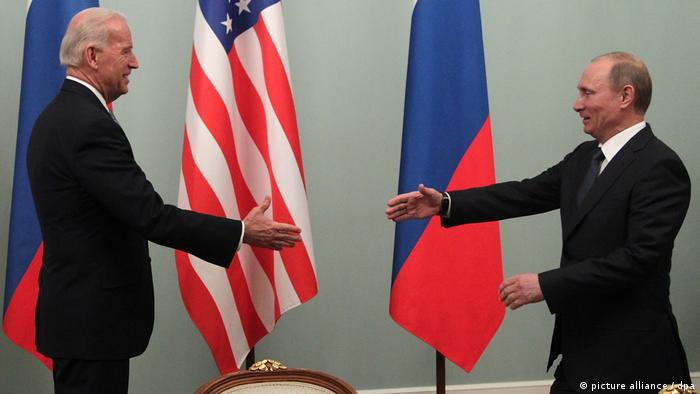 Presidents Joe Biden and Vladimir Putin will meet in Geneva on Wednesday.

Russian President Vladimir Putin, in an interview with US broadcaster NBC ahead of his first meeting with US President Joe Biden, said relations between Moscow and Washington were at their lowest point in years.

"We have a bilateral relationship that has deteriorated to its lowest point in recent years," Putin said, according to an official translation of excerpts of an interview that aired on Friday.

The two leaders will meet in Geneva, Switzerland, on Wednesday as Biden wraps up his first foreign trip as president.

What did Putin say about Donald Trump?

Putin, in the interview, voiced hope that Biden would be less impulsive than his predecessor, Donald Trump.

"It is my great hope that, yes, there are some advantages, some disadvantages, but there will not be any impulse-based movements on behalf of the sitting US president."

Putin described Biden as a "career man" who spent his life in politics, in contrast to the "colorful" Trump.

"I believe that former US President Trump is an extraordinary individual, talented individual ... He is a colorful individual. You may like him or not. But he didn't come from the US establishment," Putin said.

During the 2016 US election, Putin had openly admitted that he supported Trump, who in turn expressed his admiration for the Russian leader.

Since becoming president, Biden has taken a tough stance against Putin and in March described him as a "killer" in light of a series of high-profile deaths.

Asked about the remark, Putin laughed and said such accusations were part of America's "macho behavior."

What's behind Putin's troop maneuvers at the Ukraine border?

What has Biden said about the upcoming talks?

The White House said Biden plans to bring up a range of US complaints at the summit, including ransomware attacks emanating from Russia, Moscow's aggression against Ukraine and the jailing of dissidents.

At the start of his eight-day trip to Europe, Biden insisted that the US was "not seeking conflict with Russia."

"We want a stable and predictable relationship ... but I've been clear: The United States will respond in a robust and meaningful way if the Russian government engages in harmful activities."

How did Putin react to US allegations?

The Russian president denied having any knowledge of the ransomware attacks targeting US companies and infrastructure, according to NBC news. Instead, he called on Biden to reach an agreement with him on cyberspace.

When asked about the deaths of several Russian dissidents, including ex-KGB spy Alexander Litvinenko, who was poisoned in 2006, allegedly by the Russian state, Putin dismissed the question as "verbal indigestion."

"It's just fake news. At the very least, I don't know anything about this kind of thing," Putin told NBC News. "It's just nonsense garbage."

A recent Council of Europe report gave a stark warning on the state of European democracy, saying the democratic environment and institutions "are in mutually reinforcing decline." Dunja Mijatovic spoke to Conflict Zone.

All 14 crew aboard the "Eiho Maru No. 172" have been released after the boat was seized by Russian authorities in disputed waters last month.

Russia recently placed the Berlin-based think tank Center for Liberal Modernity on a list of "undesirable organizations." DW spoke to co-founder Ralf Fücks about Moscow's motives and the implications of the ban.